Armenian mob attacks Turkish family in France after US statement 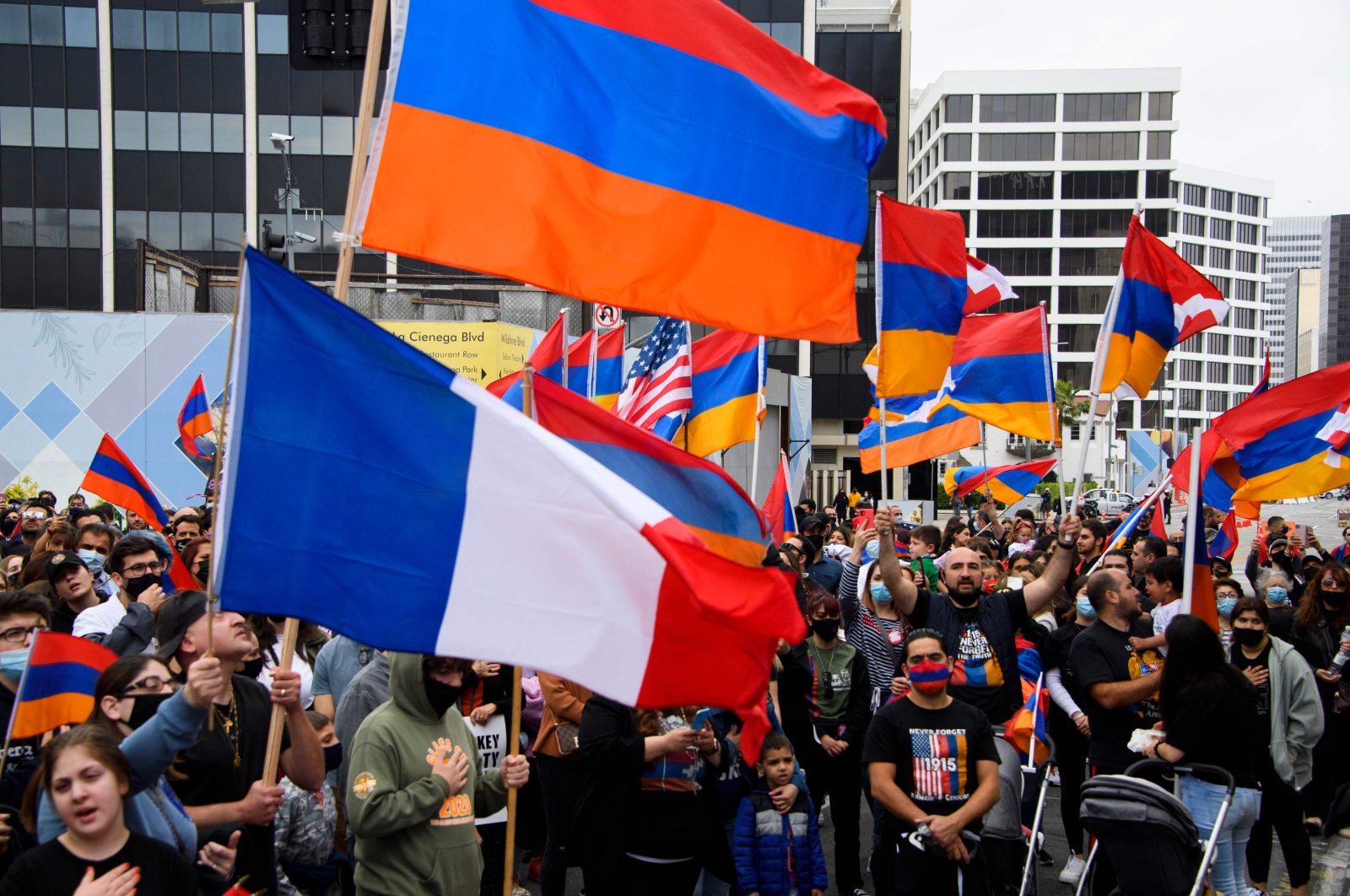 A French flag is waved alongside Armenian flags as people protest outside of the Turkish Consulate on the anniversary of the 1915 events in a demonstration organized by the Armenian Youth Federation (AYF) in Beverly Hills, California, U.S., April 24, 2021. (AFP Photo)
by Daily Sabah with AA Apr 26, 2021 11:45 am
RECOMMENDED

Four members of a Turkish family were injured in an attack by around 40 Armenians in Saint-Die-Des-Vosges, France, following United States President Joe Biden’s statement on the 1915 events.

The group broke into the family's home in the Kellerman district and assaulted them.

Speaking to Anadolu Agency (AA), one of the family members said that on Saturday, an Armenian hit the son from his cousin's family with their car and a dispute broke out between them.

Noting that they had met with Armenians afterward and thought they were tied to the incident, the family member said that later that day, Armenians entered the home of his cousin's family and attacked them with baseball bats, knives and iron bars.

The family member added that one of the attackers also had a gun.

Four people were injured in the incident, the family member said, adding one suffered three fractures to their skull and three were hospitalized, with one of them undergoing surgery.

A member of the Armenian group opened fire into the air with a gun while leaving the scene, said the family member.

The group included an individual who went to the Nagorno-Karabakh region, where clashes took place between Azerbaijani and Armenian forces last spring.

Turkish families in France are often exposing attacks by the Armenian population in the country. The assaults peaked during last year’s clashes between Azerbaijan and Armenia over Nagorno-Karabakh, which was under the occupation of Yerevan since 1994.

In one of these incidents, members of the Armenian community wounded four Turkish citizens while demonstrating on a motorway connecting France’s Lyon and Marseille.

France is an important country for the Armenian diaspora where it conducts anti-Turkey propaganda with the lobby activities of hundreds of organizations.

In France, where Turkish and Islamic organizations have been banned due to accusations of separatist activities, there are 575 associations run by Armenians.

Turkey's position on the 1915 events is that the deaths of Armenians in eastern Anatolia took place when some sided with invading Russians and revolted against Ottoman forces. A subsequent relocation of Armenians resulted in numerous casualties, made worse by massacres conducted by militaries and militia groups from both sides. The mass arrests of prominent Ottoman Armenian politicians, intellectuals and other community members suspected of links with separatist groups, harboring nationalist sentiments and being hostile to the Ottoman rule were rounded up in then-capital Istanbul on April 24, 1915.