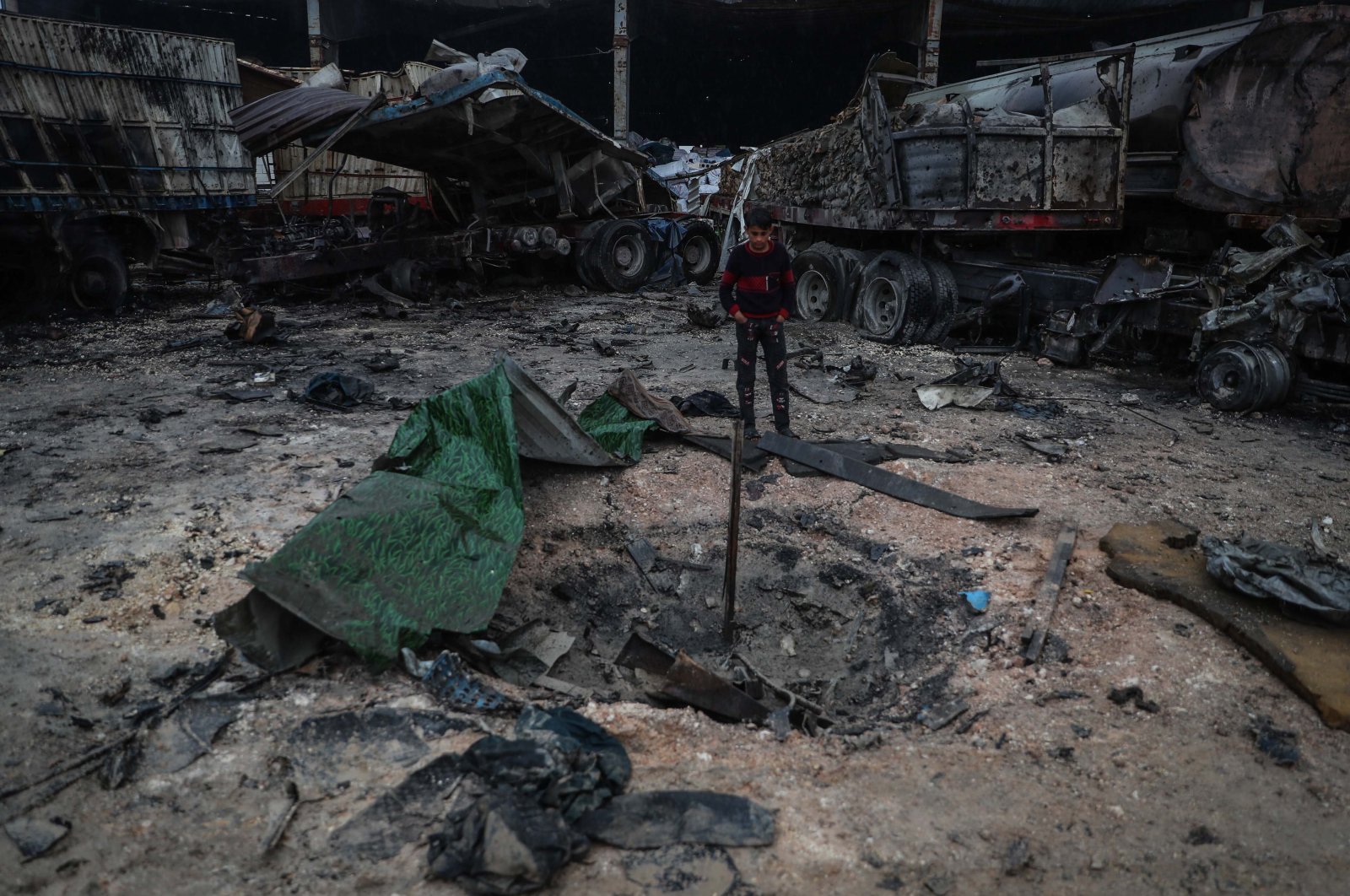 A Syrian child inspects the damage in the aftermath of an airstrike that was allegedly carried out by Russian warplanes on a truck depot near Bab al-Hawa border crossing on the Syrian-Turkish border, Idlib, Syria, March 22, 2021. (Getty Images)
by Dilara Aslan Mar 22, 2021 1:37 pm

One year after the cease-fire between Turkey and Russia for the last opposition bastion, the Syrian regime’s attacks continue despite an evident decline

As March marks both the 10th anniversary of the Syrian civil war and one year since the launch of Turkey’s Operation Spring Shield that led to a fragile truce in Syria’s northwestern Idlib province, a human rights group stated that at least 75 attacks by the Bashar Assad regime and its allies have been recorded since the cease-fire.

“The ceasefire agreement in Idlib in March 2020 was accompanied by the outbreak of the COVID-19 pandemic, which we believe has had a major impact on the capabilities of the Syrian regime army and the Iranian militias affiliated with it. Thus, this contributed to a decline in bombardment operations against civilians, leading to a decline in civilian casualties,” the Syrian Network for Human Rights (SNHR) told Daily Sabah in a written statement regarding the current humanitarian situation in Idlib.

Saying that though airstrikes targeting the province decreased significantly, SNHR pointed out that, “Despite the ceasefire, the ground bombardment carried out by Syrian regime forces and their allies in areas close to the contact lines did not stop, continuing in tandem with the bombing of some areas relatively far from the contact line, such as Ariha city.”

Still, around 300,000 displaced people have returned home, the SNHR stated, indicating that most returned to areas far from contact lines including the Jabal al-Zawiya region, Ariha city and its suburbs – Binnish, Sarmin, Maarrat Misrin as well as the western suburbs of Aleppo province in general and the suburbs of Jisr al-Shughur and Sahl al-Ghab.

The human rights organization underlined that Idlib’s residents also “suffer from widespread poverty and unemployment due to the high population density and the lack of job opportunities.”

A decade on, Assad looks set to win a new presidential election this summer in regime-held areas.

It was a protest hub in 2011 and it officially came under full opposition control some four years later.

A Russian-backed regime offensive in 2019 saw the Syrian regime retake more than half the province.

“Last year, humanitarian organizations began shifting their orientation toward establishing residential villages to house the displaced people rather than flimsy tents incapable of withstanding the harsh weather conditions, particularly in winter and summer,” SNHR continued but noted that their numbers are still low.

Turkish aid organizations have committed to building a total of 52,772 briquette houses by the end of 2021.

The construction is ongoing in 124 different locations in Idlib and a total of 27,665 houses have been completed so far, 17,553 of which are already inhabited.

Despite the deteriorating situation for civilians, the Assad regime and its backers have stepped up their attacks in the past few days.

At least one civilian was killed and two others injured late Sunday in airstrikes by Russian jets in the region.

The attack, which an opposition plane observatory claimed was carried out by Russia, targeted an area near the M4 highway in the Bab al-Hawa border crossing area between the town of Sarmada in Idlib on the Syrian side and Reyhanlı district of Hatay province in southern Turkey.

Earlier on the same day, Syrian regime artillery fire killed seven civilians including a child when it hit a hospital in Idlib’s Atareb town.

"Health facilities are protected under international law and should be safe havens in times of crisis," said Rehana Zawar, IRC director for northwest Syria.

Medical facilities have been hit multiple times in the Idlib region during the war.

Between 2016 and 2019, the World Health Organization (WHO) documented up to 337 attacks on health care sites in Syria's northwest.

Seventy percent of health care workers have fled Syria since the start of the conflict, while after years of bombardment only 58% of hospitals remain fully functional, the U.N. says.