Agreement on Cyprus should be based on two sides' cooperation: Tatar 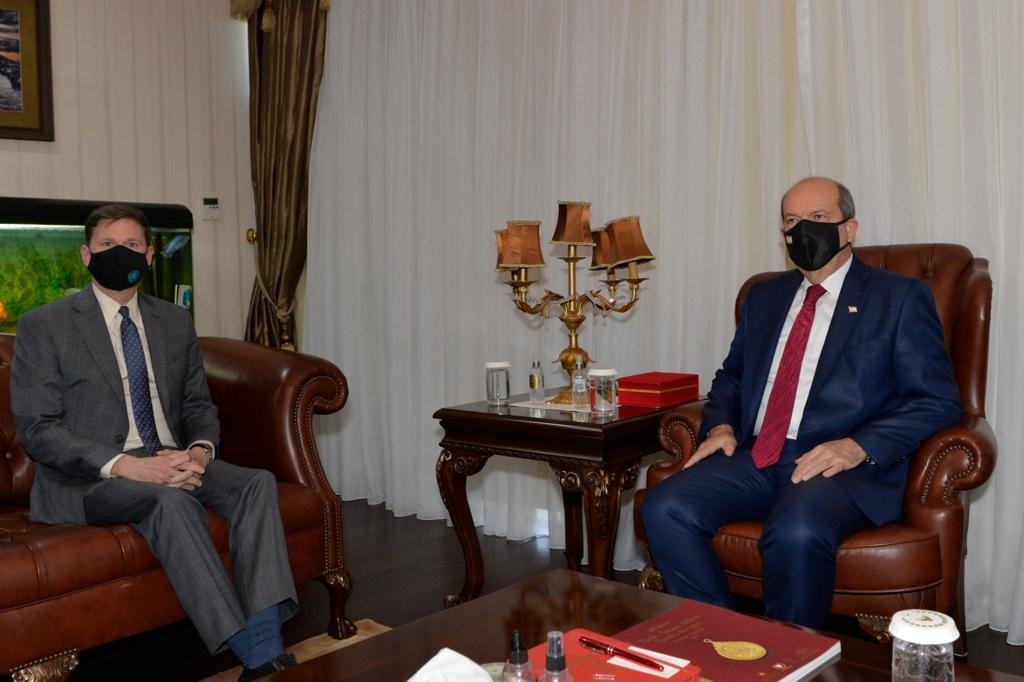 There could be an agreement on the island with the cooperation of both sides – namely Turkish Cyprus and the Greek Cypriot administration – President of the Turkish Republic of Northern Cyprus (TRNC) Ersin Tatar told the United Nations mission chief to Cyprus on Friday.

Noting that there are two separate people, states and democracies on the island, Tatar underlined the importance of sovereignty.

Stressing that he is ready to meet Stewart frequently, he said he will meet Greek leader Nicos Anastasiades on Dec. 14. upon his invitation.

The Turkish Cypriot side has never and will not avoid any meeting and contact, he said, adding that they will not start official negotiations until sovereign equality and equal international status are accepted.

Tatar told Stewart that an agreement on Cyprus must be fair, lasting, sustainable, realistic and practical.

He also reiterated that Turkish Cypriots will continue to seek their rights with the support of Turkey.

Stewart said that he had a "good meeting" with Tatar and he wants to develop a close working relationship and be a constructive partner.

Underlining that he listened to the Turkish side's perspective on the Cyprus issue during his first meeting with Tatar, Stewart said he has always respected the positions of all parties.

He avoided a question about unilateral drilling works carried out by the Greek Cypriot side in the Eastern Mediterranean.

Earlier in the day, TRNC said that the Greek Cypriot administration's unilateral steps escalated tension in the Eastern Mediterranean.

"It is not possible for us to stand idly by and watch the deliberate efforts of the Greek Cypriot side to escalate tension in the Eastern Mediterranean region and to ignore all the constructive proposals of the Turkish Republic of Northern Cyprus and Republic of Turkey regarding hydrocarbon resources in the area," said a Foreign Ministry statement.

The statement noted that the Greek Cypriot side signed an "exploration and production sharing contract" with the ExxonMobil-Qatar Petroleum consortium, in relation to the license for so-called "block 5."

"This unilateral step, disregarding all our warnings, reaffirms the Greek Cypriot administration's usurpation of the rights of the Turkish Cypriot people, as well as the denial of those of Turkey in the region," it added.

"In the face of the Greek Cypriot side's persistence to carry out such activities, we, in collaboration with Motherland Turkey, will continue to resolutely protect and preserve our rights and interests in the region," the statement said.

Cyprus has been mired in a decadeslong dispute between Turkish Cypriots and Greek Cypriots, despite a series of diplomatic efforts by the U.N. to achieve a comprehensive settlement.