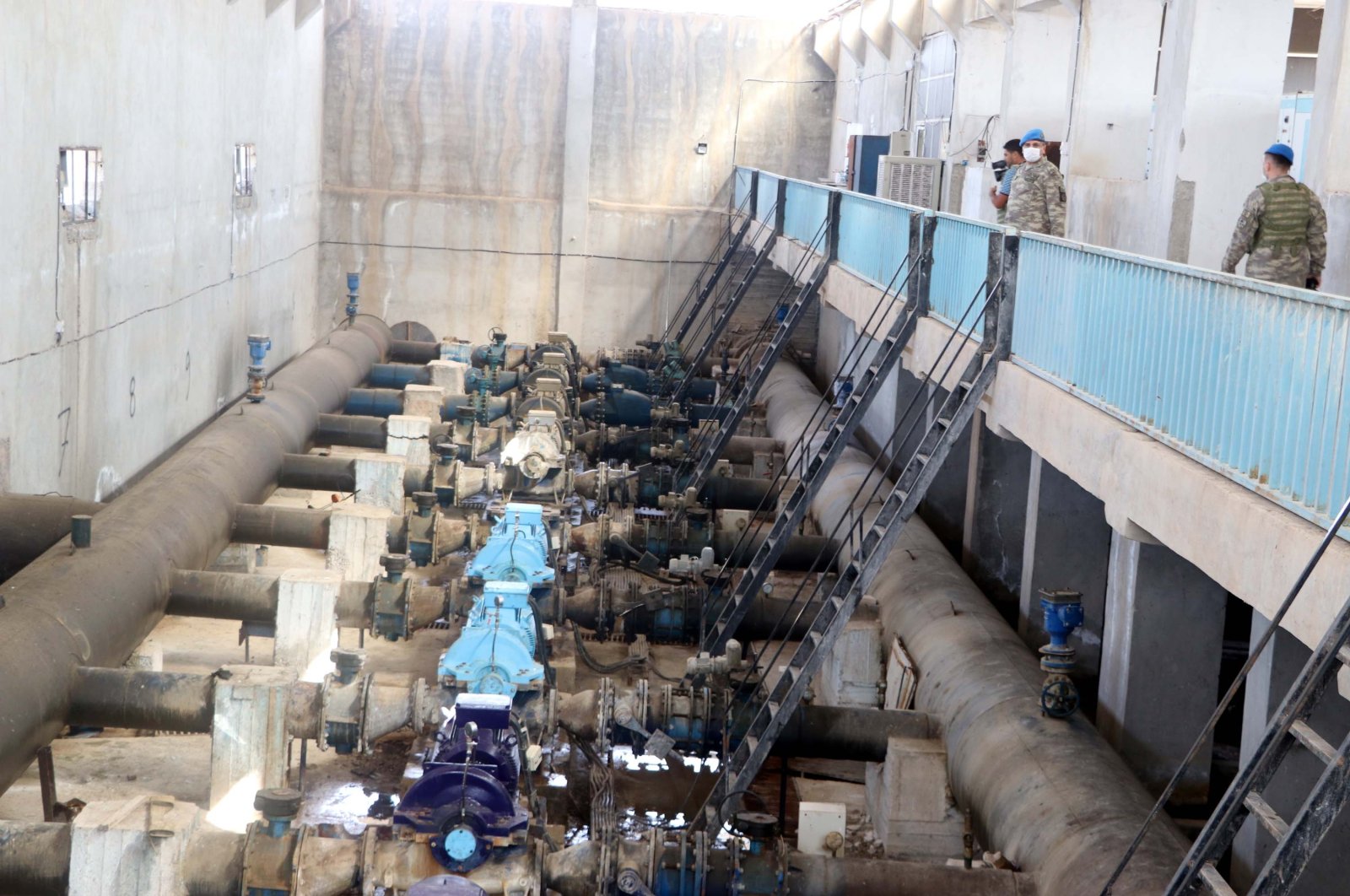 The Bashar Assad regime has intentionally reduced the voltage of electricity supplied to water plants in northern Syria, in a propaganda attempt to accuse Turkey of blocking the flow of water to regime-controlled areas.

The latest measurements taken by Syrian engineers revealed that the reason for the water outages in regime-controlled northeastern Syria is the low voltage of the electricity to the water plants, which is supplied by the regime and shows Turkey did not implement a stoppage.

The drinking water wells for Syria's northeastern Hassakeh province, which is jointly controlled by the Syrian regime and the PKK terrorist group's Syrian branch YPG, are located in the countryside of northern Syria’s Ras al-Ain, which was cleared of the YPG’s occupation by Turkey's Operation Peace Spring last year.

While 18 out of 30 wells around the Allouk water station are working actively, 12 of them do not because they are defective. The water extracted from the wells is treated in the Allouk water station and then sent to the regime's region with 12 pumps. Since three of these pumps are out of order, only nine pumps are in operation. Syrian engineers, who came to the region following talks between Turkey and Russia, have been trying to do the repair and maintenance of pumps.

The electricity used for pumping the water that goes to the regime zone comes from the Tishrin Dam, which is also under regime control. Since the regime reduces the voltage of the electricity coming to the water pump station, there is not enough water pumped for Hassakeh. In an attempt at dark propaganda, the regime claims that Turkey intentionally blocks the flow of the water.

At least 380 kilowatts of energy are required for the pumps to operate at sufficient capacity and the regime provides the highest 330-kilowatt energy to the facility. The low voltage, which is clearly evident in the indicators, reveals the regime's lies.

The engineers also confirmed that the problem is not caused by Turkey and stated that the pumps do not work because the facility is not given enough energy, but they will do the necessary work to solve the problem.

The power outage also affects the people living in the Operation Peace Spring region negatively as the regime and the YPG terrorist organization are constantly cutting the energy coming to the area. Since the damage on the lines has never been repaired, people cannot benefit sufficiently even on days with electricity. This negatively affects both the farmer who irrigates with pumps and the people living in the city.

It was stated that Russia, who said that it would repair the energy transmission line coming from the region belonging to the regime to the Operation Peace Spring region through the Red Cross, did not keep its word.

Earlier this year, YPG terrorists also spread propaganda against Turkey's Operation Peace Spring in northern Syria. The terrorists made false claims that Turkey cut the water supply of Hassakeh province to abet the spread of the coronavirus in the region in an attempt to incite hostility against Turkey, the security sources said.

They went on to say that Turkey repaired the Allouk water station in the region which was made unusable by the YPG, but it was out of service as the Assad regime did not provide enough electricity.

In its more than 40-year terror campaign against Turkey, the PKK – listed as a terrorist organization by Turkey, the United States and the European Union – has been responsible for the deaths of 40,000 people, including women and children. The YPG is the PKK’s Syrian offshoot.