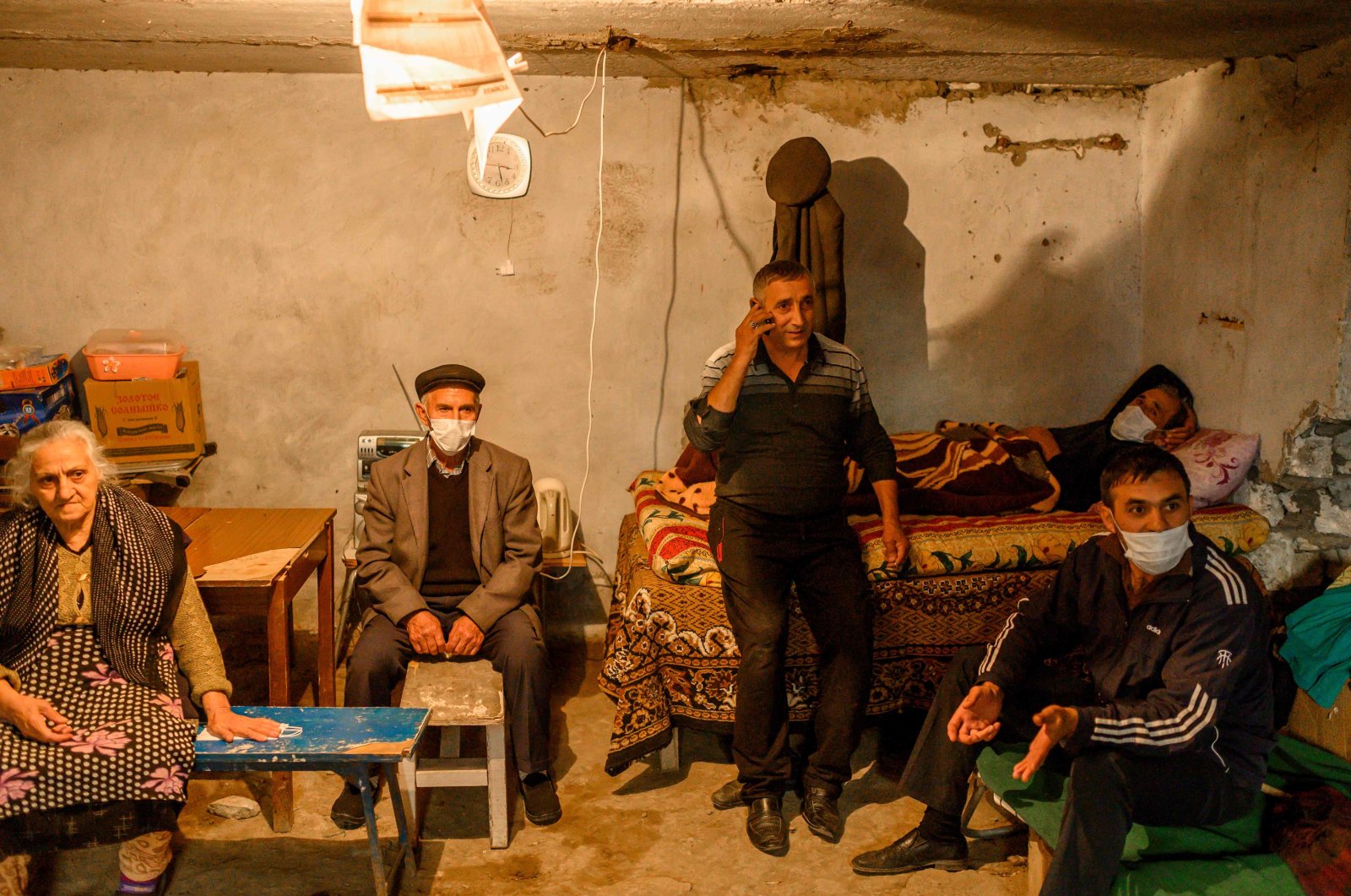 People shelter from Armenian shelling in a basement of a building in the city of Tartar, Azerbaijan, on Oct. 13, 2020, during the ongoing military conflict over Azerbaijan's illegally occupied region of Nagorno-Karabakh. (AFP Photo)
by Daily Sabah with Wires Oct 13, 2020 4:42 pm

In an attempt to maintain control of illegally occupied territories, Armenian separatists continue to violate a cease-fire in place while Azerbaijan repel assaults

Despite a recent cease-fire deal, Armenian separatists have continued attacking Azerbaijani forces and civilians as the number of victims continues to rise.

The Azerbaijani military has acted in compliance with the cease-fire and has not conducted any war maneuvers, it underlined.

In a separate statement, the ministry also stated that Armenian forces had opened fire on residential areas in Azerbaijan's Aghjabadi, Aghdam, Tartar and Goranboy provinces.

As the attacks by the Armenian separatists continue, the number of victims continues to increase.

In a statement, the office said 479 houses, 66 apartments and 241 public buildings were destroyed in the attacks carried out by Armenia from Sept. 27 to Oct. 13.

The cease-fire did not survive even for a full day, as Yerevan launched a missile attack against civilians on Azerbaijan's second-largest city, Ganja on Sunday.

Despite the decision to cease hostilities, Armenian forces launched a missile strike on Azerbaijan’s second-largest city, Ganja – despite the region being outside the frontline zone – leaving at least 10 dead and 35 others wounded, including women and children.

ICRC preparing for the exchange

Meanwhile, the International Committee of the Red Cross (ICRC) announced that it is working on an operation to facilitate the transfer of the bodies of those killed in the occupied Nagorno-Karabakh conflict, as well as the release of detainees.

"The ICRC is ready to ease handover of bodies of those killed in the Nagorno-Karabakh conflict and the release of detainees, but the sides need to agree on the format between themselves," Martin Schuepp, ICRC Eurasia regional director, told a news briefing in Geneva said.

The envoy noted that the committee was "passing proposals back and forth" but an operational and logistical arrangement would be necessary in addition to guarantees on the safety of the ICRC teams for such an operation to take place.

As Turkey and Azerbaijan enjoy the highest level of cooperation and brotherly ties in line with their broad “one nation, two states” policy championed by officials from both countries, the former continues to support the latter in every possible way while supportive statements have been voiced by both Turkish government and opposition parties.

In a phone call with European Council Chairman Charles Michel on Monday, President Recep Tayyip Erdoğan touched upon the tensions in the Caucasus and called upon the EU to have a coherent stance on Azerbaijan’s territorial integrity. He noted that the invading Armenian forces’ attacks on pipelines threaten Europe’s energy security.

"Trying to find solutions at the negotiations table without the withdrawal of the terrorist state of Armenia from Nagorno-Karabakh and ending the fighting before Azerbaijan has received its territories under illegal occupation mean legitimizing murder and oppression," Bahçeli said.

The chairperson also warned the separatist Armenian forces against any possible aggression.

"It would be wise for those who target Baku to not forget the fact that they would suddenly have to pay a price in Yerevan, for their well-being and safety," he said.

On the other hand, chairman of the main opposition Republican People’s Party (CHP), Kemal Kılıçdaroğlu said that Armenia was committing "war crimes" and "terror."

"For the sake of stopping the bloodshed, Armenia should withdraw from the Azerbaijani territories it holds under occupation. But it does not do this, and bombs the civilians instead. This is a crime against humanity, this is terror," he said.

"We are following with concern the attacks by Armenia on our civilian brothers. The international community should get to know this monstrosity, which drops bombs on civilians in Ganja hours after the cease-fire began," she said.

"Turkey should always side with Azerbaijan," Akşener added.

Some 20% of Azerbaijan’s territory has remained under illegal Armenian occupation for some three decades.

Many world powers, including Russia, France, and the U.S., have urged a new cease-fire.