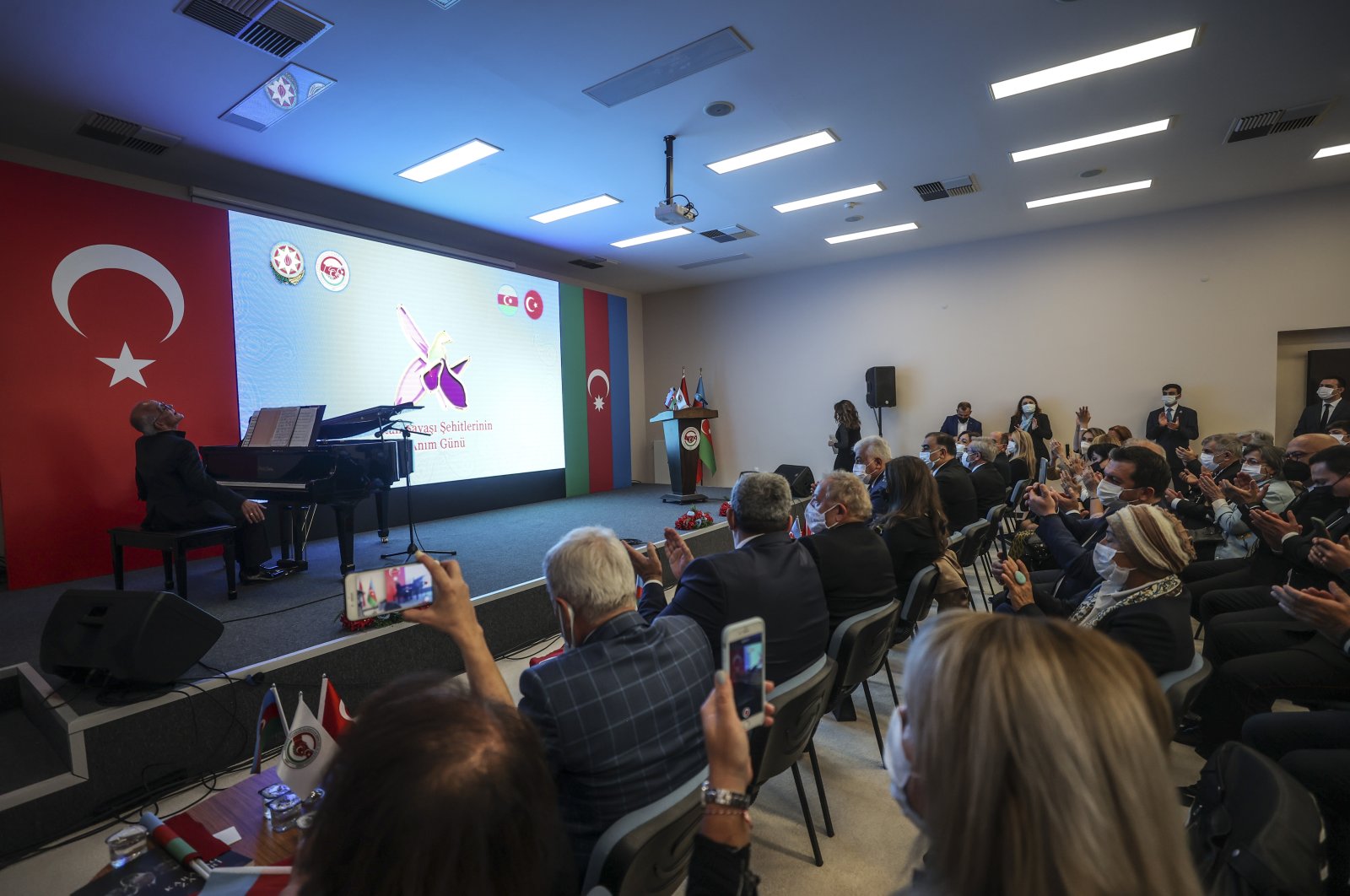 Azerbaijan's Embassy in Ankara and the Turkish-Azerbaijani Friendship Cooperation and Solidarity Foundation (TADIV) hold a commemoration ceremony for victims of the Karabakh war, in the capital Ankara, Turkey, Sept. 26, 2021. (AA Photo)
by DAILY SABAH WITH AA Sep 27, 2021 10:27 am
RECOMMENDED

Those who lost their lives during last year's Karabakh war, also known as the Patriotic War, between Azerbaijan and Armenia over the occupied Nagorno-Karabakh region were commemorated Sunday by the Azerbaijani Embassy in Turkey and the Turkish-Azerbaijani Friendship Cooperation and Solidarity Foundation (TADIV).

The latest large-scale clashes in Karabakh erupted last fall, on Sept. 27, 2020, when the Armenian army launched attacks on civilians and Azerbaijani forces and violated several humanitarian cease-fire agreements. The war showed who the true "friends and brothers" were and that they supported the just stance of Baku in the Armenia-Azerbaijan conflict, Rashad Mammadov, Azerbaijan's newly appointed ambassador in Ankara, said at the event.

During a subsequent 44-day conflict that ended under a deal signed Nov. 10, Azerbaijan liberated several cities and nearly 300 settlements and villages from Armenia’s nearly three-decade occupation. The cease-fire is seen as a victory for Azerbaijan and a defeat for Armenia, whose armed forces withdrew in line with the agreement.

The envoy underlined that the foundation of relations between Turkey and Azerbaijan date back many years, noting that these relations, which "the two nations have been protecting with their lives," will continue.

"We will ... stand by each other in tough and difficult times, strengthen our economy, army and politics, and will move forward," he added.

Aygün Attar, head of TADIV, said she remembers the martyrs with respect and gratitude. "We commemorate the heroic army of Azerbaijan, which crowned a tremendous, unprecedented 44-day war with victory, and the wonderful people who achieved immortality with martyrdom," she said.

Touching on the unity amongst Turkic speaking nations, Attar said: "Today, we are linked with each other through our language, which unites us, brings this harmony, and which constitutes the essence of unity in words, ideas and deeds."

"May the unity of Turkey and Azerbaijan last forever," she said.

Şamil Ayrım, a Turkish lawmaker who chairs the Turkey-Azerbaijan Parliamentary Friendship Group, also speaking at the event, highlighted that Turkey supported Azerbaijan during the war with its people, civil society and Parliament.

"We stood by Azerbaijan like a fist with our Parliament in Turkey," he said.

Ayrım emphasized that the "heroic soldiers" of the Azerbaijani army liberated Shusha – also known as the pearl of Karabakh – something the international community "had been delaying" for 30 years.

He noted that the Azerbaijani lands were illegally occupied by Armenian forces despite United Nations General Assembly (UNGA) resolutions. Several U.N. Security Council and UNGA resolutions, as well as many international organizations, demanded the "immediate, complete and unconditional withdrawal" of the occupying forces from occupied Azerbaijani territory since the early 1990s.

Prior to Azerbaijan's victory last year, about 20% of its territory had been under illegal occupation for nearly 30 years.

On Sept. 27 last year, Mustafa Şentop, the speaker of the Turkish Parliament, was among the first Turkish officials who reacted to the Armenian border attack on Azerbaijani settlements near the country's western frontier, vowing that Ankara will always stand by Baku.

"The recent attacks on civilians have shown that Armenia is not only a threat to Azerbaijan but an established terror state in terms of regional peace," Şentop said at the time on Twitter, adding that Armenia will solely be responsible for its consequences.

Azerbaijani Foreign Minister Jeyhun Bayramov also stated Monday that Azerbaijan ended the occupation in Karabakh as a result of 44 days of struggle, and added: "Azerbaijan's people, army and unity of the chief commander on the battlefield for 44 days showed that relying on the status quo in the occupation of Azerbaijani lands has no chance of success."