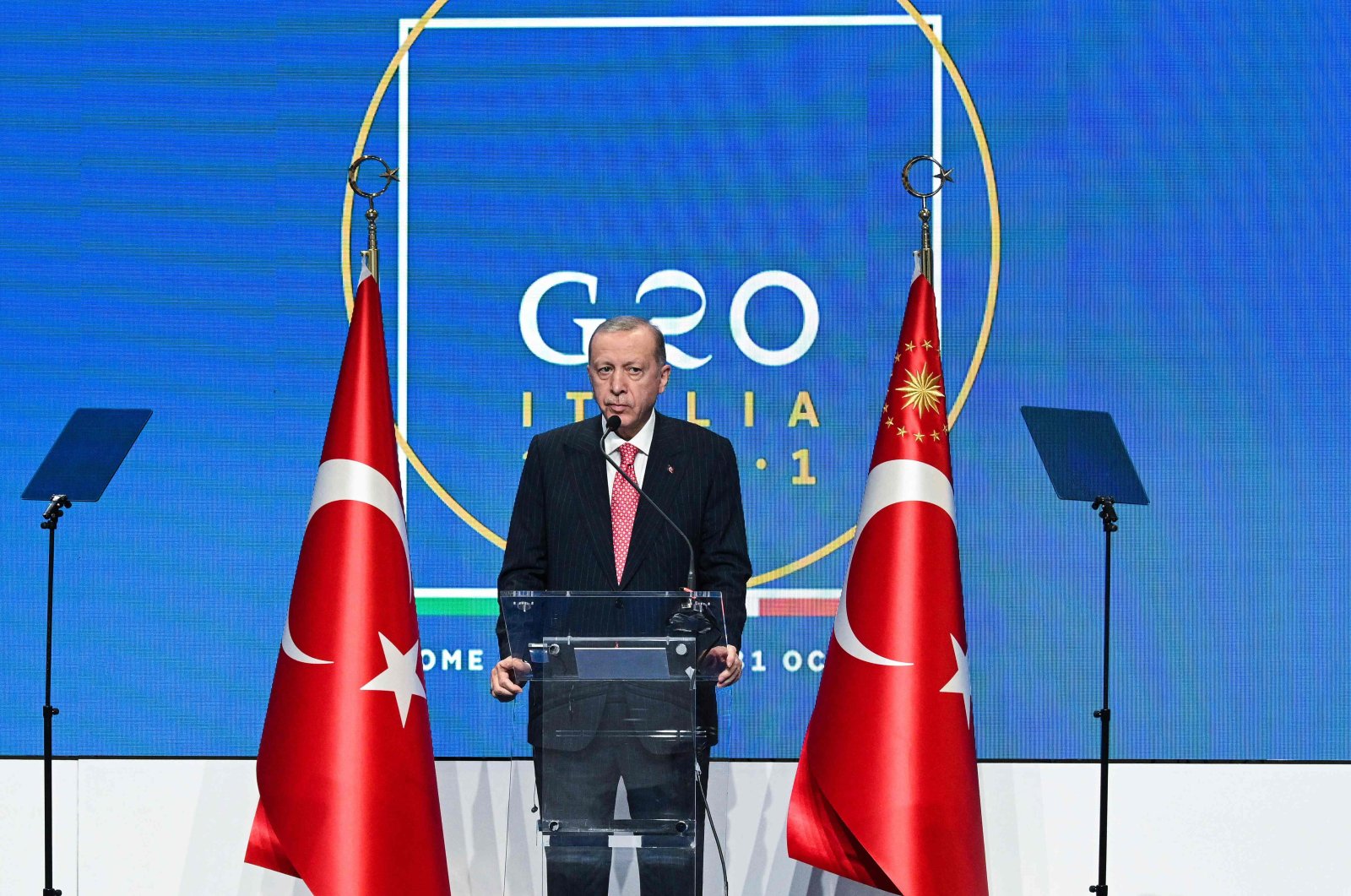 Ahead of the press conference, Biden and Erdoğan held a meeting on the sidelines of the summit. Responding to a reporter's question regarding Turkey's purchase of F-16s before the two leaders began their meeting, Biden said they were planning to have a "good conversation."

The United States is discussing ways for Turkey to buy F-16 fighters after a deal for more advanced F-35s was scrapped due to Ankara’s purchase of a Russian missile system, officials said recently.

Erdoğan said on Oct. 17 that Ankara wants to buy the cheaper F-16s using the $1.4 billion (TL 13.45 billion) it allotted for the F-35 fighter jet program. Erdoğan has said Washington offered Ankara a package of F-16 jets and modernization kits in exchange for the payment.

Releasing a statement after the 70-minute meeting, Turkey's Presidential Communications Directorate said the exchange took place in a positive atmosphere and that bilateral relations and regional issues were discussed.

Asked about whether he could “confirm” Biden’s remark on East Mediterranean, Erdoğan said that it was not discussed as the topic was not on Biden’s agenda or his.

Tensions are once again on the rise between Turkey and the Greek and Greek Cypriot administrations over maritime borders and drilling rights in the Eastern Mediterranean after several months of relative calm.

Greece has frequently been embroiled in tensions with Turkey over a range of issues, from competing claims over hydrocarbon resources in the Aegean Sea to the demilitarization of islands. Greece's burgeoning arms program is designed to counter Turkish challenges in the Eastern Mediterranean, against which France is among the few European Union states to have offered public support in past months.

Turkey, which has the longest continental coastline in the Eastern Mediterranean, has rejected maritime boundary claims made by EU members Greece and the Greek Cypriot administration, stressing that these excessive claims violate the sovereign rights of both Turkey and the Turkish Republic of Northern Cyprus. Both sides cite a range of decades-old treaties and international agreements to support their conflicting territorial claims.

During Erdoğan's presser, he touched upon the after-effects of the COVID-19 pandemic on the world economy, saying that although it had started recovering in 2021, "our economies are still facing serious challenges."

He also touched upon the continued support of the U.S. for terrorist organizations in Syria, namely the YPG, an affiliate of the PKK, saying that he has expressed Turkey's reservations regarding the matter.

"I also told him (Biden) these issues were steps that could damage our solidarity. I believe the process that has been continuing until now will not continue like this from now on," he said.

The PKK is recognized as a terrorist organization by the United States, Turkey and the European Union, and Washington's support for its Syrian affiliate has been a major strain on bilateral relations with Ankara. The U.S. primarily partnered with the YPG in northeastern Syria in its fight against the Daesh terrorist group, but Turkey has strongly opposed the YPG's presence in northern Syria.

Regarding climate change, one of the main subjects of the G-20 summit in Italy, he said: "It is shameful that the biggest contributors of environmental degradation spend two times more to keep migrants out than they spend on fighting climate change."

The president also said that Turkey is not considering enduring another wave of migration from Afghanistan after the Taliban takeover in August.

"We (Turkey) are one of the countries that feel the burden of migration originating from Afghanistan the most. We (Turkey) know very well both the human security dimension of the migration crisis and what it means to be left alone in the fight against migration," he added.

The president also said Turkey seeks to be the chairperson of a working group it suggested be established on Afghanistan under the G-20 auspice.