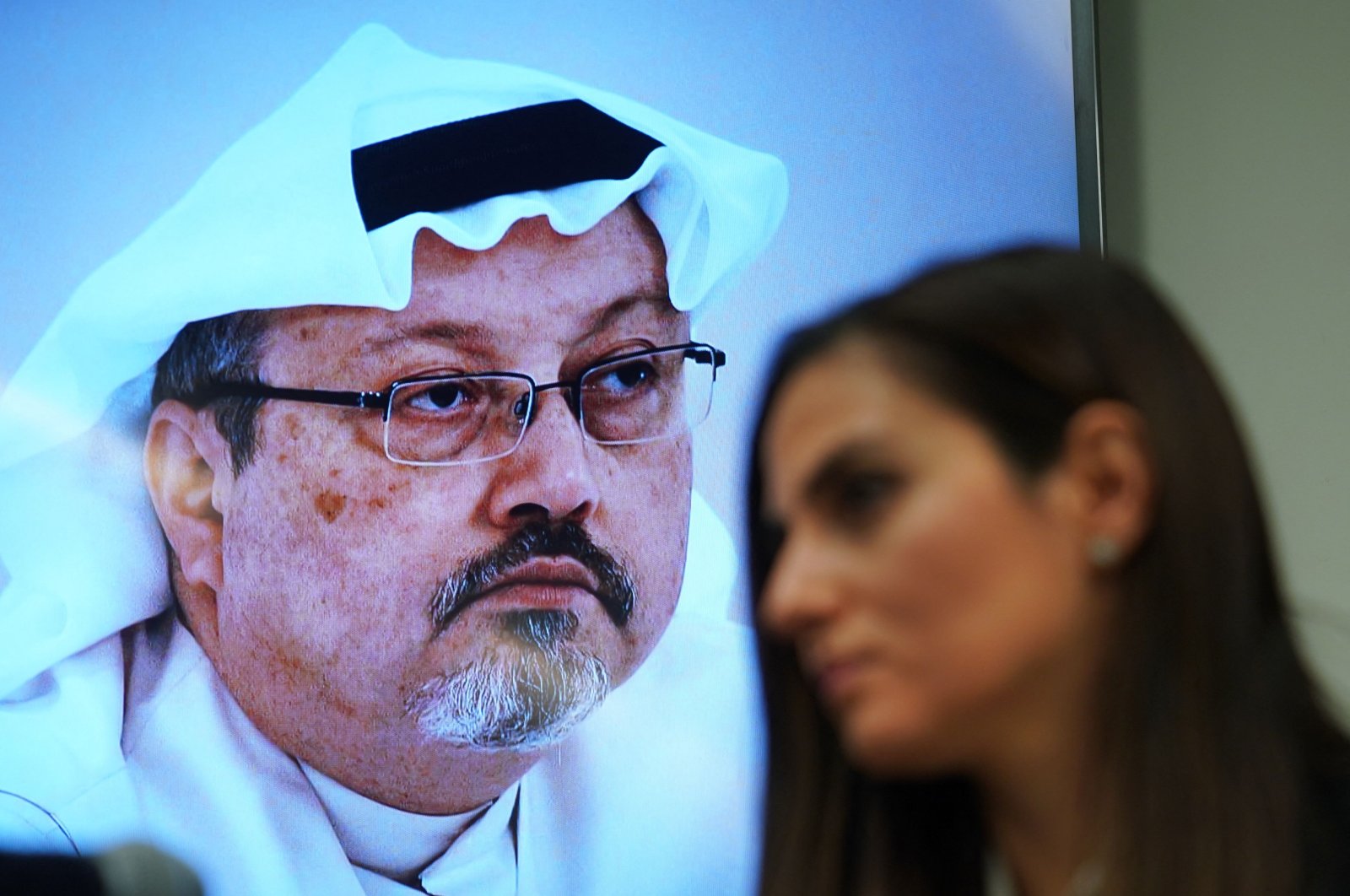 Sherine Tadros, head of New York (UN) Office of Amnesty International, speaks during a news conference at the United Nations next to a photo of Jamal Khashoggi, Oct. 18, 2018. (AFP Photo)
by Agencies Feb 26, 2021 8:24 am
RECOMMENDED

The long-waited report includes intelligence from the CIA and other intelligence agencies, according to the source, who spoke on condition of anonymity.

Biden kept the king waiting in his long list of calls to U.S. allies after being sworn in five weeks ago.

Meanwhile, when he did finally reach out to the Saudis, it was pointedly to the king and not the expected successor Crown Prince Mohammed bin Salman, commonly known as MBS.

The telephone diplomacy was all part of what the White House is calling a reset in relations in the wake of Khashoggi's horrific 2018 murder inside the Saudi consulate in Istanbul, Turkey.

A U.S. intelligence report on the incident, in which Khashoggi is believed to have been killed and then chopped into pieces, is being made public "soon," the White House said. However, the White House readout about the call made no mention of the killing or the report.

The report is expected to state that the crown prince in some capacity was connected to the killing, which involved a fpla positioned at the consulate before Khashoggi visited.

The kingdom’s state-run Saudi Press Agency similarly did not mention Khashoggi’s killing in a report about the call between Biden and King Salman, instead, focusing on regional issues such as Iran and the ongoing war in Yemen.

The king and Biden stressed “the depth of the relationship between the two countries and the importance of strengthening the partnership between them to serve their interests and achieve security and stability in the region and the world,” the report said.

The prince's critics, including a rights group founded by the slain journalist, want him to make good on that pledge with sanctions or other tough actions targeting and isolating the prince. They fear Biden will go with condemnation instead, eschewing a lasting standoff with the likely future ruler of an important, but often difficult, U.S. strategic ally, valued both for its oil reserves and its status as a counterbalance to Iran in the Middle East.

The killing drew bipartisan outrage. Republican Sen. John Cornyn of Texas said Thursday that he hopes Biden talks to the king ”very straight about it, and very emphatically, and says that this is not acceptable.” Democratic Sen. Tim Kaine of Virginia said he understood the administration to be considering new sanctions to accompany the release of the report. “So it’s a day of reckoning, but one that’s long overdue.”

The report's findings and Biden's resulting next steps, at a minimum will set the administration's tone for dealing with the ambitious 35-year-old prince.

Critics blame Mohammed bin Salman for the kingdom's imprisonment and alleged torture of peaceful rights advocates, businesspeople and other royals at home and for launching a devastating war in neighboring Yemen and a failed economic blockade against neighboring Qatar, among other actions.

Mohammed bin Salman has consolidated power rapidly since his father, Salman bin Abdulaziz al Saud, in his 80s, became king in 2015. Salman is one of the last living sons of modern Saudi Arabia’s original founder.

Given his age and Saudi royals' longevity, the prince could rule for the next half-century, if he follows his aging father to the throne.

"This was in the span of two or three years — just imagine what will happen in the next 40 years if they allow him to rule,” Abdullah al Oudh, a Saudi man who has received asylum in the United States after Saudi Arabia imprisoned al Oudh’s father in 2017 over a tweet urging Saudi reconciliation with Qatar, said Thursday.

“This guy ... sees the world as a stage for his botched operations," said Oudh, a Gulf research director for Democracy for the Arab World Now, a rights group Khashoggi founded shortly before his murder.

The Saudi Arabia Embassy spokesman in Washington did not immediately respond to a request for comment Thursday. Saudi officials have said Khashoggi's killing was the work of rogue Saudi security and intelligence officials.

The prince said in 2019 he took “full responsibility” for the killing since it happened on his watch, but denied ordering it.

U.S. intelligence findings are coming out more than two years after Khashoggi walked hand-in-hand with his fiancee to the Saudi consulate in Turkey. He planned to pick up documents for their wedding.

The errand was recorded by surveillance cameras that tracked his route and those of his alleged killers in Istanbul in the hours leading up to his killing.

Inside the consulate, Khashoggi died at the hands of more than a dozen Saudi security and intelligence officials and others who had assembled ahead of his arrival.

A Turkish bug planted at the embassy reportedly captured the sound of a forensic saw, operated by a Saudi military colonel who was also a forensics expert, dismembering Khashoggi’s body within an hour of his entering the building. The whereabouts of his remains remain unknown.

Much of the damage from the killing of Khashoggi, a gregarious and well-regarded Saudi journalist with influential supporters in the United States and around the world, has already been absorbed by the U.S.-Saudi relationship.

Once in office, Biden said he would maintain whatever scale of relations with Saudi Arabia that U.S. interests required. He also ordered an end to U.S. support for the Saudi-led bombing campaign in Yemen and said he would stop the sale of offensive weapons to Saudi Arabia. He's given few details of what weapons and support he meant.

Asked how the release of the findings would affect Biden's approach toward Saudi Arabia, White House press secretary Jen Psaki said Thursday that a range of options was on the table.

Congress in 2019 demanded the release of the report's findings, but the Trump administration refused. The Biden administration agreed to release a declassified version.

Saudi Arabian courts last year announced they had sentenced eight Saudi nationals to prison in Khashoggi's killing. They were not identified.