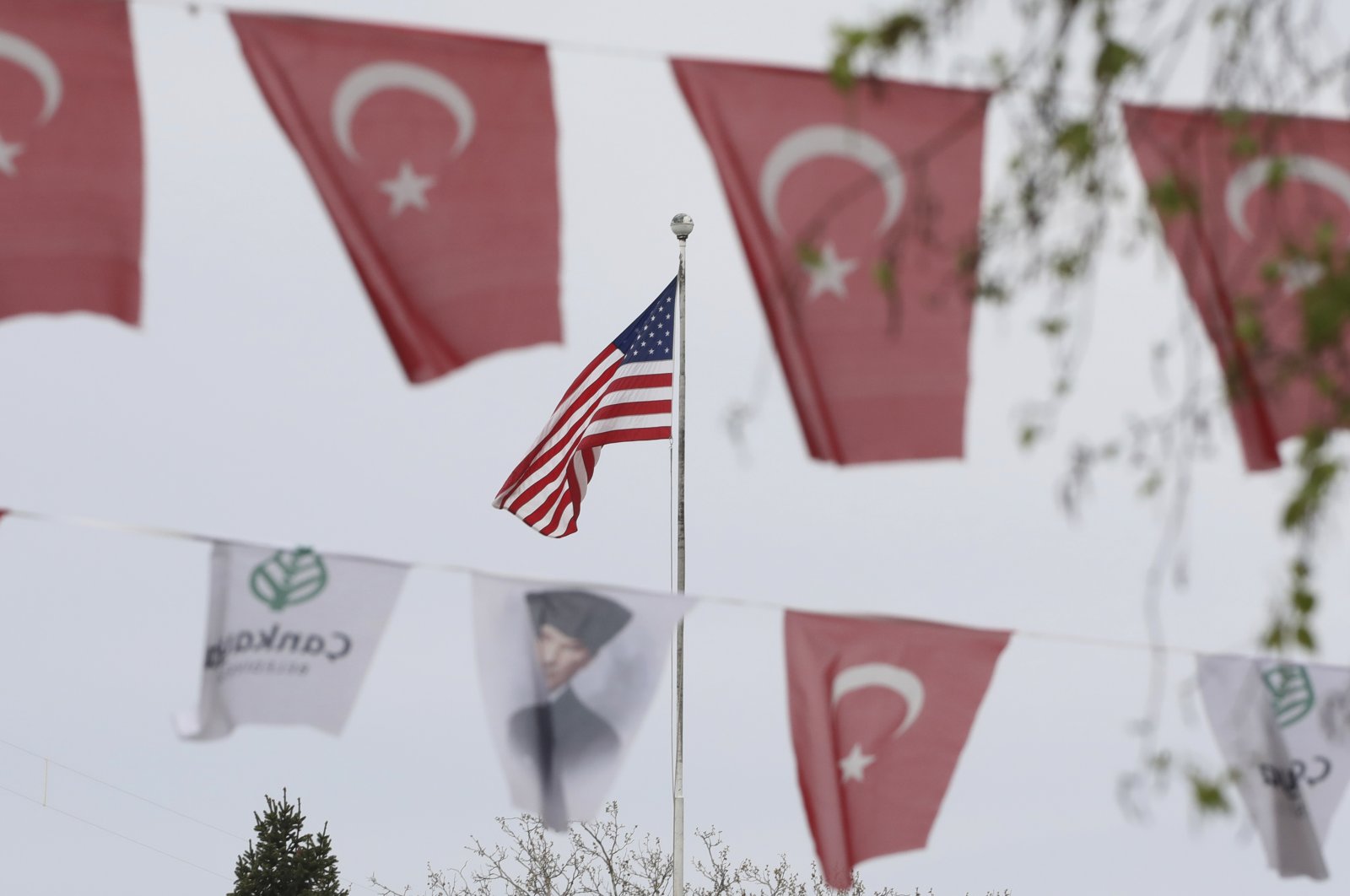 Biden's genocide claims on the 1915 events are 'baseless' Defense Minister Hulusi Akar says, while the Justice Ministry has dismissed the move legally by pointing out that there are no judicial bodies that can confirm such accusations

Reactions to U.S. President Joe Biden's recent controversial move on the 1915 events, during which he labeled the case as a "genocide," continue as Turkish politicians underline that such historical incidents should not be politicized and academics point at the incompatibility of such claims with the historical facts.

Defense Minister Hulusi Akar stated on Monday that the description of the events of 1915 as "genocide" means nothing but denial and distortion of historical facts.

Akar released a written statement on the ministry's website regarding Biden's description of the events.

The defense minister stated that those who use this expression should look at the world and their own history.

"There is no repetition of an incident that did not happen, and the justification of the U.S. administration is invalid. When there was no usage of such rhetoric before 2020, what has changed now that led to such a decision to be taken? What do the prudent American people think about this? This decision is also noteworthy as far as intellectual honor is concerned. It must be known that history cannot be rewritten through such political statements," he said.

The minister stressed that historical events should not be politicized and used as a tool of conflict since such an atmosphere has a negative impact on regional peace, especially when it comes to Turkey-Armenia relations.

"The peace of our region is the common problem of Turkey and Armenia, not the countries who try to use the Armenian diaspora for their own interests," he further underlined.

Akar also reiterated that Turkey has always said the 1915 events are not a topic that should be discussed among politicians but instead among historians.

"Despite this, the U.S. administration, with this decision, denied signing its own official reports, bowing to the pressure from the Armenian diaspora and some other centers, ignoring existing information and documents, especially the General Harbord Report 12 in the U.S. National Archives and Records Agency (NARA)," he added.

On Saturday, Biden called the events of 1915 a "genocide," breaking with American presidents' long-held tradition of refraining from using the term.

Another reaction came from Presidential Spokesperson Ibrahim Kalın on Sunday as he said Turkey will respond over the coming months to the remarks made by the U.S. president on the events of 1915.

"There will be a reaction of different forms and kinds and degrees in the coming days and months," Kalın told Reuters.

"Everything that we conduct with the U.S. will be overshadowed by this very unfortunate statement," he said.

Underlining that Turkey's Parliament is expected to make a statement Monday, he said the U.S. declaration would not provide any legal basis for potential reparation claims.

"To reduce all that to one word and try to implicate that Turks were involved, our Ottoman ancestors were involved in genocidal acts, is simply outrageous," he added.

Turkey says the events of 1915 were triggered by Armenians in eastern Anatolia siding with the invading Russians and revolting against the Ottoman forces. The subsequent relocation of the Armenians resulted in numerous casualties.

Turkey objects to the presentation of these incidents as "genocide,” describing them as a tragedy in which both sides suffered losses.

"As the speaker of the Turkish parliament, I reject this great slander [of Biden] against our state, nation and history. I want to remind the officials of the countries, especially those with a criminal record of crimes against humanity, racism and genocide in their history, to be very careful when talking about Turkey," Şentop told in an event in the capital Ankara.

On the 1915 events, there is no new scientific and historic finding or new evaluation, Şentop noted.

"The only thing that changes in the political decision [of the U.S. on the 1915 events]," he said.

"The U.S. president's so-called 'genocide' statement is a statement that disregards the judicial, political and historical backgrounds. As it revealed the US contradictions of science and international law, the statement can also damage the relations between Turkey and the US based on human rights, the superiority of law and mutual friendship," he added.

While politicians react to the incident, academics underline the historical facts and how the U.S.' move does not comply with them.

Trakya University History Department faculty member Bülent Yıldırım stated that 1.29 million Armenians lived in the Ottoman Empire, according to the census, and said that the claim that "1.5 million Armenians were killed" is incompatible with historical facts.

Yıldırım reacted to Biden's description of the 1915 events as "genocide" in an online panel.

Expressing that the Armenian claims regarding the events of 1915 did not reflect the truth, Yıldırım emphasized that the claims of the Armenian and Western states were proven false by archived documents.

Pointing out that the allegations are completely political and not compatible with historical facts, Yıldırım said: "The Armenian population living in the Ottoman Empire was around 1.29 million, according to the last censuses. Most of them were not subject to displacement. The population to be transferred was around 900,000, the population that was subjected to displacement was around 500,000. How could 1.5 million Armenians have died?"

Yıldırım stated that April 24, 1915, was the date when the Ottoman Empire issued detention and arrest warrants for the Armenian committees cooperating with the Entente states in order to protect the internal security.

Reiterating that the Dispatch and Settlement Law was implemented later, Yıldırım said: "On April 24, 1915, the Armenian committees, who had been warned many times before, were detained because they did not heed these warnings and continued to cooperate with the Entente forces. Only 235 Armenians were arrested. The reason why such an action was taken by Ottoman Empire was the fact that Van was captured by the Armenians and Russians, who killed 20,000 Muslims there."

"Nobody claims that no incident took place during the displacement. Here, Armenian revolutionaries also carried out many massacres. There were also reactions to the Muslim people and against them, so there is a comparative situation," he said.

Meanwhile, Turkey's Justice Ministry also conducted some fact-checking on the issue, approaching it from a legal perspective. Preparing a list of frequently asked questions regarding the 1915 events, the ministry pointed out that it is legally not possible to claim that the events qualify as "genocide."

"Genocide is evaluated within the scope of various disciplines such as politics, sociology and history. However, in order for an act to legally constitute genocide, either the jurisdiction of the country where the alleged acts took place or an international judicial mechanism (the International Criminal Courts or International Court of Justice) with jurisdiction must decide on this issue (U.N. Convention Article 6). In addition, the survival of the accused is one of the conditions for prosecution," the ministry said.

Responding to the question: "is there an authorized court decision describing the events of 1915 as genocide," the ministry answered:

"There is no judicial decision on this matter. It is not possible, fundamentally and procedurally, either. It is out of the question for a judicial mechanism to take action against the framework laid down in the U.N. convention and the decisions of the International Court of Justice."

It also expressed that the European Court of Human Rights (ECtHR) cannot judge the events of 1915.

"In the Perinçek v. Switzerland and Mercan and others v. Switzerland judgments, the ECtHR stated that, contrary to the International Criminal Court or the International Court of Justice, in the context of the Genocide Convention, it did not have the authority to make binding decisions regarding the events experienced by the Armenians during the Ottoman Empire in 1915 and whether the deportation could be qualified as 'genocide' under international law. Therefore, any claim arising from the events of 1915 cannot be put forward before the ECtHR," it said.

On the question of whether or not it is punishable to not recognize the events of 1915 as genocide, the ministry said:

"This issue has been brought to the ECtHR with the cases mentioned above. In these cases, the Swiss law, which made it a crime to deny the Armenian genocide allegations, received a breach decision from the ECtHR. The issue has been evaluated within the scope of freedom of expression. In the decision, it was emphasized that binding the statements of opinion on historical events to criminal sanctions would not be compatible with the obligation to protect freedom of expression stipulated by the European Convention on Human Rights."

"Considering the Genocide Convention, to which Turkey is also a party, and the ICJ jurisprudence interpreting this agreement, the U.S. president's statements do not have a legal equivalent. States, as well as individuals, have the right not to be tainted," the ministry concluded.