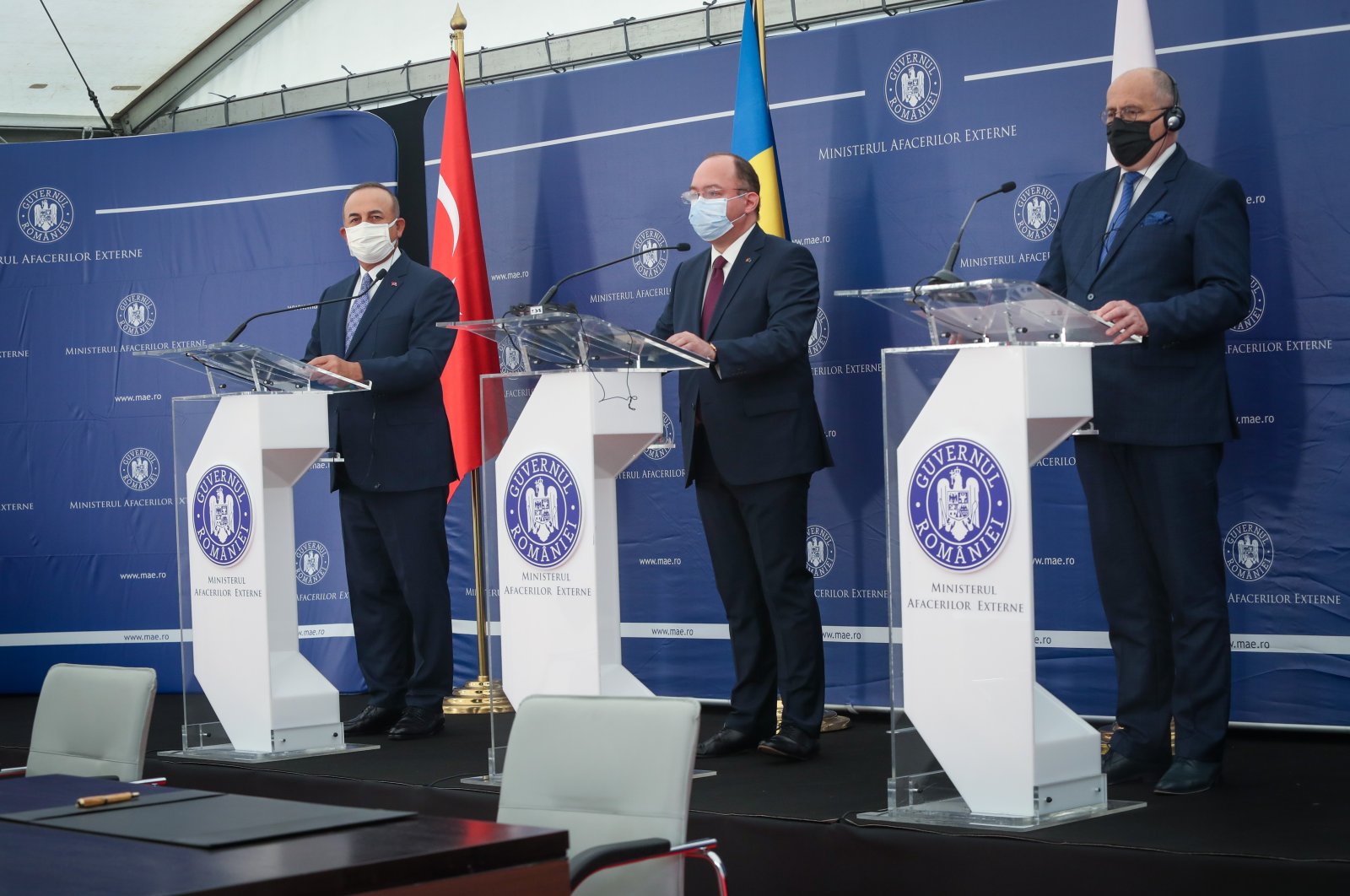 The Black Sea region must be kept free of tension, Foreign Minister Mevlüt Çavuşoğlu stated Friday in a meeting with his Romanian and Polish counterparts to discuss the preparations for a NATO summit and security developments in the region, saying that recent tensions between Ukraine and Russia have been met with concern.

In a joint press conference with Polish Foreign Minister Zbigniew Rau and Romanian Foreign Minister Bogdan Aurescu in Bucharest, Çavuşoğlu said: “We are all concerned by the latest developments in Ukraine and the surrounding areas. Still, we have received encouraging news recently, we hope that dialogue and diplomacy will prevail.”

The three top diplomats discussed new projects as well as the recent NATO foreign ministers’ meeting and the upcoming NATO summit to be held in June.

“During the trilateral format debates, we exchanged views on the security situation on NATO's Eastern Flank and discussed the worrying military activities in the Eastern Neighborhood, including recent ones in and around Ukraine. We reiterated our call for the full implementation of the Minsk Agreements and for strict compliance with the cease-fire regime,” the joint statement of the ministers said.

The foreign ministers of Ukraine and Georgia were also invited to Bucharest for an informal exchange of views.

Turkey, Romania and Poland reaffirmed support for the independence, sovereignty and territorial integrity of Georgia and Ukraine within their internationally recognized borders and for the Euro-Atlantic aspirations of both states.

Russia announced Thursday it was ordering troops back to base from the area near the border with Ukraine, apparently calling an end to a buildup of tens of thousands of soldiers that had alarmed the West.

Yet, Ukraine's foreign minister, Dmytro Kuleba, said that withdrawal of Russian military forces from the border with Ukraine could ease tensions but the step alone would not stop the escalation nor the conflict in the eastern Donbass region.

In a statement, Kuleba also urged Ukraine's Western partners to continue to monitor the situation closely and to take effective measures to deter Russia.

Kyiv has been battling pro-Russian separatists in the eastern Donetsk and Lugansk regions since 2014, following Moscow's annexation of the Crimean peninsula – a move that plunged Russia's ties with the West to new lows and led to economic penalties.

The conflict, which has claimed more than 13,000 lives, has seen 30 Ukrainian soldiers killed since the start of the year, compared to 50 in all of 2020. The escalation along the front line, as well as sharp rhetoric, has spurred fresh rounds of talks.