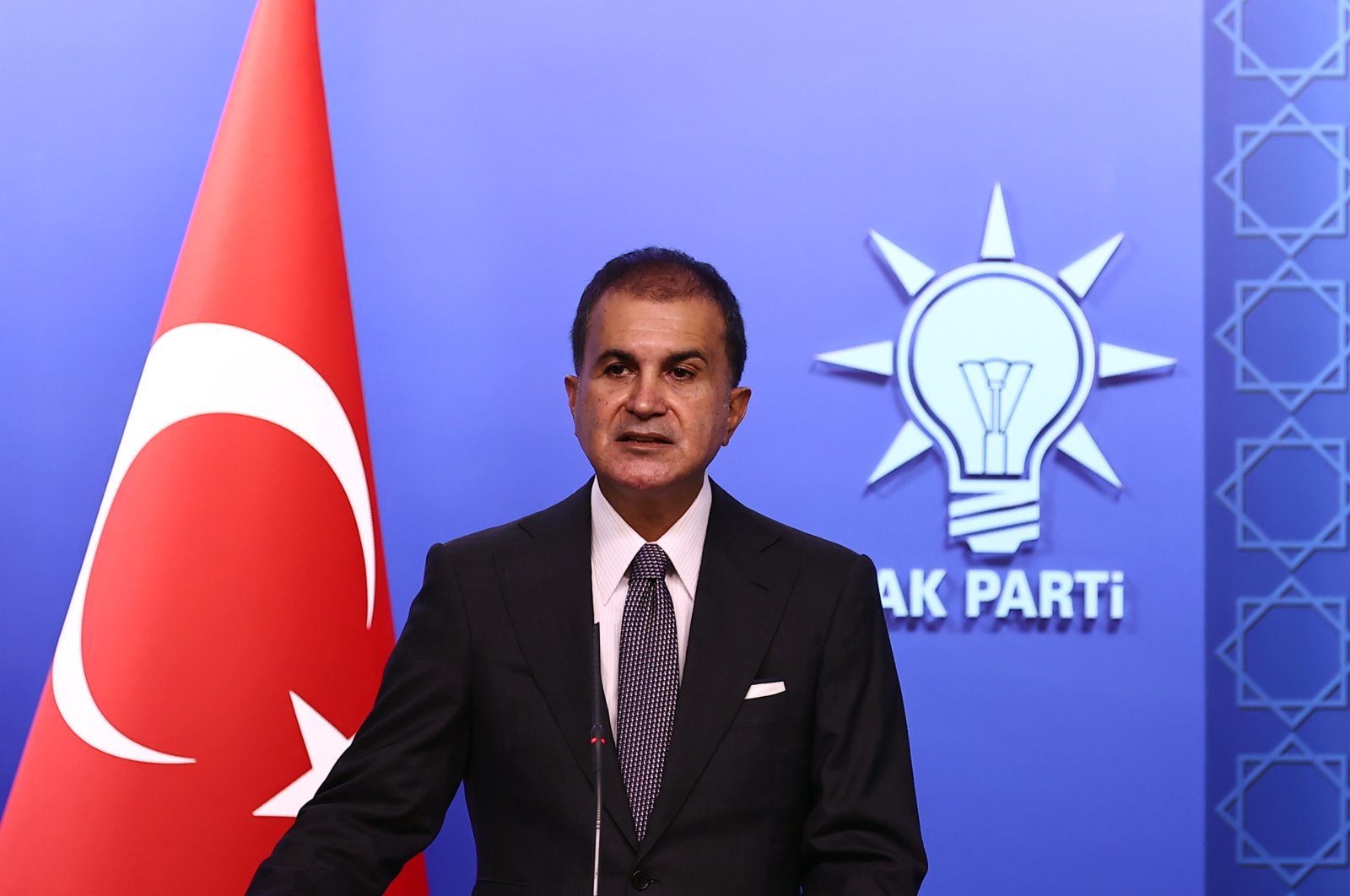 The Blue Homeland doctrine is Turkey's red line as the sea is an inseparable part of the homeland, the ruling Justice and Development Party (AK Party) spokesperson Ömer Çelik said Tuesday.

In a news conference following the AK Party's Central Executive Board (MYK) in the capital Ankara, Çelik noted that Greece's maximalist ideals in the Eastern Mediterranean and the Aegean seas have no future.

"A policy (whereby a country) thinks the Aegean is its own lake and ignores the existence of a state like the Turkish Republic of Northern Cyprus (TRNC) has nowhere to go," Çelik said.

Stating that Greece and the Greek Cypriots should abandon their maximalist behavior in the Aegean and Eastern Mediterranean, Çelik said Turkey swiftly responds to violations in the area, as it has recently done.

Disputes between Turkey and Greece over maritime borders in the Eastern Mediterranean have led to the exchange of barbs, while some European countries – including France – have become involved on the part of Athens.

Ankara has clearly indicated that it will not abandon its rights in the region in the face of Greece's maximalist claim that Athens had "full authority" in determining the maritime borders of the Greek islands, most of which are closer to the Turkish coast than to the Greek mainland.

The Eastern Mediterranean basin is estimated to contain natural gas worth $700 billion (TL 5 trillion), according to the United States Geological Survey (USGS).

The Blue Homeland doctrine, conceived by former Turkish naval officers Cihat Yaycı and Cem Gürdeniz, encompasses Turkey's maritime jurisdictions in the Black, Mediterranean and Aegean Seas, as well as the country's exclusive economic zone and continental shelf in line with United Nations resolutions. It emphasizes the idea that Turkey should pay more attention to the maritime sphere, focus on marine delimitation agreements, tap into potential resources as a heavily energy-dependent country and be aware of its interests, in line with long-running Turkish foreign policy principles.

Green development has been embraced by the government, Çelik said, as he noted that President Recep Tayyip Erdoğan has shown in his U.N. General Assembly speech that the country embraced the vision of the Green Development Revolution.

Turkey plans to ratify the Paris Climate Agreement and the Turkish Parliament will debate it Wednesday.

In this context, Çelik said the production of renewable energy sources and low-emission and clean production techniques will be encouraged.

He added that it is important to increase the share of railway and seaway transportation for freight and passengers and that increasing the rate of electric and hybrid vehicle use will also be on the agenda.

Noting that Turkey will also focus on issues such as generalizing zero-energy building standards, measures regarding the reduction of food waste in agriculture and the protection of forests and water resources, Çelik said the use of recycled materials in all areas will be encouraged.

"Tensions that may arise in Idlib, where around 4 million people live in extremely difficult conditions, will produce new waves of migration and humanitarian tragedies," he said.

Noting that the meeting between Turkey's president and his Russian counterpart in Sochi on Sept. 29 is important in this regard, Çelik said: "From our point of view, it is essential to establish a political solution in order to achieve lasting peace in Syria. In this respect, we closely follow and evaluate the progress of the work of the (Syrian) Constitutional Committee."

On the recent remarks by French President Emmanuel Macron regarding Algeria, Çelik said Macron's statements should not be taken seriously.

"The Algerian people and state are an honorable people and state. Therefore, it is an extremely wrong approach to connect Algeria's statehood and nationalization process to French colonialism," he said.

"To tell the truth, I would like to express that we cannot understand in any way this policy of targeting our president, Recep Tayyip Erdoğan, and the history of Turkey and the Ottoman Empire in order to avoid facing its (France's) own colonial legacy."

On Thursday, Macron met at the Elysee Palace with the descendants of Algerians who fought on France's side during Algeria's war of independence.

"The building of Algeria as a nation is a phenomenon worth watching. Was there an Algerian nation before French colonization? That is the question," the Le Monde daily quoted him as saying.

Macron's remarks, however, sparked a storm of condemnations in Algeria.

Algeria Saturday issued a statement that condemned the remarks by Macron on France's colonial past.

Macron claimed that “there was a colonization before the French colonization” of Algeria, alluding to the Ottoman presence in the country between 1514 and 1830.