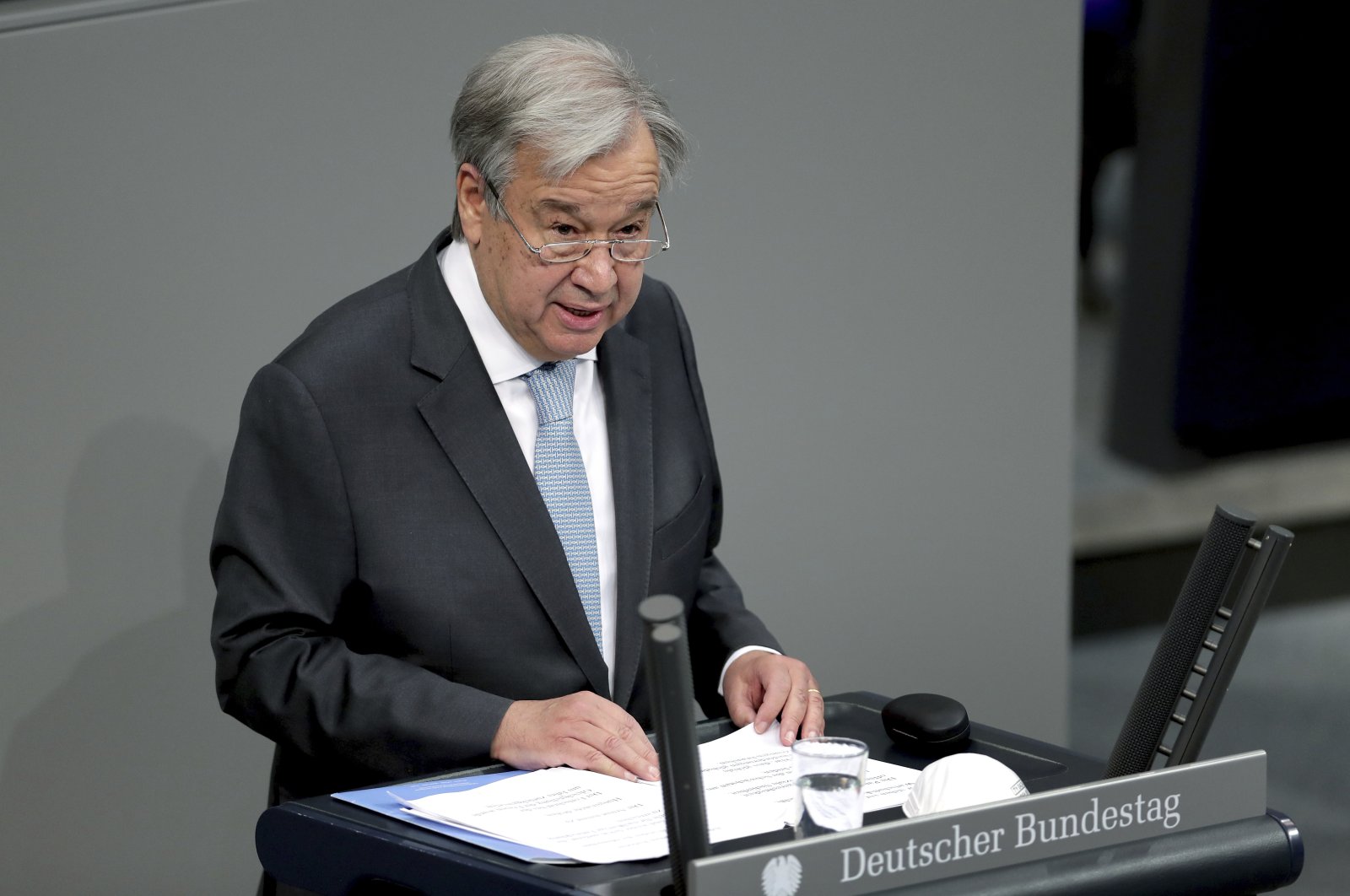 U.N. Secretary-General Antonio Guterres delivers a speech during a meeting of the German federal parliament, Bundestag, at the Reichstag building in Berlin, Germany, Dec. 18, 2020. (AP Photo)
by Daily Sabah with AP Jan 20, 2021 10:41 am
RECOMMENDED

U.N. Secretary-General Antonio Guterres says he intends to invite the rival leaders on Cyprus to an informal meeting “as soon as practicable” but warns that this meeting must be different and help clarify “the true extent” of their common vision “and outline steps necessary to chart a way forward.”

The U.N. chief also warned in a report to the U.N. Security Council (UNSC) circulated Tuesday that “time is working against a mutually acceptable political settlement in Cyprus.”

After decades of status quo, he said, “changes are happening on the ground that may become irreversible, should the two communities not recommit themselves to resolving their differences peacefully, proactively and with determination.”

Guterres gave no date for the meeting of Cyprus’ rival Greek and Turkish Cypriot leaders along with the three “guarantors” of the Mediterranean island nation’s independence – Greece, Turkey and Britain. U.N. spokesperson Stephane Dujarric told reporters Tuesday that “there’s no date I’m able to share with you.”

The UNSC on Tuesday was briefed virtually behind closed doors on the latest developments by U.N. special representative Elizabeth Spehar, who heads the U.N. peacekeeping mission in Cyprus.

Council diplomats, speaking on condition of anonymity because the briefing and discussions were private, said there was broad support among the 15 members for Guterres’ intention to convene a U.N. meeting at the earliest opportunity. Members also welcomed the positive response of the rival leaders who signaled their agreement to take part with no preconditions, the diplomats said.

Numerous rounds of U.N. mediated talks have ended in failure, with the last push for a peace deal in July 2017 ending in acrimony. That meeting also led to an apparent shift by Turkey and the Turkish Cypriots toward seeking a two-state deal rather than pursuing their stated aim of reunifying the country as a federation made up of Greek and Turkish speaking zones.

Turkish Cypriot President Ersin Tatar has been saying that a two-state solution is the only way for both peoples to live peacefully in coexistence on the island.

Guterres stressed that “the primary responsibility for the future of the process remains with the parties.”

Following consultations over the past months by U.N. envoy Jane Holl Lute, he said both sides and the guarantors have expressed a willingness to attend an informal meeting under his auspices.

“The purpose of the meeting will be to determine whether a common ground exists for the parties to negotiate a sustainable, lasting solution to the Cyprus problem within a foreseeable horizon,” the secretary-general said.

Guterres said the COVID-19 pandemic has widened long-standing fractures within and between the island’s two communities.

He also pointed to rising tensions in the Eastern Mediterranean region over exploration for oil and gas and delineating maritime boundaries.

“I continue to stress that natural resources located in and around Cyprus should benefit both communities and constitute a strong incentive to reach a mutually acceptable settlement in Cyprus without any further delay,” he said.

Cyprus has been divided since 1974 when Turkey used its guarantor rights to intervene in the island after a far-right military coup sponsored by the military junta, then in power in Athens, sought to unite the island with Greece and toppled President Archbishop Makarios III. After decades of interethnic violence and terror, mainly targeting the island’s British colonial rulers until independence in 1960, Turkish Cypriots were forced to live in enclaves after Greek Cypriots unilaterally changed the constitution in 1963. The Turkish Cypriot community was stripped of their political rights in violation of the constitution and founding agreements signed in 1959 between Turkish Cypriot and Greek Cypriot community leaders and guarantor powers Great Britain, Greece and Turkey.

After 1974, the island was divided by a 180-kilometer (120-mile) buffer zone patrolled by the U.N., and crossings apart from those for diplomatic purposes were rare. The Turkish Republic of Northern Cyprus (TRNC), established in 1983, is only recognized by Turkey and faces a long-standing embargo in commerce, transportation and culture. Meanwhile, the Greek Cypriot administration enjoys recognition by the international community as the Republic of Cyprus was established in 1960, which is a member of the European Union.

In 2003, the TRNC government eased the crossing restrictions for Turkish Cypriot citizens and allowed crossings to be made with identity cards and passports without prior notice, while also easing restrictions for those traveling from Greek Cyprus to Turkish Cyprus. The move was a normalization and goodwill gesture a year before a peace plan championed by former U.N. Secretary-General Kofi Annan was put to vote in a referendum and agreed to by the Turkish community but rejected by the Greeks.