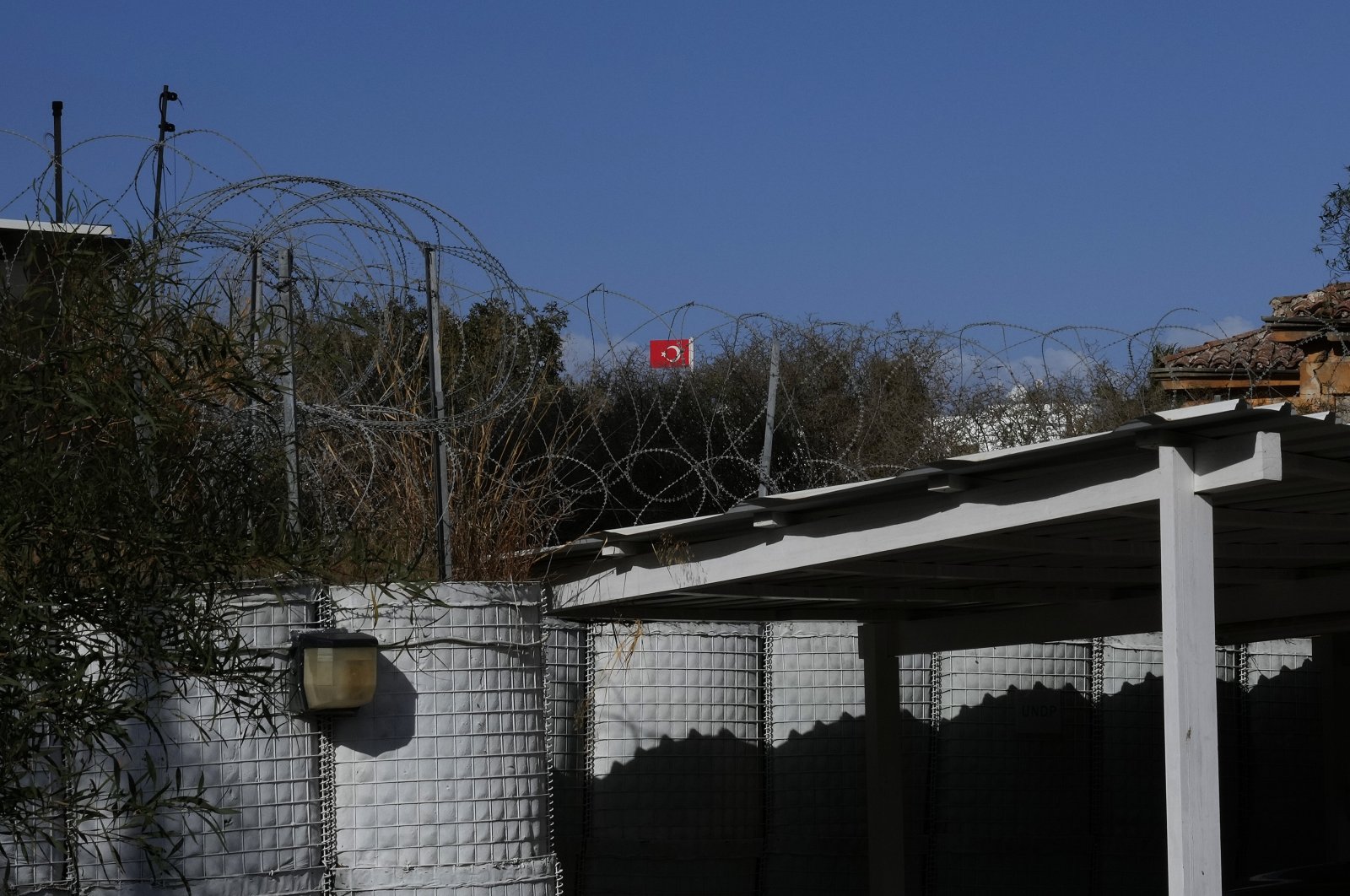 A Turkish flag waves in the Turkish-controlled area in the U.N buffer zone between Turkish Cyprus and the Greek Cypriot administration in the divided capital Nicosia, Cyprus island, Dec. 1, 2021. (AP Photo)
by DAILY SABAH Dec 16, 2021 10:59 am
RECOMMENDED

Any scenario excluding Turkey and the Turkish Republic of Northern Cyprus (TRNC) in the Eastern Mediterranean will fail, TRNC Foreign Minister Tahsin Ertuğruloğlu said Wednesday, underlining that the current hydrocarbon crisis in the region is a product of the aggressive stance by the Greek side.

The minister participated as a speaker at the conference titled "Cyprus Island in the Middle East Geopolitics" organized online by the Center for Middle Eastern Studies (ORSAM).

Ertuğruloğlu noted that the steps taken by the Greek Cypriots and Greece in the Eastern Mediterranean with the support of energy companies from different countries without taking Turkey and the TRNC into account, would not be successful and that the Turkish side would not allow this to happen.

Underlining that Turkey has taken all measures against the aggressive and unilateral activities of the Greeks in the Eastern Mediterranean, Ertuğruloğlu reiterated the importance of the Memorandum of Understanding (MoU) on the Limitation of Maritime Jurisdictions signed between Turkey and Libya in 2019.

Minister Ertuğruloğlu stated that he hopes Turkey will solve the problems between Egypt and Israel and that the safest way is to transfer hydrocarbon resources through Turkey.

Noting that the Turkish side does not attempt to violate the rights of any country in the Eastern Mediterranean, Ertuğruloğlu added that it would be beneficial for the countries of the region to establish good relations with Turkey.

After long years of tensions with some actors in the Middle East and the Gulf region, Turkey this year has launched a process of normalization and reconciliation. President Recep Tayyip Erdoğan said recently that Turkey may launch a similar process to the one it launched with the United Arab Emirates (UAE) with Israel and Egypt as well if the countries take similar steps.

Erturuloğlu also touched upon the island's history and reminded that the Ottomans conquered Cyprus in 1571 and noted that Cyprus had a very important geopolitical position and that many super and international powers had policies regarding the island and the entire region. Stating that the Cyprus issue is not only between the Turkish Cypriots and the Greek Cypriots, Ertuğruloğlu said that besides Turkey and Greece, the European Union, the United Nations and many other countries are parties to this issue.

"But when you talk to Greeks in Cyprus today, they believe the island is a Hellenic Island. Greeks do not see Turkish Cypriots as equal. This has nothing to do with reality. Cyprus has never been a Greek island," he added.

Noting that the Republic of Cyprus was founded by both Turks and Greeks in 1960, Ertuğruloğlu reiterated that the Greeks broke this partnership after only three years, pushed the Turkish Cypriots out of the state and took the state under their sole control. Ertuğruloğlu also emphasized that was one of the main reasons they took this step.

Ertuğruloğlu further said that the international community's acceptance of the Greek Cypriot administration as the only legal representative of the Republic of Cyprus and the whole island is the essence of the Cyprus issue and that this does not contribute to the solution.

Cyprus has been mired in a decadeslong dispute between Turkish and Greek Cypriots, despite a series of diplomatic efforts by the U.N. to achieve a comprehensive settlement. Ethnic attacks starting in the early 1960s forced Turkish Cypriots to withdraw into enclaves for their safety. In 1974, a Greek Cypriot coup aimed at Greece's annexation of the island led to Turkey's military intervention as a guarantor power to protect Turkish Cypriots from persecution and violence.

The TRNC was founded in 1983. It has seen an on-and-off peace process in recent years, including a failed 2017 initiative in Switzerland under the auspices of guarantor countries Turkey, Greece and the United Kingdom. The Greek Cypriot administration entered the European Union in 2004, the same year that Greek Cypriots thwarted a U.N. plan to end the decadeslong dispute.