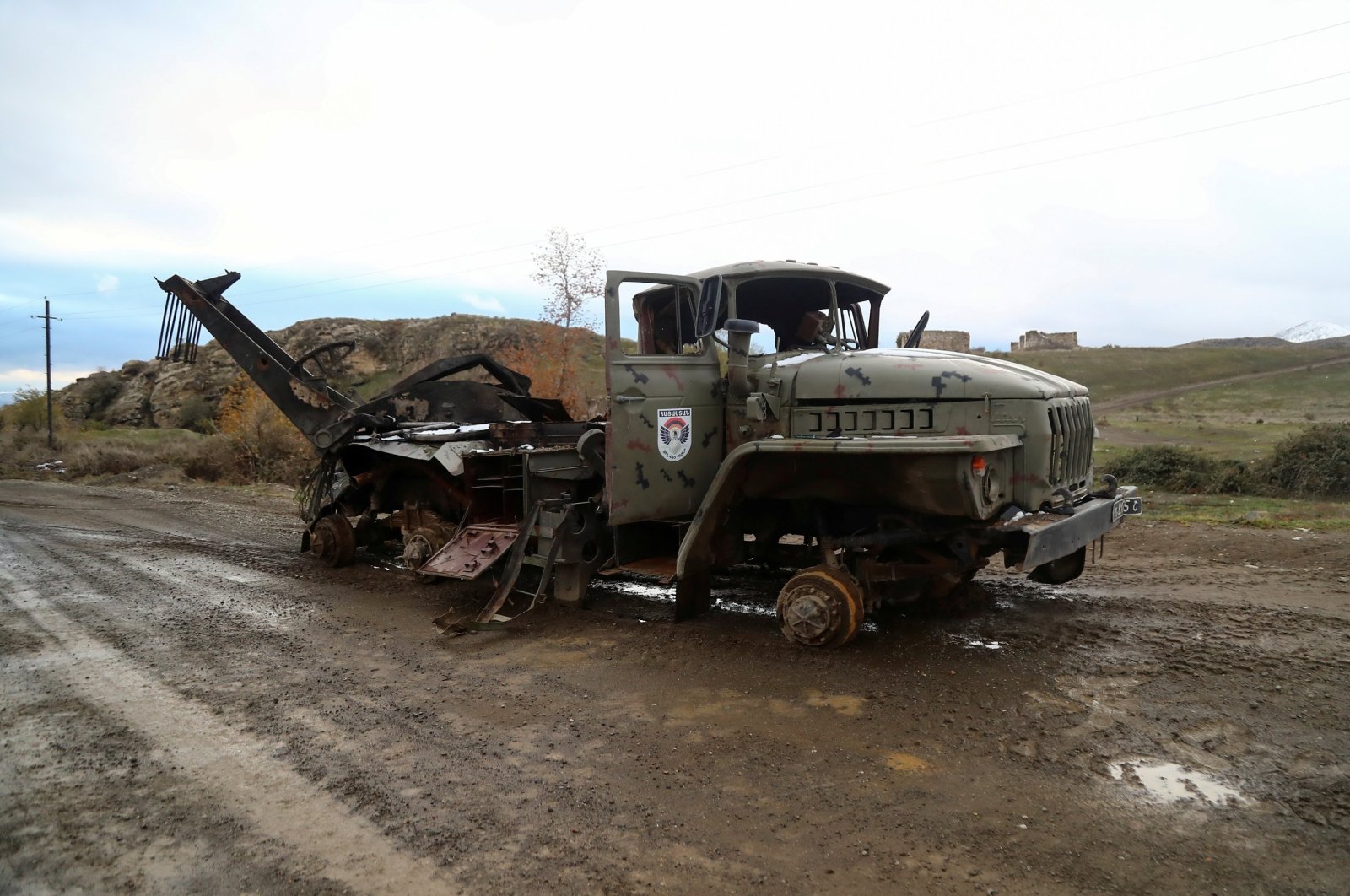 A damaged truck belonging to Armenian forces in an area that came under the control of Azerbaijan's troops following a military conflict over Nagorno-Karabakh, in Jabrayil District, Azerbaijan, December 7, 2020. (Reuters Photo)
by DAILY SABAH Nov 18, 2021 11:16 am
RECOMMENDED

The European Union Wednesday reiterated its call on Armenia and Azerbaijan to show restraint and resume negotiations amid renewed fighting at their shared border.

"The EU is deeply concerned over the recent violence along the Armenia-Azerbaijani border, which has regrettably led to the loss of life," Peter Stano, a spokesperson for the bloc's diplomatic service, said in a statement.

The bloc called on both sides "to exercise utmost restraint, disengage their military forces on the ground," the statement read, urging Armenia and Azerbaijan to respect the cease-fire and return to negotiations.

Seven Azerbaijani service members were killed and 10 more wounded in clashes with Armenia on the border between the two ex-Soviet nations, Azerbaijan's Defense Ministry said Wednesday.

"The situation on the Azerbaijani-Armenian state border has stabilized since the evening of Nov. 16," the statement read. "The provocation and military adventurism committed by Armenia on the state border completely failed."

"We strongly condemn Armenia's continuing military provocations out of vengeance. The military-political leadership of Armenia is directly responsible for escalating the situation in the region and preventing the implementation of the tripartite statement," Baku also said.

It added that it will respond to "all kinds of threats and military provocations against the territorial integrity of Azerbaijan within the internationally recognized borders."

The fighting ceased on Tuesday evening after Russian Defense Minister Sergei Shoigu spoke with his Armenian and Azerbaijani counterparts and urged them to stop.

The Russian-brokered cease-fire held Wednesday at the Armenian-Azerbaijani border, officials said, a day after deadly clashes between the archrivals sparked fears of another flare-up in their territorial dispute.

"Azerbaijan is not alone. Turkey will not leave Azerbaijan alone," he said, adding they will all take steps together to stabilize the region and bring peace.

"Let's look at the steps taken by Azerbaijan, which took back its own lands. Significant projects have been implemented for the stability of the region. (The country) proposed a comprehensive peace agreement," he said and underlined that Armenia must see that these provocations are futile and it will never yield any results.

During a 44-day conflict that started in late September last year, Azerbaijan liberated several cities and 300 settlements and villages that Armenia illegally occupied for almost 30 years.

On Nov. 10, 2020, the two countries signed a Russian-brokered agreement to end the fighting and start a comprehensive resolution of the dispute. The Russia-brokered truce allowed Azerbaijan to reclaim control over large parts of Nagorno-Karabakh and surrounding areas that Armenia occupied for nearly three decades.

A joint Turkish-Russian center was established to monitor the postwar truce. In addition, Russia deployed nearly 2,000 peacekeepers for at least five years to monitor the peace deal.

Since last year's war, both Armenia and Azerbaijan have reported occasional exchanges of fire. However, the new clashes appear to be the worst outbreak of hostilities between the two countries since a six-week war last year over the Nagorno-Karabakh region in which around 6,600 people were killed.