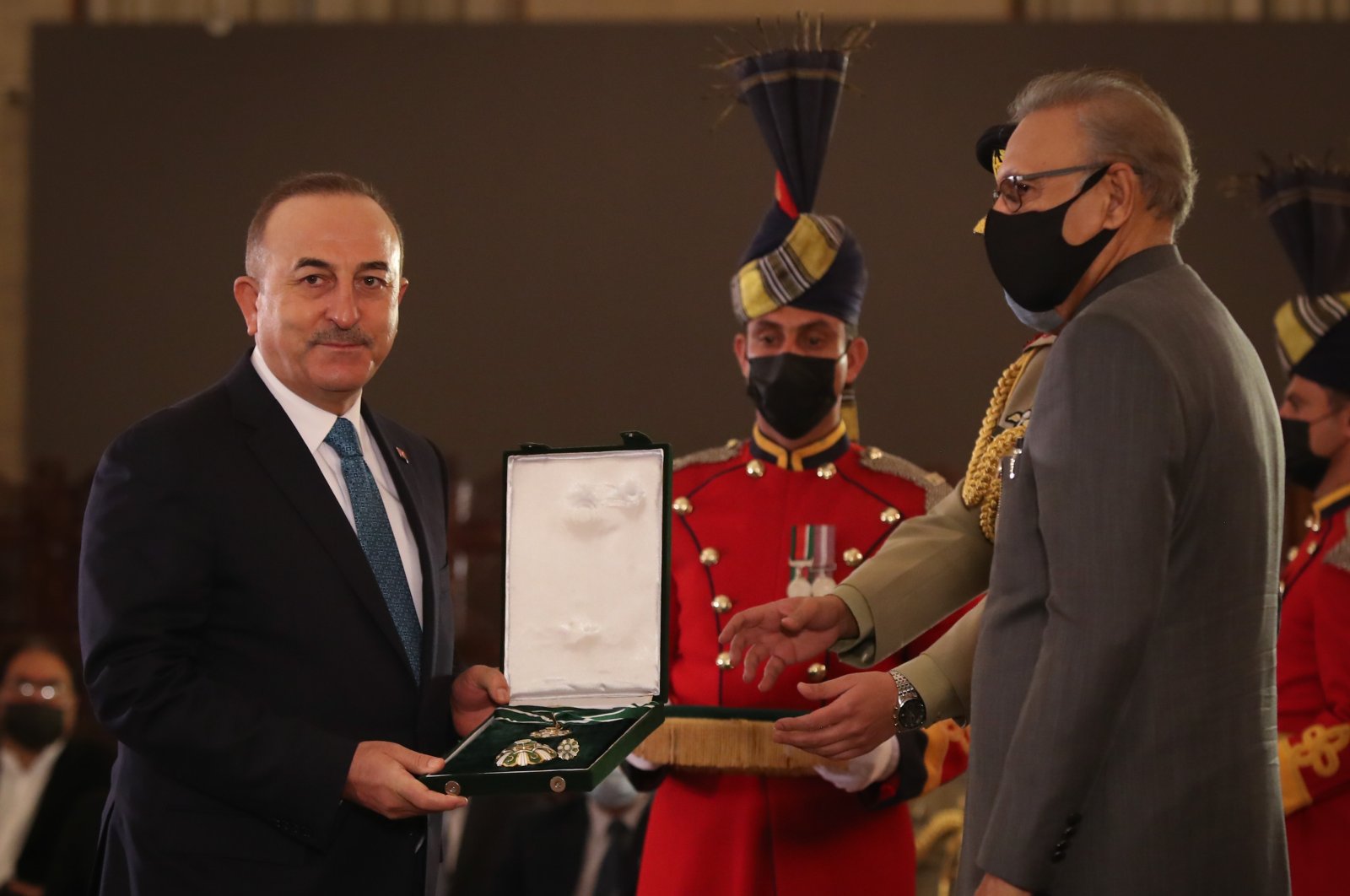 The "excellent" ties between Turkey and Pakistan will only continue to improve in the coming period, Foreign Minister Mevlüt Çavuşoğlu said on Wednesday during his two-day visit to Islamabad.

"Pakistan is our second home," the foreign minister wrote, adding that he is in Islamabad to further "excellent relations."

Çavuşoğlu also said he would proudly keep the Hilal-e Pakistan Award which he was honored to receive during the visit, sharing: "#Turkey-Pakistan Dosti Zindabad!" meaning "Long live the Turkish-Pakistani friendship."

Pakistan is our second home.

We are in Islamabad to further our excellent relations.

Turkey and Pakistan have a well-established relationship spanning decades. On top of the nations' political and economic interactions, many Turkish humanitarian agencies, including the Turkish Cooperation and Coordination Agency (TIKA), are active in the country, providing assistance to those in need. During Erdoğan’s visit to Pakistan in February 2020, the two countries signed a series of memorandums of understanding (MoU) aimed at boosting bilateral trade, economic engagement, communication and cultural ties.

The trade volume between Pakistan and Turkey has risen from around $600 million (TL 4.5 billion) to $800 million over the last five years.

Çavuşoğlu also held a meeting with his Pakistani counterpart, Shah Mehmood Qureshi, during which the two ministers discussed bilateral ties among other regional and international matters. Agreeing to commit to a common strategy protecting their bilateral interests, the ministers expressed their concern about the rise of Islamaphobia seen around the world.

After the ministers' bilateral meeting, a meeting was held between the delegations of the two countries.

Following the meeting, Çavuşoğlu announced on his Twitter account that the two countries discussed a 71-point road map to strengthen relations, increase bilateral trade closer to its true potential and to increase cooperation between the nations' defense industries.

Signed MoU on the activities of Maarif Foundation w/brother FM @SMQureshiPTI of Pakistan.

Discussed 71-point Road Map that will strengthen our relations.

Will bring our bilateral trade up to its true potential.

Will develop our cooperation in defense industry. pic.twitter.com/guZ1jtC5nl

Speaking to Anadolu Agency (AA) about the pact, Harun Küçükaladağlı, TMV's representative in Pakistan, said the agreement recognized TMV as an international civil society organization, legitimizing the organization in the eyes of the Pakistani public.

Küçükaladağlı added that thanks to the pact, TMV will be able to expand its efforts, opening schools, campuses, educational and cultural centers as well as launching student exchange programs.

Currently, TMV provides education in 10 cities in Pakistan, including the capital Islamabad, reaching more than 12,000 students.

The foundation also has nine student dormitories and 1,800 personnel across the country.

The foundation, which was founded on June 17, 2016, officially started work a few months following a brutal coup attempt by the Gülenist Terror Group (FETÖ). One of the foundation's main missions was to take over the schools formerly operated by FETÖ, known for its international network of institutions.

Since its establishment, of the 104 countries the state-backed foundation has contacted, it has set up missions in 52. So far, 19 nations have handed over control of 214 FETÖ-linked schools, including Afghanistan, Chad, Gabon, Tunisia, Venezuela and Iraq. It has also signed protocols with 42 countries to take over FETÖ-linked schools and establish new ones. The foundation has established new schools in 23 nations, including the United States, Albania, Australia, Bosnia-Herzegovina, Burundi, Djibouti, Hungary and Tanzania.

“Today’s pact will enable the Pak-Turk Maarif schools to institutionalize and enable us to open further schools in Pakistan,” Çavuşoğlu said during an address to the student body.

“We are happy and honored to contribute to Pakistan’s education and future with you,” he underlined, adding he hopes a graduate of the Pak-Turk Maarif Schools will one day become Pakistani Foreign Minister.