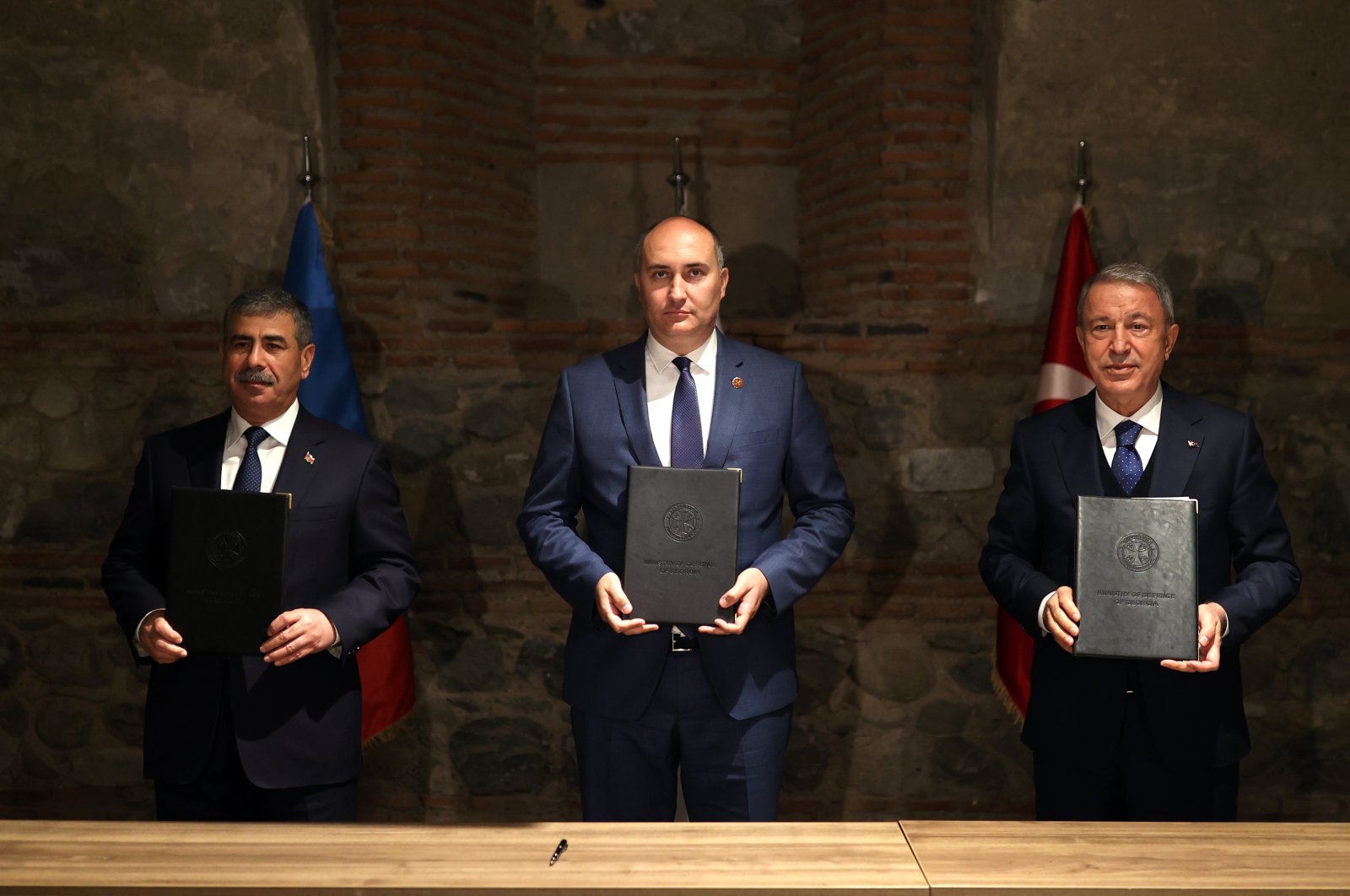 Defense cooperation among Georgia, Turkey and Azerbaijan is of crucial importance for the stability of the entire region, Georgian Defense Minister Juansher Burchuladze said Tuesday.

Burchuladze was speaking at a news conference following a meeting with Hulusi Akar and Zakir Hasanov, his Turkish and Azerbaijani counterparts, at the 8th Georgia-Turkey-Azerbaijan Defense Ministers Meeting at the Georgian capital, Tbilisi.

At the end of the meeting, the defense chiefs inked the Trilateral Meeting Final Statement, which mainly focuses on further improving cooperation among the three countries.

Referring to the geostrategic importance of the region, Burchuladze said he believes that the only possible alternative to solve the present disputes is through peace. He added that the aim is to preserve and maintain regional security and stability through joint efforts.

He also emphasized the significance of trilateral and multilateral military drills, pointing to the ongoing Eternity 2021 military exercises in Georgia where Turkish and Azerbaijani troops are also taking part.

"The training of the Indestructible Brotherhood 2021 exercise to be held in Nakhchivan with the participation of Azerbaijan has been carried out successfully," the Turkish Defense Ministry had said on Twitter.

Burchuladze said Georgia would hold a drill soon and invited Turkey and Azerbaijan to participate. The friendship and unity will last among the three countries, he added.

On his part, Hasanov said the meeting with his Turkish and Georgian counterparts was a clear example of strategic-level trilateral dialogue.

He added that they discussed ways to improve the relations between the three neighboring and friendly countries through bilateral and trilateral meetings.

They also agreed on how terrorist and separatist activities in the region pose a direct threat to its peace, stability and economic development, as well as the security of international activities, Hasanov said.

He noted the importance of solving conflicts through the principles of international law, especially in line with the United Nations, Organization for Security and Co-operation in Europe, and European Council decisions, based on respect toward territorial integrity and internationally recognized borders.

Hasanov underlined that the trilateral engagement of Georgia, Turkey and Azerbaijan should be considered a peaceful message for the preservation of stability. He also voiced agreement on the decision to carry out more joint military drills.

Earlier, Turkish Defense Minister Akar met Burchuladze ahead of the meeting in the Telavi province.

The two sides discussed cooperation in the fields of defense and security.

Akar stressed the need to increase cooperation in the fields of military education and the defense industry.

He noted that the Eternity 2021 military exercises, held with the participation of Azerbaijan, Turkey and Georgia, continue successfully.

He urged the sides to increase joint exercises and personnel exchange programs for training and experience sharing.

During the meeting, the two sides agreed that the next Georgia-Turkey-Azerbaijan defense ministers meeting will be held in Turkey in 2022.

In a separate meeting between the Turkic defense ministers, Akar said a project, called the Fraternal Brigade, was launched to increase the interoperability between Turkey and Azerbaijan, as well as educational planning and administration.

He also voiced his content over relations among the three countries that "keep improving day by day" and said he hopes the meeting will set an example for other countries in the region.

"I believe that the meeting we held in Georgia, an important country in the Caucasus, will provide significant benefits to our countries and armed forces," Akar said.

"We had an opportunity to evaluate all our relations, especially in defense and security," he added.