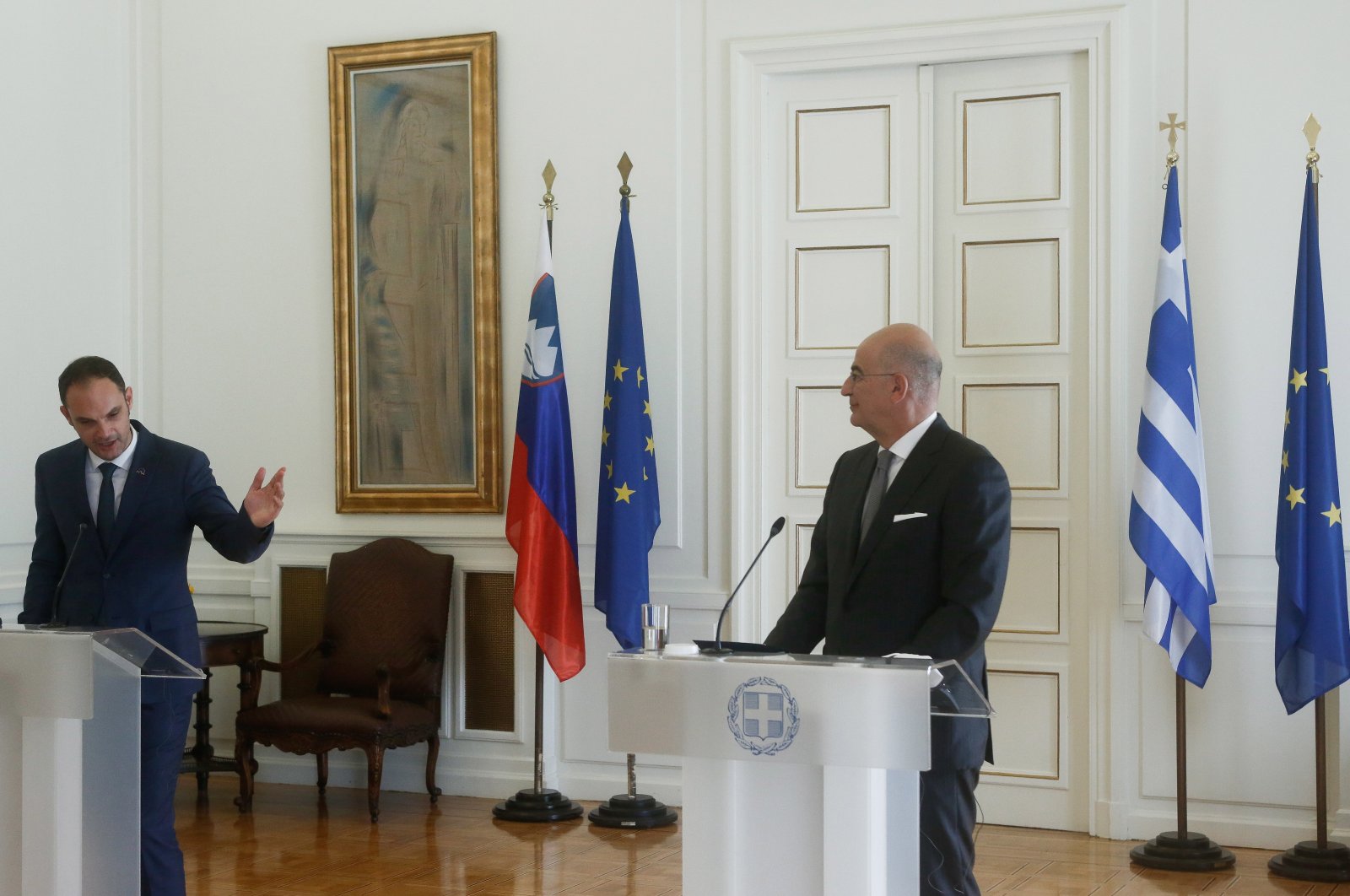 Greece on Wednesday expressed a desire to have constructive relations with both Turkey and Turkish society.

Speaking alongside his visiting Slovenian counterpart Anze Logar, Greek Foreign Minister Nikos Dendias claimed that Turkey is escalating tensions in the Eastern Mediterranean, adding that Greece has no "punitive" attitude toward Turkey.

Dendias added that the European Union should give a clear message to regional countries, particularly those aiming to join or seeking good relations with the bloc, that they must respect the fundamental rules of international law and the acquis communautaire.

Turkey has officially been a candidate for EU membership since 1999. Amid its good faith efforts to follow the EU criteria, it has criticized moves by Athens and the Greek Cypriot administration to block the opening of accession chapters for political reasons.

With regards to EU relations with the countries of the Western Balkans, Dendias reiterated that Greece supports the European perspective of Western Balkan states.

Dendias also claimed that some forces, from both inside the Balkans and elsewhere, want to "remove" the Balkans from Europe by offering "so-called" development aid, exchange programs, military cooperation and cooperation in education.

They want to spread extremism to erode European values, he claimed.

Tensions are once again rising between Turkey and Greece over maritime borders and drilling rights in the Eastern Mediterranean after several months of relative calm.

Turkey, while seeking to defend its fair share of maritime territory in the Eastern Mediterranean, has decried recent provocative Greek moves such as the militarization of Aegean islands that are demilitarized by treaty, navigational alerts (Navtexes) that violate longstanding pacts and illegal encroachment on Turkey's continental shelf.

Foreign Minister Mevlüt Çavuşoğlu recently criticized neighbor Greece's stance on the issue of the Eastern Mediterranean, adding that Turkey will not allow its rights and interests to be ignored. Speaking in a televised interview, the top diplomat said that Greece's Foreign Minister Nikos Dendias is "crying like a kid."

Turkey, which has the longest continental coastline in the Eastern Mediterranean, has rejected maritime boundary claims made by EU members Greece and the Greek Cypriot administration, stressing that these excessive claims violate the sovereign rights of both Turkey and the Turkish Republic of Northern Cyprus (TRNC). Both sides cite a range of decades-old treaties and international agreements to support their conflicting territorial claims.

On the other hand, both Ankara and Athens recently expressed readiness to discuss delimiting their respective economic zones at sea.

Offshore exclusive economic zones are maritime areas agreed on between neighboring states, defining where a country has commercial rights such as the right to explore for hydrocarbons. Those zones can extend to up to 200 nautical miles from a shoreline, or, if sharing the sea area with another state, the equidistance between the two.

But in the case of Greece and Turkey, the issue is complicated by disputes over the extent of their continental shelves and the limit of their territorial waters. The dispute has held up any declaration by Greece to extend its territorial waters from 6 miles to 12 miles in the Aegean.

The two countries relaunched exploratory informal contacts on their disputes early this year.

Despite saying that it has no intention of entering into an arms race with its neighbor and NATO ally Turkey, Greece also announced recently the purchase of three new Belharra frigates from France with the option for one more. Earlier last month, Greece also announced that it was planning to buy six more Rafale fighter aircraft.

Greece's burgeoning arms program is designed to counter Turkish challenges in the Eastern Mediterranean, against which France is among the few EU states to have offered public support in past months.