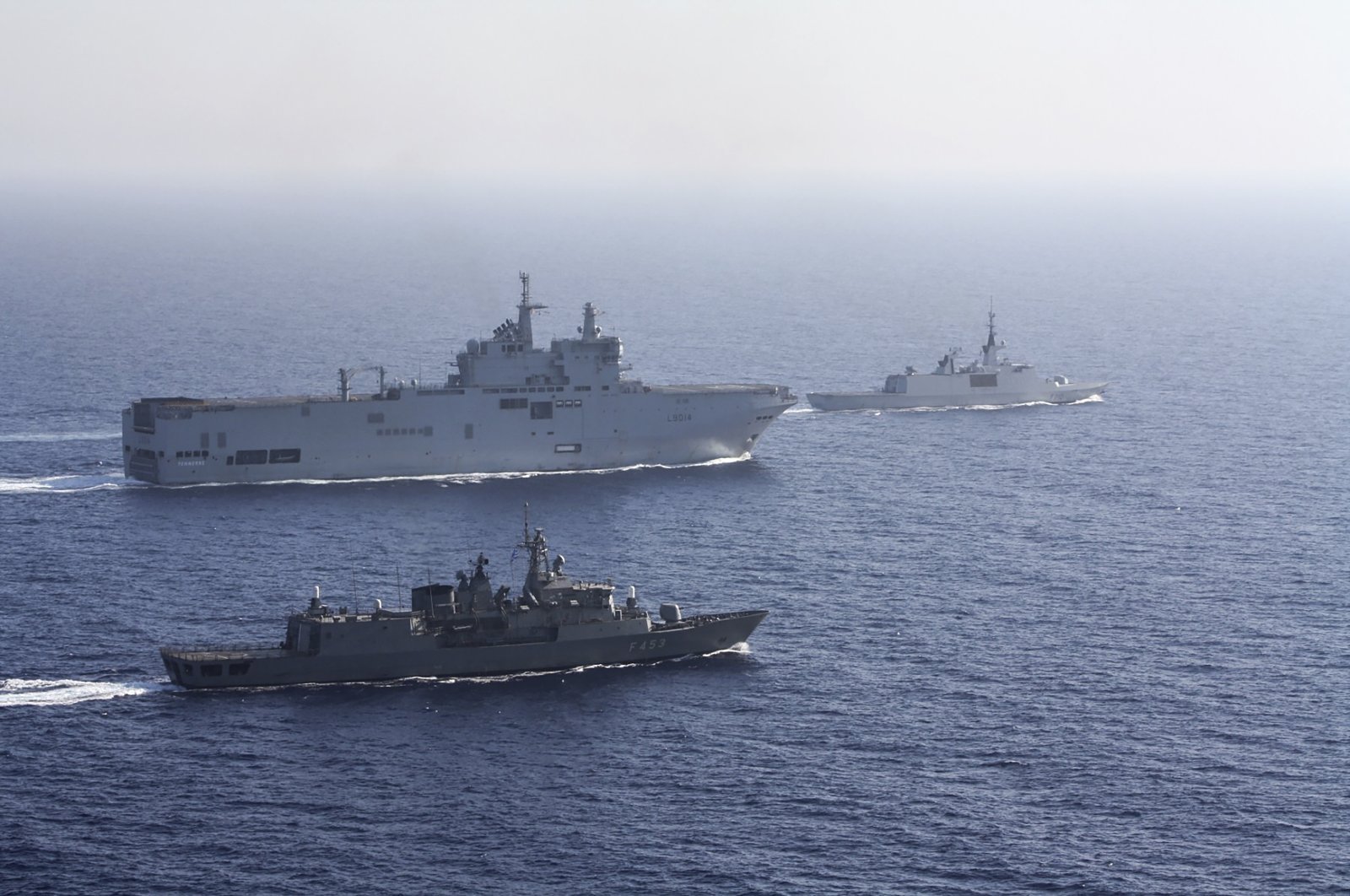 In this photo provided by the Greek Ministry of National Defense, a French Tonnerre helicopter carrier (rear L) is escorted by Greek and French military vessels during a maritime exercise in the Eastern Mediterranean, Aug. 13, 2020. (AP Photo)
by Daily Sabah with DPA
Oct 04, 2021 9:01 am

Tensions are once again rising between Turkey and the Greek and Greek Cypriot administrations over maritime borders and drilling rights in the Eastern Mediterranean after several months of relative calm.

On Sunday, sources in the Greek Cypriot government cited by local media rejected Ankara’s calls to stop explorations by a research vessel commissioned south of the divided island. These statements contradict international maritime law, they claimed, according to state radio.

The research vessel Nautical Geo had begun ultrasonic research of the seabed south of the port city of Limassol on Sunday morning. It is sounding out whether and where a pipeline could be built on the seabed through which natural gas from Israel and Greek Cyprus could be piped to Crete and from there to Central Europe.

The previous evening, the Turkish Foreign Ministry had described these explorations as "provocative activities" that endangered peace and stability in the Eastern Mediterranean. Ankara announced that it would take all "necessary steps on the ground" to stop this.

"The main cause of the tension in the Eastern Mediterranean in recent years has been Greece's and the Greek Cypriot administration's maximalist maritime jurisdiction area claims and unilateral acts that ignore Turkey's and the TRNC's rights and interests," read the statement.

The ministry condemned Greece's recent attempts to violate the continental shelf and the Greek Cypriot administration's planned move to launch research activity on Oct. 3 with an Italian-owned and Maltese-flagged ship.

The Greek Cypriot administration also plans to commence a new drilling operation in the south of the island in November, the statement said, adding that these actions breach Turkish Cyprus' rights and violate Turkey's continental shelf.

"Also, it is being brought to the attention of third countries that they should not be part of these unilateral acts."

Turkey has sent drillships with a military escort to explore for energy on its continental shelf, stressing that it and the Turkish Republic of Northern Cyprus (TRNC) have rights in the region. To reduce tensions, Turkey has called for dialogue to ensure the fair sharing of the region's resources.

The ministry pointed out that President Recep Tayyip Erdoğan called on the European Union to convene an "inclusive conference" in the Eastern Mediterranean last year.

Turkish Cyprus also made a detailed proposal to the Greek Cypriot side in July 2019 regarding hydrocarbon resources, it added.

Turkey's Defense Ministry also said Sunday that the Turkish Armed Forces (TSK) will continue to protect the rights and interests of both Turkey and the TRNC in the Aegean and Eastern Mediterranean, and will continue to be the guarantor of peace and security on the Island of Cyprus in line with international guarantees and alliance agreements.

"Despite all our calls within the framework of good neighborly relations, Greece continues its actions that violate the status of the demilitarized eastern Aegean islands in violation of international agreements. Since the beginning of 2021, it has committed 1,989 violations against the demilitarized status islands with its military sea and air vehicles," it added.

Underlining that Greece has been bolstering its defenses recently, the ministry said: "It is considered that Greece, which is reflected in open sources, is trying to create a balance against Turkey with its increasing armament activities. Necessary attempts are being made through diplomatic channels against Greece's unlawful, provocative and aggressive attitude. and the necessary response is given in the field within the scope of reciprocity."

Despite having said that it has no intention of entering an arms race with its neighbor and NATO ally Turkey, Greece announced on Tuesday the purchase of three new Belharra frigates from France with the option for one more.

It was also reported Friday that the 63rd round of consultative talks between Turkey and Greece will take place in the capital Ankara on Oct. 6. to discuss bilateral issues.

Greece and Turkey are at odds over issues such as competing claims over jurisdiction in the Eastern Mediterranean, air space, energy, the ethnically split island of Cyprus and the status of islands in the Aegean.

In January they agreed to resume talks after a five-year hiatus following months of tensions. Since then, Ankara and Athens have held two rounds of talks, with the previous one in Athens in March.