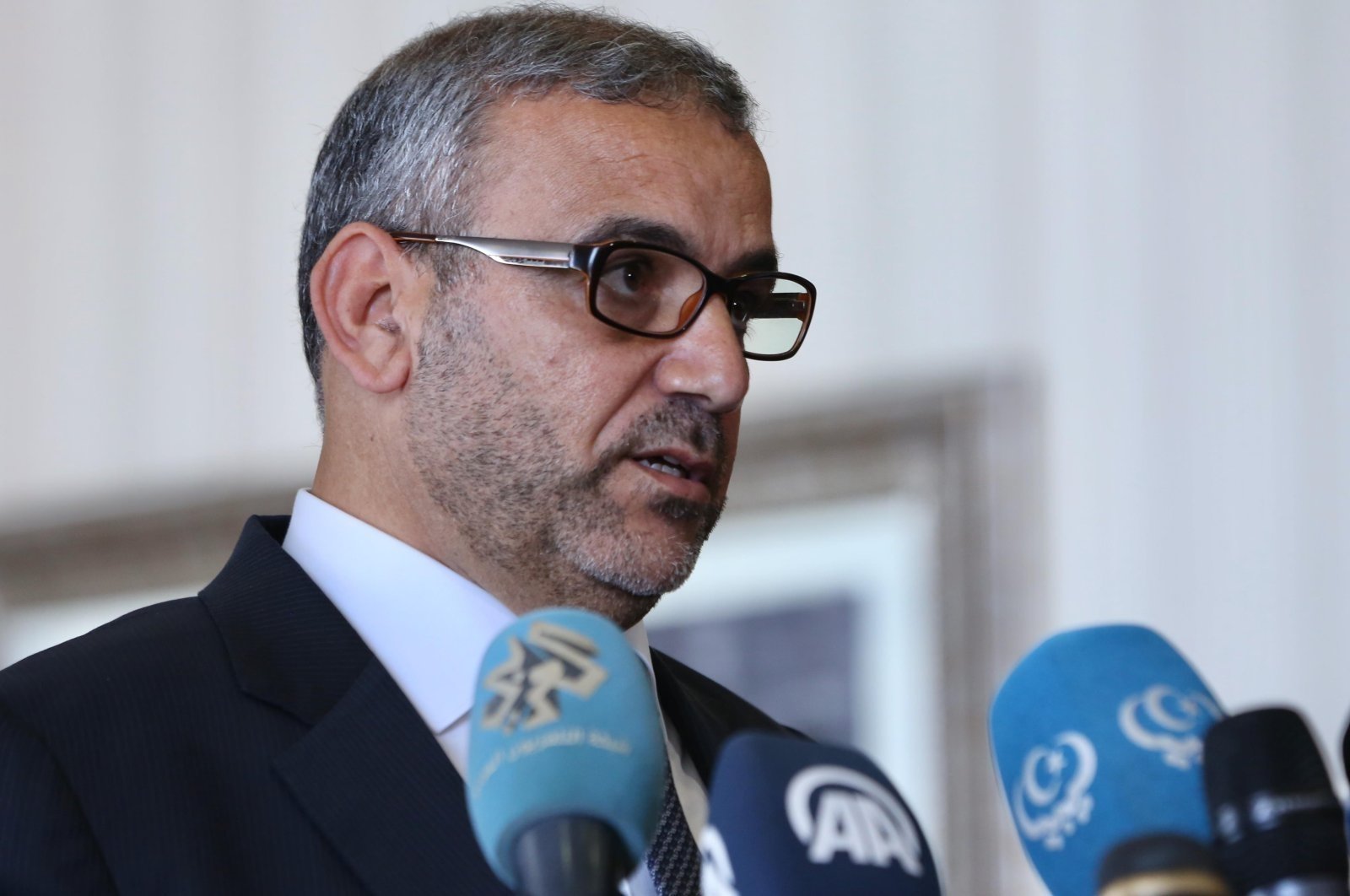 The enhancing ties and cooperation between Turkey and Libya will overpower the conspiracies of France in the Eastern Mediterranean, the head of Libya's High Council of State said.

Speaking to reporters during his visit to Istanbul over the weekend, High Council Chairperson Khalid al-Mishri said that the relations between Turkey and Libya have a historical background, and the relations have grown stronger in economic, military and political terms.

He reiterated that Turkey was the first and only country to react when the legitimate government in Tripoli was attacked by the leader of the illegitimate forces in eastern Libya, putschist Gen. Khalifa Haftar, on April 4, 2019.

Pointing out that Greece, Egypt and Israel acted together to exclude Turkey from the sources in the Mediterranean, al-Mishri said: "Turkey and Libya have protected Turkey's rights and interests in the Eastern Mediterranean by signing the Agreement on the Limitation of Maritime Jurisdiction in the Mediterranean. The steps taken to prevent Turkey from using energy resources despite having rights in the region were also eliminated with this agreement. Libya and Turkey are aware of France's plot in the Eastern Mediterranean. France will not succeed, because Libya will strengthen its relations with Ankara much more."

Stating that countries such as the United States and France provided military and weapon support to Haftar and opposed Turkey's presence there, al-Mishri said that Turkey continues to support the Tripoli government despite everything, and that this support led to Haftar's defeat in Tripoli.

"Turkey's presence in Libya completely complied with international law because the government of Tripoli made calls to many countries and only Turkey responded. All these parties, except Turkish forces, came through unofficial and illegitimate means. Turkey came overtly. The presence of Turkish soldiers was completely in accordance with the international agreements. The Turkish military was also only for training and support purposes."

Turkey on Saturday rebuffed French President Emmanuel Macron's call on foreign powers to remove their forces from Libya as part of efforts to turn the page on a decade of strife, underlining that the Turkish military presence there is to help the Libyan army train.

Macron told an international conference on Libya in Paris on Friday that "Russia and Turkey must withdraw their mercenaries without delay."

France itself has faced accusations of backing Haftar but has always insisted it has been fully objective in the conflict.

Turkey sent only a low-level delegation to Paris as a sign of continued displeasure with Macron's foreign policy stance.

In April 2019, Libya’s Haftar and his forces, backed by Egypt, Russia, France and the United Arab Emirates (UAE), launched an offensive to try and capture the capital, Tripoli. His 14-month campaign collapsed, and the fall of Tripoli was prevented after Turkey stepped up its military support of the United Nations-backed government.

Al-Mishri also said that next month's elections might be postponed by three months, citing disagreements over electoral laws as the main reason that could possibly cause the delay.

Libya's presidential and parliamentary elections are set to take place on Dec. 24 under a U.N.-sponsored agreement reached by Libyan political rivals during meetings in Tunisia on Nov. 15, 2020.

The oil-rich country's electoral commission on Nov. 8 opened registration for candidates in the polls. Tensions, however, have been ongoing between parliament, the High Council of State and the unity government regarding electoral powers and laws.

Al-Mishri said the High Council of State "will not resort to force to prevent the organization of elections" but called for a boycott of the vote.

"If the turnout is zero in a number of electoral districts, this makes them legally void," he noted.

Stating that the Supreme Council wants to hold a legal election in Libya, al-Mishri pointed out that France and Egypt are trying to intervene.

Stating that they will not accept an election position that the U.S. and other countries try to dictate to them, al-Mishri said: "Turkey and Italy do not favor and do not support an erroneous election in Libya. Because they think that an election made with faulty laws will cause the country to be divided, dragged into a new war, and they support us in this regard.”

Al-Mishri stressed that if the presidential and parliamentary elections are held in a fair environment, Libyan Prime Minister Abdul Hamid Mohammed Dbeibah will gain a majority.

Al-Mishri's remarks come as European powers on Friday at an international conference in Paris threatened sanctions against those obstructing or undermining the political transition in Libya.

Dbeibah said at a news conference of the meeting that participants in the international conference for Libya agreed to sanction those who refuse to accept the results of the forthcoming parliamentary and presidential elections.

Dbeibah said the conference managed to "reaffirm extremely important points that can pave the way for the organization of elections."

On the other hand, there are serious steps being taken in Libya toward compromise over an election planned for December as part of a peace process, the country's Presidential Council President Mohammad Younes Menfi told Reuters.

"We must be optimistic and think that the elections will be on time with the agreement of Libyans," he said in an interview.

"Now there are serious steps to make a consensus to hold the election on time on Dec. 24," he added, without giving any details.

Disputes over the schedule and rules for Libya's election, including over who should be allowed to run, threaten to derail a U.N.-backed peace process that is seen as the best hope in years to end a decade of chaos.

Menfi was in Paris for Friday's international conference on Libya, at which world powers agreed to consider sanctions for anybody who disrupts the election but made no move to bring its rival factions together to agree on rules for the vote.

The vote was called through a U.N.-backed road map that demanded simultaneous presidential and parliamentary elections on Dec. 24. However, a law issued by Parliament Speaker Aguila Saleh pushed the parliamentary vote to a later date.

Heightening the stakes at play, some of the most prominent candidates are highly controversial figures such as Saif al-Islam Gadhafi, who announced his candidacy on Sunday. Gadhafi was sentenced to death by a Tripoli court in 2015 for war crimes and is wanted by the International Criminal Court (ICC).

Question marks also hang over other likely candidates, including eastern commander Haftar, whom western factions accuse of war crimes, which he denies, and interim prime minister Dbeibah who had vowed not to run.

"We are trying as much as possible to end this process in a democratic, transparent and acceptable way for all Libyans on Dec. 24 so that power is handed over to an elected authority," Menfi said.

He said there should be no disputes over candidates who meet the requirements of electoral laws once they have been agreed upon.

"We are not worried about the participation of any Libyan if they meet the conditions of the electoral laws," he said.

In a statement, the council called for taking all measures to ensure a "comprehensive elections process" with a view to building confidence among the parties and ensuring "transparency and fairness of the polls."

The statement also underlined the importance of international efforts to secure and monitor the electoral process.