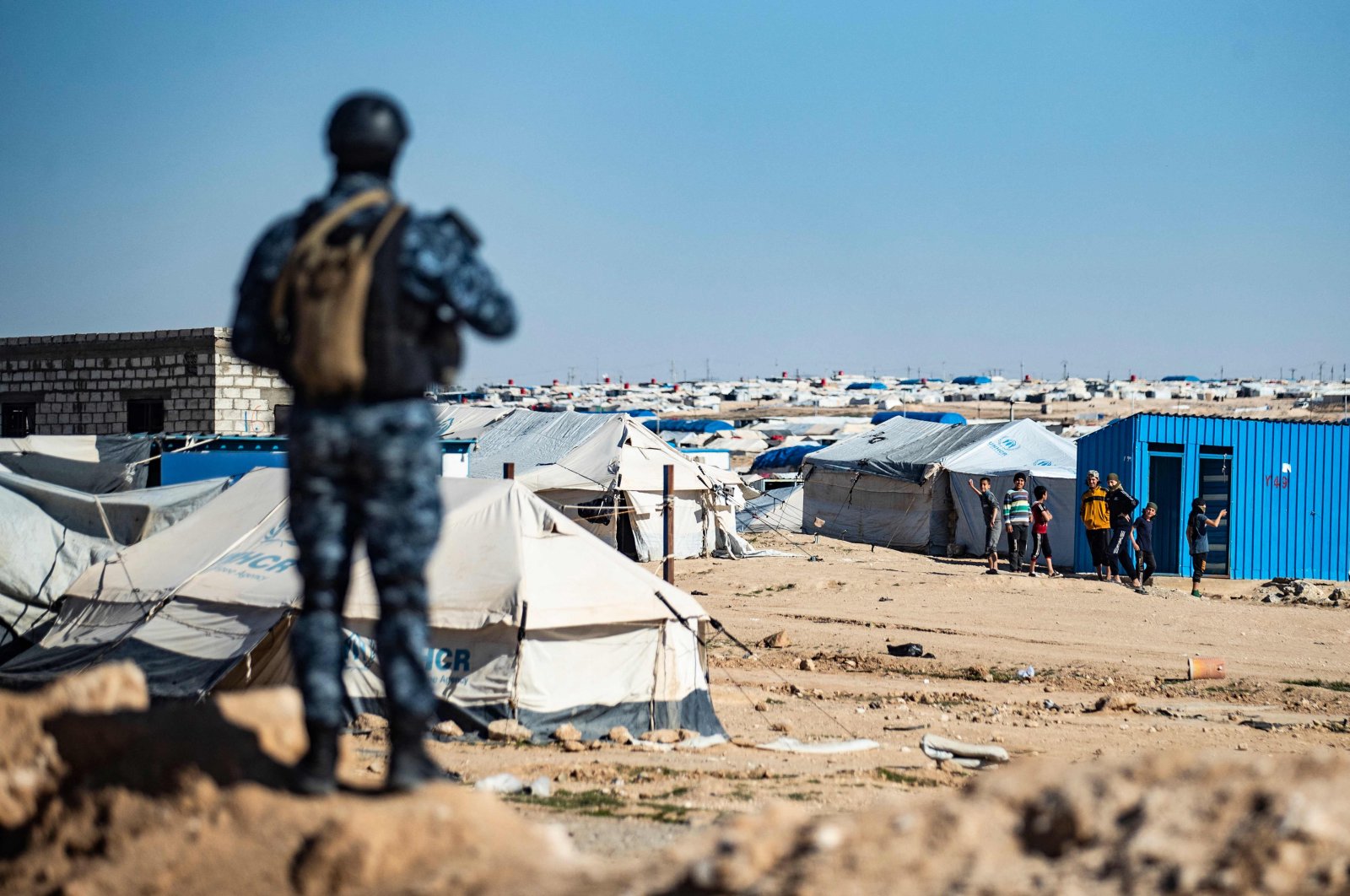 Special forces of the Syrian Democratic Forces keep watch in the vicinity of the al-Hol camp, the larger of two Kurdish-run displacement camps for relatives of Daesh members in Syria's northeast, March 30, 2021. (Photo by Delil Souleiman via AFP)
by Anadolu Agency Mar 31, 2021 11:31 am
RECOMMENDED

Turkish officials on Tuesday reiterated the country's calls for "international solidarity and burden-sharing" for displaced Syrians as the civil war in its southern neighbor marks its 10th year.

"International solidarity and burden-sharing is essential to support the neighboring countries," Turkey's Deputy Foreign Minister Sedat Önal said in a video message to the conference "Supporting the Future of Syria and Region" organized by the United Nations and European Union.

"We look forward to the European Union's continued cooperation in this regard," Önal added.

Coupled with the impact of the coronavirus, the humanitarian situation has worsened for uprooted Syrians, Önal said: "For more than 4 million Syrians, Turkey is the only gateway for the U.N. cross-border humanitarian assistance."

"The Security Council will consider the extension of Resolution 2533 in June 2021. This time, we are faced with a serious risk of losing the entire U.N. cross-border mechanism," he added.

Önal underlined that it was of the "utmost importance" that the international community ensure that "millions of Syrians are not deprived of this life-saving assistance."

"We are hosting almost 3.7 million Syrians in Turkey and together with IDPs (internally displaced persons) on the other side of the border, we are looking after the needs of almost 9 million Syrians," he said.

Önal also mentioned the "facilitation of voluntary, safe and dignified return of refugees to their country," and he said this "should be part and parcel of our overall efforts to find a durable solution to the Syrian crisis."

Hundreds of thousands of people have since been killed and more than 10 million displaced, according to U.N. figures.

Önal said that over the past decade, the world has been witnessing in Syria one of the worst human tragedies in history. "Hundreds of thousands of people were killed. More than half of Syria's population have been displaced."

"Just recently we witnessed another brutal attack. On March 21st, a hospital in Al Atareb was targeted. Several civilians, including a child, lost their lives," he noted.

"The Syrian people have suffered too much for too long. They cannot afford to endure another decade of loss and suffering.

"A lasting political solution on the basis of U.N. Security Council Resolution 2254 is the only way to end the plight of the Syrian people," he added, referring to a 2015 resolution calling for a cease-fire and political settlement in Syria.

"Such a solution can only be achieved through the alignment of positions of all stakeholders inside and outside of the country," he stressed.

Underlining that Turkey "actively takes part in and supports processes in Geneva and Astana," Önal said Ankara supports "the efforts of U.N. special envoy Geir Pedersen in facilitating and advancing the work of the Constitutional Committee."

However, he added that there was an "obvious need" to inject dynamism into the talks in Geneva and that progress in the political process was directly linked to the situation on the ground in Syria.

"Preserving calm on the ground is also key for protecting civilians and thus preventing additional refugee flows. Terrorism is yet another challenge we need to confront collectively," he said.

Turkey cleared an area over 8,000 square kilometers (3,089 square miles) from the Daesh and YPG terrorist groups and the success of these counterterrorism operations has allowed more than 420,000 Syrians to return to their homes, he added.

Önal also underlined that, though continuing to be vigilant against the reemergence of Daesh, "we should not turn a blind eye to other malign activities."

He cautioned that the YPG's "separatist agenda" in northeast Syria continued to pose an "existential threat not only to our national security but also to Syria's territorial integrity. Our resolve to eliminate this threat remains intact."

In its more than 40-year terror campaign against Turkey, the PKK, listed as a terrorist organization by Turkey, the U.S. and the EU, has been responsible for the deaths of 40,000 people, including women, children, and infants. The YPG is the PKK's Syrian offshoot.

In its fight against Daesh, Turkey became one of the first countries to declare it a terrorist group in 2013.

"What we face in Syria represents a very dark picture. The ongoing crisis has cost hundreds of thousands of lives. More than 13 million people in Syria are in need of help. Seven million people were forced to leave their homes. About 6 million people sought safety in other countries," Kıran said.

"Having a 900-kilometer-long border, we directly witness the suffering of the Syrian people," he said. "Today, 4 million forcibly displaced people are living in our country. Almost 3.7 million of them are Syrians. We are hosting the largest refugee population in the world."

Underlining that Turkey "practically assumes the responsibility" of 9 million Syrians, including those in Syria, Kiran said: "In coping with this crisis, we put humanitarian values before narrow political interests."

"Without any discrimination, we have opened our arms and hearts to refugees seeking peace and safety in our country. Protecting the right to life of refugees is a legal and moral responsibility."

Kıran also underlined that pushing refugees back and "denying the right of asylum" was against international law.

"Recently, systemic pushbacks by Greece reached a new level. On March 19, two asylum-seekers were found dead and five were rescued by the Turkish coast guard," he said.

"According to the statements of survivors, Greek officials tied their hands and left them in the sea without boats. This is a clear violation of international law and against our moral responsibility to protect the right to life," he said.

In 2016, the EU and Turkey concluded a deal on migration in which the EU promised to provide 6 billion euros ($7 billion) in financial assistance to be used by the Turkish government to finance projects for Syrian refugees, and Turkey agreed to help stop irregular migrants from heading to Europe.

"It is also unfortunate to see these incidents while we are celebrating the 70th anniversary of the 1951 Geneva Convention. We expect from the EU and all member states to respect the right to life and treat asylum-seekers with human dignity," he explained.

'International community should act as a whole'

"We are working to improve their living conditions. Their active participation in social and economic life is an essential element of our approach."

"However, the sustainable solution is voluntary, safe and dignified return," he added.

Urging the international community and the EU to "do more to construct necessary infrastructure and to improve living conditions in Syria," Kıran noted that Turkey has provided $1.1 billion (TL 8 billion) in humanitarian aid for the refugees in northwestern Syria. "In addition, we constructed or repaired around 900 schools, 27 sports facilities, nine hospitals and 70 medical centers in northwest Syria."

He highlighted that these steps significantly improved living conditions in the region, adding: "Recently, we have constructed around 32,000 brick shelters in northwest Syria. Almost 19,000 families have already settled. We aim to complete more than 52,000 units by summer.

"Over 420,000 Syrians have already returned safely and voluntarily from Turkey to the regions cleared of terrorism."

Kıran also stressed the importance of "responsibility sharing to provide necessary conditions for the voluntary return of refugees."

"As our president, Recep Tayyip Erdoğan underlines 'our fates are sealed and our destinies are common in dealing with the international refugee crisis.'

"The international community should act as a whole to develop lasting solutions to this humanitarian tragedy," he said.

Pointing out that opening safe and legal pathways for Syrians and increasing resettlement quotas would be essential elements of a durable solution, Kiran added: "In this respect, we expect the EU to activate the Voluntary Humanitarian Admission Scheme."

"We value our cooperation with the EU through the Facility for Refugees in Turkey (FRIT). But, we have not received all of the promised 3+3 billion euros (6 billion euros) under FRIT. We expect the EU to fulfill its commitments. Our cooperation should also continue after FRIT-I and II," he said.

Kıran also highlighted that Turkey welcomes the conclusions of the EU Council meeting on March 18 to continue providing financial assistance to Turkey.

He said the post-meeting statement "sets a good example of how Turkey and the EU can contribute to the security, stability, and prosperity of the region," adding: "We need to update the March 18 statement according to the changing circumstances."

The EU and Turkey "have to work on starting customs union modernization, implementing visa liberalization, increasing cooperation on the fight against terrorism and restarting Turkey-EU high-level dialogue," he added.

According to Kıran, Turkey and the EU "should improve our cooperation on migration management in mutually agreed terms."

He said the EU "has to take into consideration the massive burden Turkey has been shouldering since the beginning of the crisis."

"Further engagement of the international community to support host countries is also vital," he stressed.

"Therefore, we value the U.N. Regional Refugee and Resilience Plan. We thank all partners that contribute to the plan. Our expectation is the full disbursement of the funds, which are vital for the refugees."

"Stronger support for refugees and their host countries is essential to mitigate the humanitarian cost of this crisis," he said. "We can only do this by effective contribution by the international community."