Int'l community should be sensitive in helping Afghanistan: FM 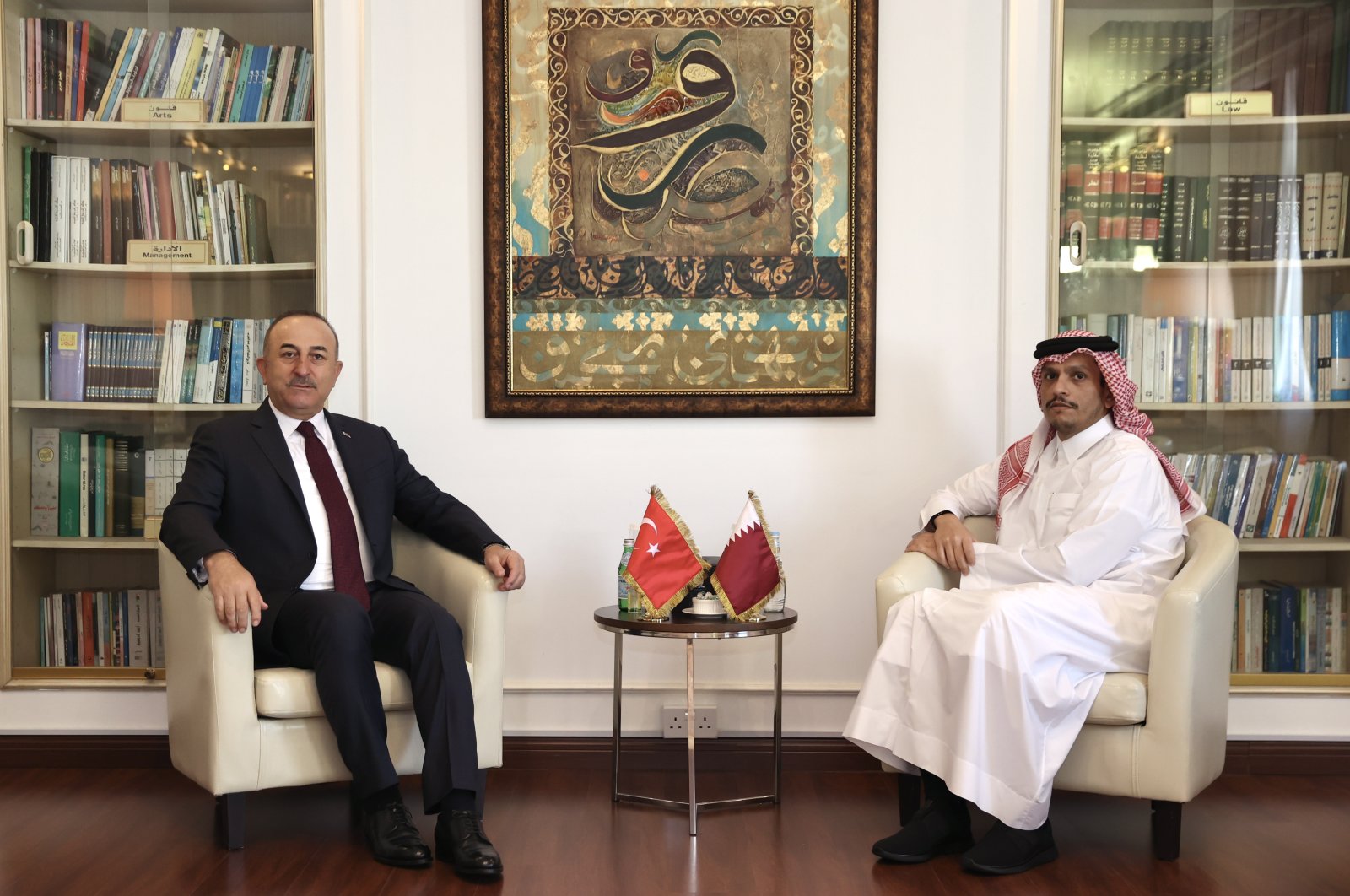 The international community needs to deliver humanitarian aid to the Afghan people, Foreign Minister Mevlüt Çavuşoğlu said Monday, underlining that the sensitivity shown by Qatar and Turkey should set an example.

Speaking at a joint news conference with his Qatari counterpart Sheikh Mohammed bin Abdulrahman Al Thani in Doha ahead of the seventh meeting of the Turkey-Qatar Supreme Strategic Committee, Çavuşoğlu said: "The Afghan people need serious humanitarian aid. The international community needs to deliver this humanitarian aid to the Afghan people, regardless of political motives. Qatar's and Turkey's sensitivity should set an example in this regard."

Underlining that he is working in coordination with institutions of both countries to deliver additional humanitarian aid, Çavuşoğlu said Turkey has allocated funds that were transferred for providing humanitarian aid.

"Turkish Maarif Foundation continues its educational activities. It keeps many of its schools there open and 10 of these are schools for girls," he added.

The Turkish Red Crescent (Kızılay) and the Qatari Red Crescent are actively delivering aid to the Afghan people in the field, he said.

Hailing Qatar's efforts to achieve peace and an agreement in Afghanistan, Çavuşoğlu said they also discussed ways to keep the airports open in Afghanistan. "We are going to act together," he added.

These issues need to be well negotiated with the Taliban, he said, adding that Turkey's cooperation with Qatar continues in different fields.

The minister also said Turkey is not asking Qatar to send any money to help overcome the rapid devaluation of the lira. He added discussions ahead of President Recep Tayyip Erdoğan's visit to Doha focused solely on improving ties.

"We didn't come to Qatar to ask them to send any specific (amount of) money. We are here only to discuss improving our ties," he told reporters.

Doha and Ankara are set to sign dozens of agreements during Erdoğan's visit to Qatar as the Gulf state keeps a close eye on the economic situation in Turkey, the Qatari foreign minister also said.

The Turkish economy is built on a solid foundation and Qatar has huge investments in Turkey, he added.

"Qatar and Turkey are continuously working with the interim government in Afghanistan to reach an agreement to open the airport (so it can function) normally," Al Thani also said.

After the Taliban seized control of Afghanistan, technical teams from Turkey and Qatar started working on getting the Kabul Hamid Karzai International Airport back to operational standards. Turkey offered technical and security assistance at the airport. Keeping the airport open after foreign forces handed over control is vital not just for Afghanistan to stay connected to the world but to maintain aid supplies and operations. Turkey has been working with Qatar to reopen the airport in the Afghan capital Kabul for international travel. However, repairs are needed before commercial flights can resume.

The Turkish government has adopted a pragmatic approach toward the recent events in Afghanistan. Underlining that new realities have emerged in Afghanistan, Ankara said it would move forward accordingly while keeping communication with all relevant actors open. The Taliban say they want international recognition but warn that weakening their government will affect security and spark an even bigger exodus of migrants from the country. Taliban officials previously noted that they want Turkey to provide aid and support to the Afghan people. They called on Turkey to be the first country to recognize the new administration in Afghanistan formally. Turkey, a NATO member, maintained its embassy in Afghanistan after Western countries withdrew following the Taliban takeover and has urged those countries to step up engagement. At the same time, it said it will only work fully with the Taliban if they form a more inclusive administration.

In the last two decades, relations between Turkey and Qatar have witnessed rapid development in various fields. In a volatile region like the Middle East, the ability of the two countries to maintain strong relations and have a convergence of views on many regional and international matters represent a rare "distinguished experience" that has provided a strong basis for increased interdependence and cooperation between the two allies.

While relations between Turkey and Qatar officially began in 1979 with the opening of the two countries' embassies in Doha and Ankara, they witnessed a major boost recently. In 2005, Erdoğan, who was then the country's prime minister, visited Qatar alongside a number of his Cabinet members. The two countries agreed to develop economic relations, especially in the field of energy. Several other high-level visits followed, which have seen more deals reached in various fields. In 2008, the first Turkish-Qatari Business Forum was held in Doha, in the presence of the then Turkish President Abdullah Gül. In the same year, the two countries signed a memorandum of understanding (MoU) to start comprehensive cooperation between them in various fields. In 2013, Erdoğan inaugurated the new headquarters of the Turkish Embassy in Doha, and Qatar was the first Arab country he visited after assuming the presidency in 2014. In December 2014, President Erdoğan and the emir of Qatar, Sheikh Tamim, signed an agreement to establish the Joint Strategic Committee between the two countries.

Doha hosted the first session of the Joint Strategic Committee and a milestone achievement was made as the two countries agreed to cement relations between their respective armies. Other sessions followed with the two countries taking turns to host them. Over the years, the two countries have widened their horizon of cooperation to include health, technology and scientific cooperation, and intellectual property among others. Of all the agreements signed since the establishment of the Joint Strategic Committee, defense and military cooperation has made the fastest progress with an agreement reached in December 2014 to station Turkish forces on Qatari soil. The Turkish Parliament ratified the deal in March 2015. The new headquarters of the Turkish-Qatari joint forces known as Khalid bin Al Walid Base was opened in December 2019 in the presence of senior military leaders from the two countries.

On June 5, 2017, Saudi Arabia, the United Arab Emirates (UAE), Bahrain and Egypt abruptly severed diplomatic relations with Qatar and imposed a land, sea and air blockade in hopes of making it comply with a long list of demands. The four states accused Doha of "supporting terrorism," an allegation vociferously denied by Qatar, describing the Saudi-led embargo as a violation of international law. But the Turkish response was decisive. Defense Minister Hulusi Akar immediately stated that Turkey would not close its base in Qatar. Two days later, on June 7, the Turkish Parliament promptly approved legislation allowing the deployment of Turkish troops to Qatar. Furthermore, Turkey made food shipments, water and medicine to Qatar via air and sea freight. The Turkish government also promised to provide the necessary materials to build projects for the FIFA World Cup 2022. In return of good faith, Qatar announced $15 billion (TL 206.6 billion) in direct investments in the Turkish economy, following the sharp decline in the Turkish lira in August 2018.