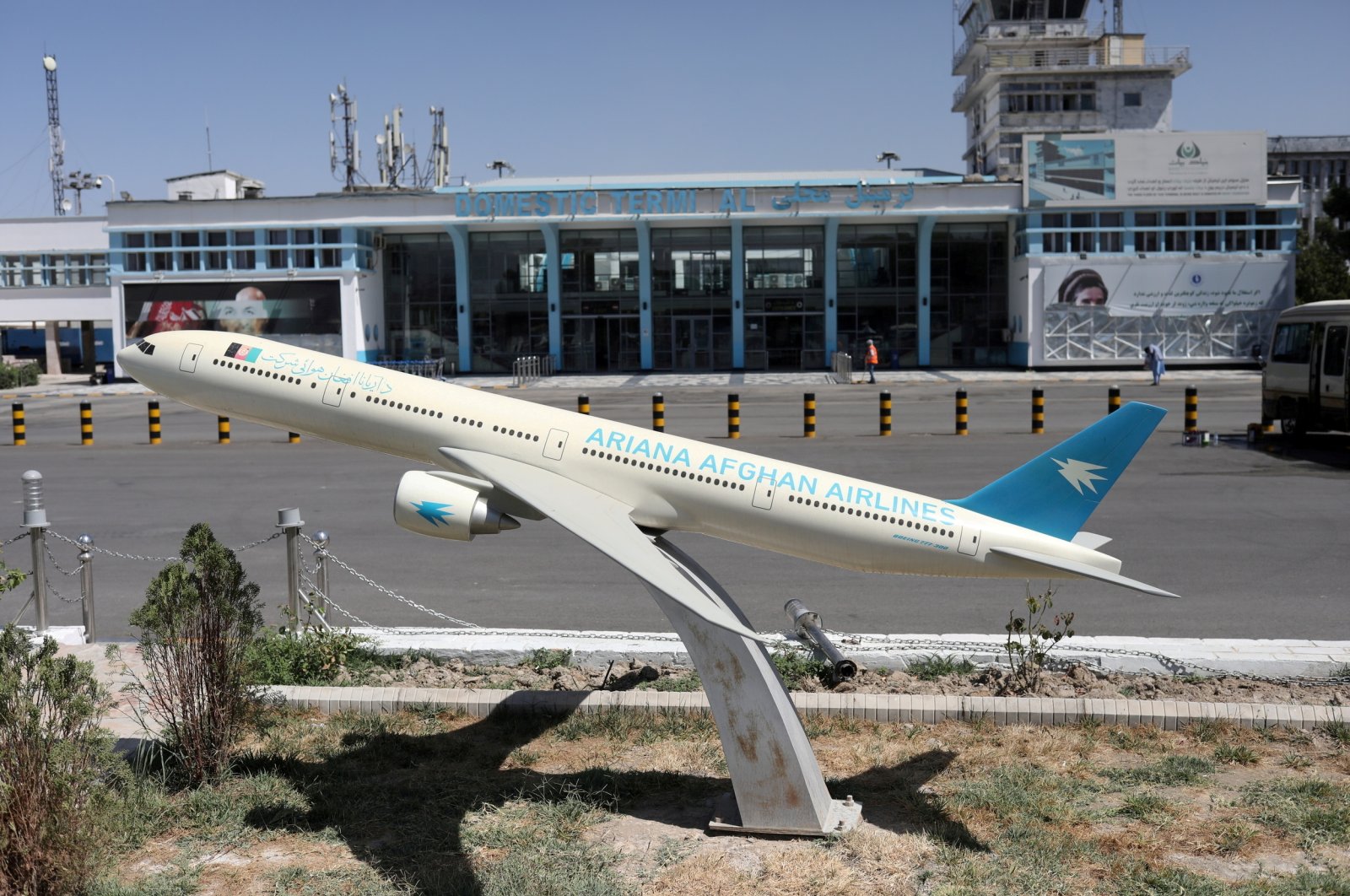 A model of an Ariana Afghan Airlines jet is seen in front of the international airport in Kabul, Afghanistan, September 5, 2021. (REUTERS Photo)
by DAILY SABAH Nov 16, 2021 11:10 am
RECOMMENDED

Together with Qatar, Turkey continues to work on the operation of Kabul Hamid Karzai International Airport, which is important for all Afghan people, Defense Minister Hulusi Akar said Tuesday.

Speaking to Turkish Parliament's Planning and Budget Committee, Akar stated that the Turkish Armed Forces (TSK) has undertaken important duties in Afghanistan and that, in accordance with the United Nations and NATO resolutions, approximately 20,000 personnel have been working in Afghanistan since 2002 within the body of the TSK.

"After the U.S. and NATO's decision to leave Afghanistan, in the last period that developed faster than expected and the conditions became more difficult, the evacuation decision was taken and the process was successfully completed in less than 48 hours as planned," he said.

"As Turkey, we will continue to closely follow the developments in the region from now on," Akar added.

Within 10 days in August, the Taliban had announced its control of most of Afghanistan in parallel with the United States withdrawal from the country after 20 years of military presence. Shortly after the withdrawal of forces, technical teams from Turkey and Qatar started working on getting the airport back to operational standards.

After the Taliban seized control of the country, Turkey offered technical and security assistance at the airport. Keeping the airport open after foreign forces handed over control is vital not just for Afghanistan to stay connected to the world but to maintain aid supplies and operations.

The Taliban say they want international recognition but warn that weakening their government will affect security and spark an even bigger exodus of migrants from the country. Taliban officials previously noted that they want Turkey to provide aid and support to the Afghan people. They called on Turkey to be the first country to formally recognize the new administration in Afghanistan.

Regarding the tensions in Eastern Mediterranean, Akar also said that Turkey always responded to Greece following the diplomatic norms on the issue "despite all kinds of unjust and unlawful actions of Greece."

The minister said Turkey would continue to protect the rights of Turkish Cypriots in the Eastern Mediterranean.

"We are determined and capable of protecting our rights and interests as well as those of the TRNC (Turkish Republic of Northern Cyprus)," he stated.

Tensions are once again rising between Turkey, Greek and Greek Cypriot administrations over maritime borders and drilling rights in the Eastern Mediterranean after several months of relative calm.

Akar said 2,426 terrorists have been eliminated this year so far.

"I would like to express that all operations carried out for the security of our country and nation are carried out in accordance with international law, respecting the rights and laws of Iraq and Syria, within the scope of the right of self-defense, and only targeting terrorist elements in the region," he said.

Since 2016, Turkey has launched a trio of successful anti-terror operations across its border in northern Syria to prevent the formation of a terror corridor and enable peaceful settlement of residents: Euphrates Shield (2016), Olive Branch (2018) and Peace Spring (2019).

Stating that they have expressed at every level that "PKK equals YPG" to their foreign counterparts, especially the U.S., Akar said that they insistently demand that all support being given to terrorists be cut off.

"There is no hesitation that the PKK is equal to YPG. In fact, the terrorist ringleaders themselves openly admitted in the press that the so-called commanders in Syria had previously taken part in the PKK ranks. Also, in the hearings held in the U.S. Senate, some experts state that the U.S. relationship with the YPG should be terminated. As a result, we are determined to save our noble nation from the scourge of terrorism that has plagued it for 40 years. Our only target is terrorists. Our operations will continue with determination until the last terrorist is eliminated."

The U.S. primarily partnered with the YPG in northeastern Syria in its fight against the Daesh terrorist group. On the other hand, Turkey strongly opposed the YPG's presence in northern Syria. Ankara has long objected to the U.S. support for the YPG, a group that poses a threat to Turkey and that terrorizes local people, destroying their homes and forcing them to flee.