Irregular migration is nothing new: Afghan envoy in Turkey 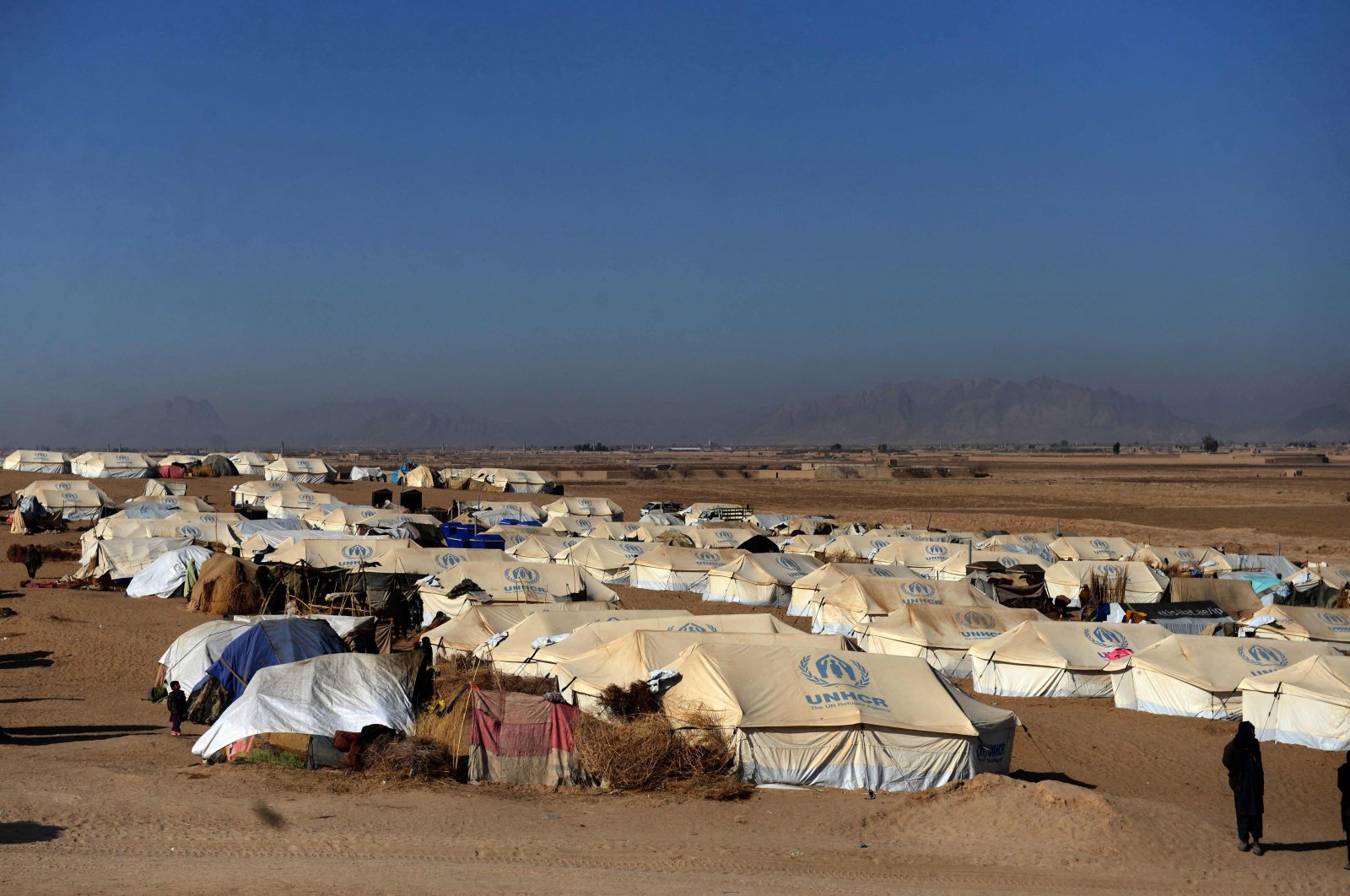 Tents at a camp for internally displaced families in the Dand district of Kandahar province on January 7, 2021. (AFP Photo)
by DAILY SABAH Aug 12, 2021 4:29 pm
RECOMMENDED

Irregular migration is not a new phenomenon, Afghanistan's ambassador to Ankara said Thursday, adding that they are working with Turkish authorities over the issue.

Addressing reporters in the embassy, Amir Mohammad Ramin evaluated the issues of Afghan migrants and Turkey's ongoing talks over the security and operation of the Kabul Hamid Karzai International Airport following the withdrawal of United States-led NATO troops from Afghanistan.

"We see criticism in the media. We completely understand this. However, irregular migration is nothing new. We are in close contact with the Turkish authorities, asking local authorities to identify illegal arrivals so that we can send them back," he said regarding the migration issue.

Ramin attributes the arrival of especially young and male Afghans to two main reasons: "One of the reasons is economic, they also go to Iran, Pakistan. They work in agriculture during the summer season and return in the winter. The second reason is that in Afghanistan, families want them to go until the situation is stable, otherwise, the Taliban want them to fight."

Noting that Afghanistan, as well as the region, is currently going through a "very critical time," Ramin said the negotiations between the Afghan government and Taliban "has not met the expectations of the people of Afghanistan as well as the government" because the primary objective of negotiations was to reduce violence and to achieve a comprehensive countrywide cease-fire.

"On the contrary, unfortunately, we see a spike and increase in the violence," he said, adding the displacement of thousands of people triggered a new flow of migrants to the neighboring countries.

Citing the latest "influx of migrants" from Afghanistan to Turkey, the Afghan envoy urged the international community to push for a cease-fire in his country.

"This particular migration is not something new," Ramin said, adding that Afghan authorities for a long time "have very close cooperation with high-level Turkish authorities to ensure that all the concerns are addressed."

He said that they have asked relevant Turkish authorities to identify those Afghan nationals that may have caused trouble or any harm to bilateral relations and be sent back to Afghanistan.

Ramin also made a "humble plea and request" to Turkish political parties regarding the issue, saying that his country is "in a very difficult time."

Stressing that "Turkey has put a lot of measures along the border," he said that the latest influx of irregular migrants is due to violence by the Taliban.

The envoy said a huge number of Afghan men have actually left for Pakistan, Tajikistan, Uzbekistan, and Iran.

He said there are millions of Afghans staying in Pakistan and Iran, adding this figure in Turkey for 2020 is 200,000 and that many of them are formal migrants, including residents and those who have made investments.

Turkey is not a motel for migrants, President Recep Tayyip Erdoğan said late Wednesday and added that the country is taking the necessary steps against a possible crisis of irregular migration due to the situation in Afghanistan.

In a live interview with private broadcasters CNN Turk and Kanal D, Erdoğan underlined that Turkey is not a roadside inn, adding that, considering all matters, “we will take steps accordingly.”

The Turkish president also denied that there was a flow of irregular migrants across Turkey's borders, as it is currently being "exaggerated on social media."

Concerns have risen over a possible spike in migrants from Afghanistan due to the U.S. pullout from that country after two decades and the following surge of Taliban attacks.

The Taliban have rapidly captured several smaller administrative districts, and are now targeting towns and cities. They have captured nine provincial capitals from government forces over the course of six days.

Ramin also underlined that Turkey has been playing a major role in the security of the Kabul airport for a long time and added that Turkey's airport security mission will not be a military mission, but only a mission to contribute to stability and peace.

He stressed that the peace and stability of "Afghanistan has close links to the economic development of the region, including preventing the influx of migration to all our neighboring countries and the region, especially Turkey."

"This is a peace mission. This is in support of peace and stability," he said, adding that Turkey's extended mission at the airport "will continue to have the support of the government of Afghanistan, as well as the support of the other NATO members, especially the United States."

Ramin said that there are "five security layers" as part of the mission.

"Four of them will be handled by the Afghan security forces, and then Turkey will be inside the actual airport. And obviously, the air defense will make sure that there are also security measures in place for civilian use of the airport," he added.

Commenting on Erdoğan's statement that he will meet with the Taliban, Ramin said: "I have listened to the president's statements. We are pleased with the position Turkey has taken in Afghanistan. We would appreciate any support at any level for Afghanistan's stability."

Erdoğan said late Wednesday that he could meet with the leader of the Taliban as part of efforts to end the fighting in Afghanistan. The Turkish authorities are working to set up talks with the Taliban, he added.

While the U.S.-led NATO troops are ready to completely withdraw from the war-torn country, Turkey, whose forces in Afghanistan have always been comprised of noncombatant troops, has offered to guard and run Kabul’s airport after NATO troops withdraw.

Ankara has been holding talks with Washington on logistic and financial support for the mission, as questions remain on how security will be assured along major transport routes and at the airport.

In exchange, Erdoğan has asked for financial, logistical and diplomatic conditions to be met.

The Turkish Foreign Ministry has also called for a fair burden-sharing of the task given that the “uninterrupted, safe operation of the airport is indispensable for the continued presence of diplomatic missions in Afghanistan.”