Turkey is not stopover for migrants, Erdoğan says 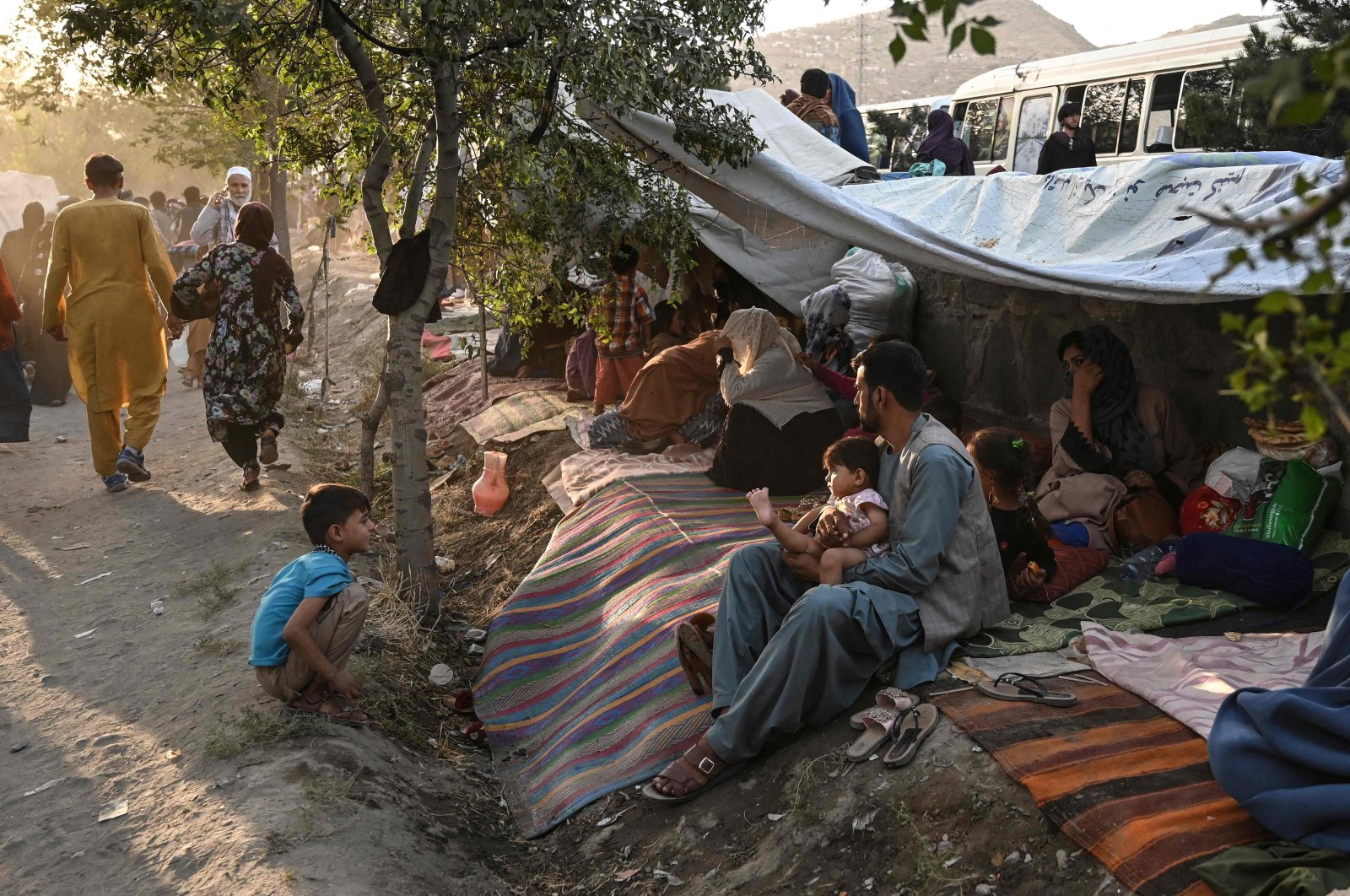 Internally displaced Afghan families, who fled from Kunduz, Takhar and Baghlan province due to battles between Taliban and Afghan security forces, sit in front of their temporary tents at Sara-e-Shamali in Kabul, Afghanistan on Aug. 11, 2021. (AFP Photo)
by DAILY SABAH Aug 12, 2021 11:46 am
RECOMMENDED

Turkey is not a motel for migrants, President Recep Tayyip Erdoğan said late Wednesday and added that the country is taking the necessary steps against a possible crisis of irregular migration due to the situation in Afghanistan.

In a live interview with private broadcasters CNN Turk and Kanal D, Erdoğan underlined that Turkey is not a roadside inn, adding that considering all matters “we will take steps accordingly.”

The Turkish president also denied that there was a flow of irregular migrants across Turkey's borders, as it is currently being "exaggerated on social media."

Referring to irregular migrants from Afghanistan, Erdoğan also said in the interview that Turkey is building walls along its borders with both Iran and Iraq.

"The walls being built there are to prevent these irregular migrants from entering our country," he outlined.

Stating that 505,375 foreigners were prevented from illegally entering the country on Turkey's eastern and southern borders in 2020, Erdoğan said, "we are a country that has achieved this."

Pointing out that this figure is around 253,300 in 2021, Erdoğan said: "We have achieved this as well. A significant portion of the captured Afghan irregular migrants are deported back to Afghanistan by our authorized institutions."

Erdoğan noted that, within the scope of physical security measures, a security wall was built on 156 kilometers (97 miles) of the Iranian border, with 85 kilometers of wall work currently ongoing and a 109-kilometer section equipped with a lighting system.

Noting that camera and sensor systems have been installed for 79 kilometers of the wall, Erdoğan said that irregular migration movements are constantly monitored with camera systems.

Turkey has deployed additional reinforcements to its eastern border with Iran and new measures are expected to be applied. The border security will be supported by technological systems.

As recently announced, to ensure the safety and security of the Turkish-Iranian border, a 295-kilometer long wall will be constructed along the entire shared border. It is hoped that the wall will help prevent illegal crossings, the trafficking of contraband and that it will also hinder terrorists from infiltrating the country.

Most recently, Greek Migration Minister Notis Mitarachi said Wednesday that the European Union is not ready to handle a repeat of the migration crisis in 2015 and must try to keep people from fleeing the growing conflict in Afghanistan, underlining that the bloc should offer more support to Turkey.

Many EU member states are worried that the developments in Afghanistan could trigger a replay of Europe's migration crisis in 2015 when more than a million people – most of them Syrians, Afghans and Iraqis – arrived in Europe seeking refuge.

On the other hand, Turkey underlines that it will not bear the burden of the migration crises experienced as a result of the decisions of third countries.

Turkey hosts nearly 4 million refugees – more than any country in the world. After the Syrian civil war broke out in 2011, Turkey adopted an "open-door policy" for people fleeing the conflict, granting them "temporary protection" status.

Speaking on border security and the flow of migrants, Defense Minister Hulusi Akar also said Thursday that Turkey’s borders are under control as further precautions have been taken.

He added that border security is not comprised of only one line, but also includes measures behind the border at checkpoints as well as city centers.

Some circles in Turkey have been fuelling anti-refugee sentiment recently as news of a new Afghan migrant wave has increased, making the issue of migration once again fair game for political discussions.

Most recently, a crowd of locals attacked shops and homes belonging to Syrians in the Turkish capital Ankara’s Altındağ district overnight in the wake of a street fight that led to a Turkish youth being fatally stabbed.

The trouble occurred after a fight between Turkish and Syrian youths on Tuesday. It was reported said one Turkish youth had died and one was wounded. Two foreigners have been charged and remanded in custody over the death of the youth.

"The demonstrations and events that took place in our Altındağ district this evening have come to an end as a result of the composure of our citizens and the hard work of our security forces," the Ankara governor's office said on Wednesday night.

"Our people are kindly requested not to give credence to provocative news and posts," it said in reference to the fight that provoked the unrest.

Commenting on the incident, the ruling Justice and Development Party (AK Party) spokesperson Ömer Çelik said on Twitter: “Some provocations are being tried to be organized over this very sad event. The aim of these provocations is to harm our country and our people.”

“Crime is individual. Criminals will be held accountable before justice and receive the punishment they deserve,” he added.