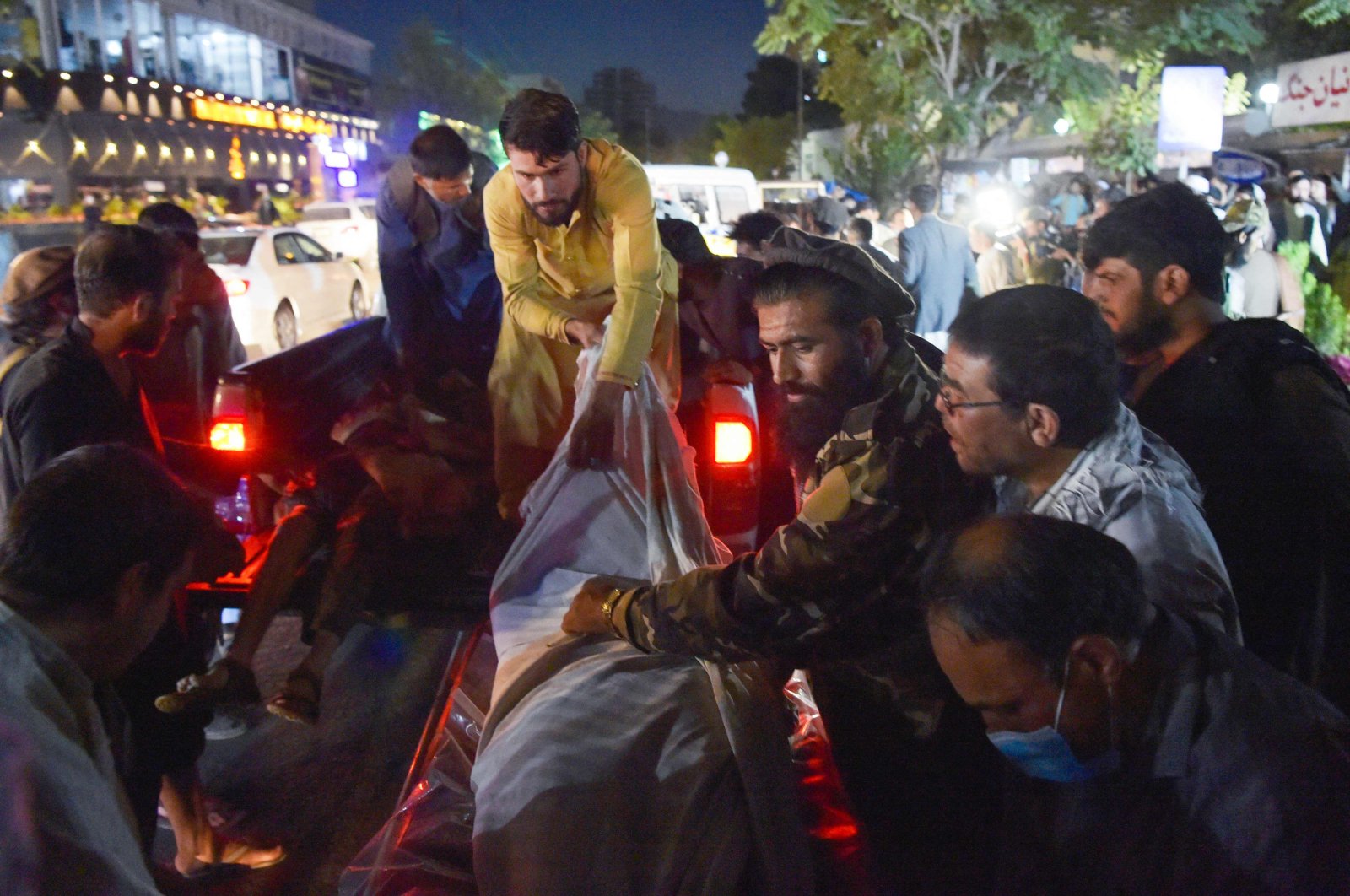 Volunteers and medical staff unload bodies from a pickup truck outside a hospital after two powerful explosions, which killed at least six people, outside the airport in Kabul, Afghanistan, Aug. 26, 2021. (Photo by Wakil KOHSAR via AFP)
by agencies Aug 26, 2021 7:28 pm
RECOMMENDED

Twin explosions at Kabul Hamid Karzai International Airport on Thursday ignited "total panic" in the large crowd of Afghans who had gathered in hope of catching flights out of the country following the Taliban's recent takeover.

Wounded men in blood-soaked clothes were ferried away from the scene in wheelbarrows after the blasts, while a boy clutched the arm of a man with a head injury, in images posted on social media.

"Bodies, flesh and people were thrown into a canal nearby," Milad, who was at the scene of the first blast, told Agence France-Presse (AFP).

"When people heard the explosion there was total panic. The Taliban then started firing in the air to disperse the crowd at the gate," a second witness said. "I saw a man rushing with an injured baby in his hands."

In the confusion, he said he dropped the documents he hoped would help him board a flight with his wife and three children.

"I will never ever want to go (to the airport) again. Death to America, its evacuation and visas."

Western intelligence agencies had warned Thursday of an imminent attack, with U.S. President Joe Biden citing a terrorist threat from the regional chapter of the Daesh terrorist group.

There are just five days until the deadline set by the United States to end the airlifts.

The two devices were detonated as the sun started to set, killing at least six people and wounding many more, according to the Emergency Hospital in Kabul.

Thick smoke billowed into the sky as men, women and children rushed away from the scene.

The Pentagon said one explosion was at the Abbey Gate of Kabul airport, and at least one more blast hit the nearby Baron Hotel.

Shortly after, an AFP photographer saw several bodies arriving at a Kabul hospital, and more than a dozen injured.

Even for a city as used to violent death as Kabul, the scenes after twin blasts tore through crowds thronging outside the airport in hope of evacuation were apocalyptic.

For one man, a former employee of an international development group with a U.S. special immigrant visa, the day began early.

He joined thousands of people around the airport hoping to clear the gates and get onto one of the flights ferrying in and out in the final days of the airlift.

He had been in the queue near the airport's Abbey Gate for around 10 hours when, at around 5 p.m., a powerful explosion went off.

"It was as if someone pulled the ground from under my feet; for a moment I thought my eardrums were blasted and I lost my sense of hearing," the man told Reuters.

"I saw bodies and body parts flying in the air like a tornado taking plastic bags ... into the air. I saw bodies, body parts, elderly and injured men, women and children scattered in the blast site.

"It is not possible to see doomsday in this life, but today I saw doomsday, I witnessed it with my own eyes."

The man did not wish to be identified, because in a city now under Taliban rule, many associated with the former Western-backed government and civil society groups that grew up around it fear reprisals.

The Taliban have sought to reassure Afghans that they would respect their rights and were not out for revenge.

Kabul has endured frequent suicide attacks in the 20 years since the Taliban were first driven from power, and the city's residents have grown used to police and security teams sealing off the blast sites and carrying away the dead and wounded.

Today, as the wounded were helped away or carried off in wheelbarrows, it was shocked survivors who were left to stumble over the bloodstained corpses of dozens flung by the blast into a sewage ditch.

"Today there was no one to handle the issue and move the bodies and the wounded to hospital or take them out of sight of the public," the witness said.

"Dead bodies and wounded were lying in the road and in the sewage canal. The little water flowing into it had turned into blood.

"Physically, I am OK ... but I don't think the mental wound and the shock I sustained from today's blast will ever let me live a normal life."