Ray of hope peeks through border as Turkish, Armenian envoys to meet 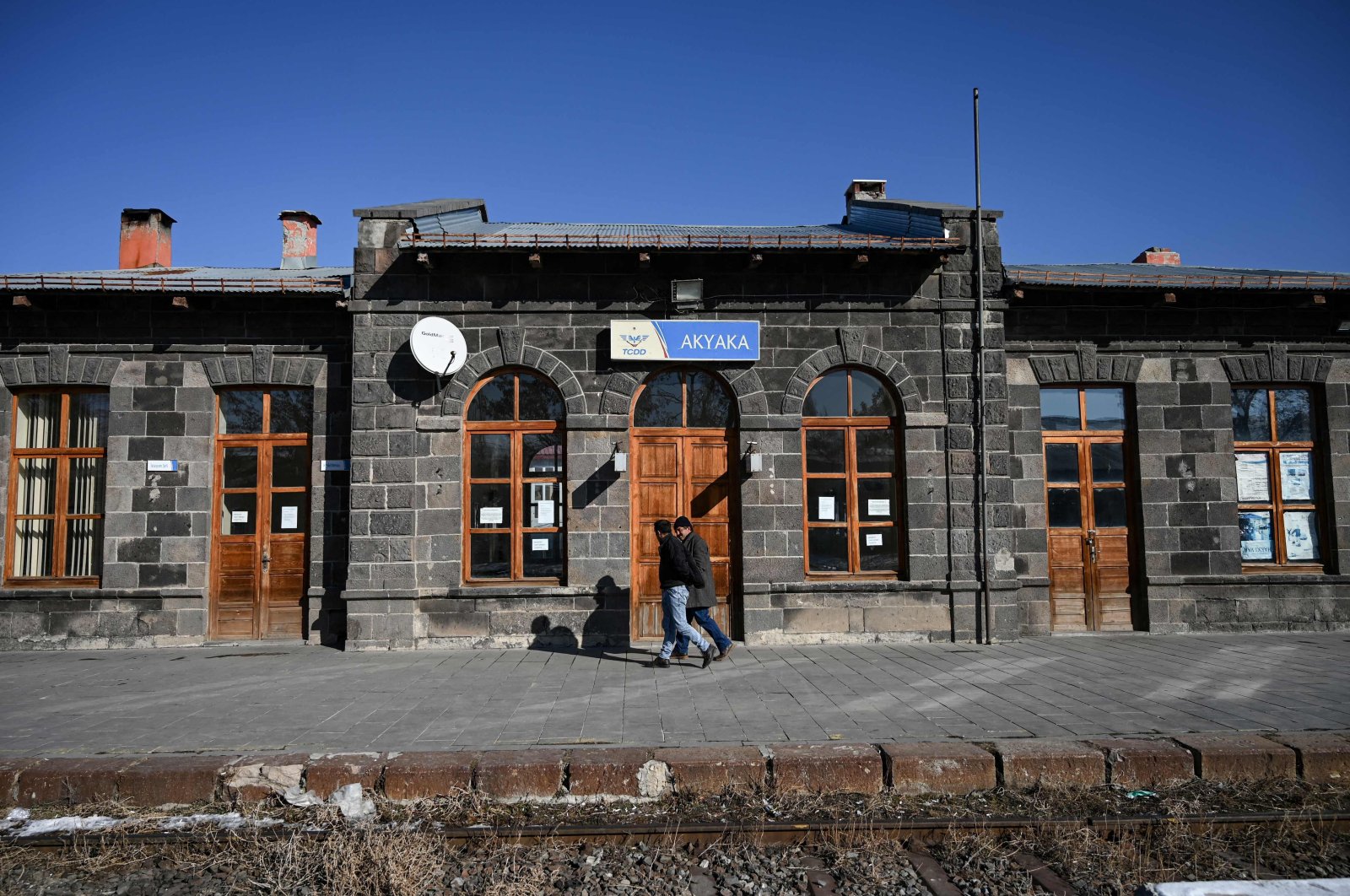 Two men walk in front of Akyaka train station on Jan. 9, 2022, in Akyaka district of Kars city, eastern Turkey, near the Turkish-Armenian border. (Photo by Ozan KOSE / AFP)
by Daily Sabah with AFP Jan 13, 2022 11:43 am
RECOMMENDED

A rare ray of hope is shining across the snow-capped mountains towering over Turkey's northeastern edge, as the first direct contact in years between Turkish and Armenian envoys is set to take place in Moscow on Friday in an attempt to mend the bilateral ties shuttered for three decades due to a history of bloody feuds.

For the locals of the Turkish frontier town of Akyaka in the northeastern border province Kars, these talks could not have come soon enough.

"Since the border was shut in 1993, our region has become the country's blind spot, locked on all sides," said Engin Yıldırım, director of the Akyaka traders' association.

"The border is our only window to the world."

Despite being neighbors, Turkey and Armenia have seen many difficulties in their diplomatic relations since Yerevan’s declaration of independence in 1991.

The two countries have long been divided by a range of issues – from Armenia’s refusal to recognize their shared border to its occupation of Nagorno-Karabakh and the 1915 events between the Ottoman Empire and Armenians.

Turkey was one of the first countries to recognize Armenia’s independence on Sept. 21, 1991, after the collapse of the Soviet Union.

However, the Soviet Union's chaotic breakup in 1991 set off a wave of regional conflicts, sparking an all-out war between Armenians and Azerbaijanis over the disputed region of Nagorno-Karabakh, which was internationally recognized as Azerbaijani territory but occupied by Armenia for nearly three decades.

Armenia's victory prompted Turkey to seal the border in 1993 in support of its allies in Baku.

Locals now refer to the Akyaka train stop, built out of black basalt, as the "station of nostalgia" – a memory of the days when trains crisscrossed in both directions, bringing the scenic region tourism and trade.

"In 1991, people would flock to both sides of the border to meet up," Vedat Akçayöz, a local historian, recalled of the year when the Soviet Union fell.

"For two years, it was all the rage."

Since then, the second war over Nagorno-Karabakh in 2020 saw Azerbaijan reverse most of its losses and Armenia agree to a Russian-brokered truce.

The regional mood has been improving ever since and bilateral relations have gained a new dimension toward normalization recently.

President Recep Tayyip Erdoğan said in October last year that he saw "no obstacle" to normalizing ties with Armenia if Yerevan also maintained "goodwill" with Baku.

Addressing Azerbaijan’s parliament on Jan 16, 2021, Erdoğan said peace and stability in the Caucasus will benefit the entire world, not just countries of the region.

"The opening of Turkey’s borders to Armenia will bring innumerable benefits to the country,” he added.

Ankara and Armenia then appointed special envoys for the talks. Last month, Yerevan decided to lift an embargo on Turkish goods it imposed over the Second Karabakh War.

In their first meeting, the envoys will exchange views on a roadmap for moving forward, including confidence-building measures.

Armenia expects to establish diplomatic relations with Turkey and to open borders between the two countries as a result of dialogue, Russia's TASS news agency cited Armenia's Foreign Ministry as saying on Thursday.

Yıldırım said the locals are closely following the diplomatic moves.

"Our government is in favor of reopening the border and I believe the Armenians are too," he said.

The remote region's shop owners recall a time when Armenians would come across the border and gobble up their goods.

"We did a brisk business with the Armenians," said Huseyin Kanık, a shop owner in the nearby province of Kars, which specializes in various types of cheese.

In the Soviet era, "they would arrive with furs and samovars and returned with our products ... We are soon going back to those days," he said with joyful hope.

In front of his 19th-century hotel, which once housed the elite of Tsarist Russia, Gaffar Demir also bet on peace, saying the current state of affairs made no sense.

"We have a road, a railroad, but no relations with the Armenians," he complained.

The local "Karabağ" hotel recalls the hostilities imperiling lasting peace, but Akçayöz prefers to point to the region's multicultural foundation, which besides Turks and Armenians includes Georgians, Azerbaijanis, Kurds and other ethnic groups.

"For everyone, it is time to live in peace," he said.

Relations between Armenia and Turkey have historically been complicated. Turkey objects to the presentation of the 1915 incidents as "genocide" but describes the events as a tragedy in which both sides suffered casualties.

Turkey's position on the events of 1915 is that Armenians lost their lives in eastern Anatolia after some sided with the invading Russians and revolted against the Ottoman forces. The subsequent relocation of Armenians resulted in heavy casualties, as massacres carried out by militaries and militia groups from both sides increased the death toll.

Ankara has repeatedly proposed the creation of a joint commission consisting of historians from Turkey and Armenia and international experts to tackle the issue.

"We were taught to be hostile toward Armenians. In Kars, 'Armenian' was used as an insult," said former Kars mayor Naif Alibeyoğlu, who has always backed a rapprochement with Armenia – especially when the last attempt was made in 2008.

"There may be some fanatical elements, but there's no animosity between our peoples," he argued.

"We look alike, we laugh and we cry about the same things," added his brother Alican, who founded the local broadcaster Serhat TV.

"I am sure the date for the border's reopening has already been set," he said, a Russian flag flying over a border crossing a few miles away, where Moscow has set up a base in support of its Armenian ally.

Russia recently announced that it supports talks between Turkey and Armenia to normalize ties, stressing that “the whole world will benefit from this reestablishment of neighborly relations.”

The move is seen as part of an effort to end tensions in the Caucasus region. It is also part of Turkey’s efforts to reconcile with a number of countries it has fallen out with, including Egypt, the United Arab Emirates (UAE) and Saudi Arabia.