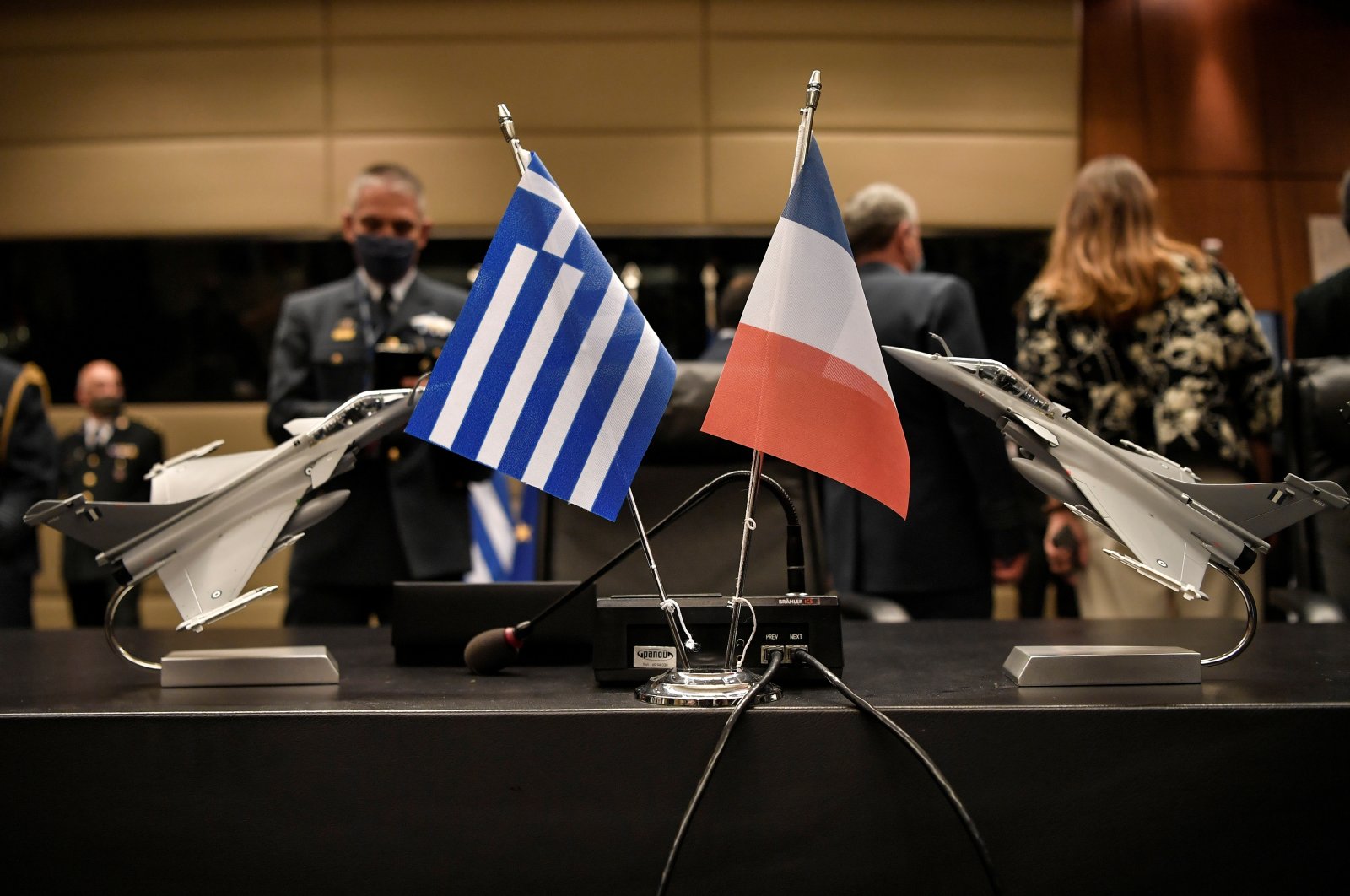 Models of Rafale jets are seen next to Greek and French national flags before the signing of an agreement for the purchase of 18 Dassault-made Rafale fighter jets at the Greek Defence Ministry in Athens, Greece, January 25, 2021. (Reuters Photo)
by DAILY SABAH Jul 27, 2021 11:20 am

As Greece maintains its unconstructive stance in problems related to Turkey, Defense Minister Hulusi Akar reiterated his call for peace and dialogue

Turkey expects its neighbor Greece to adopt peaceful political solutions rather than aggressive ones, Defense Minister Hulusi Akar stated Tuesday, underlining that secondhand French Rafale jets will not change the power balance in the region.

Speaking on Athens’ recent purchase of French Rafale jets, Akar said: “They have been engaging in an arms race. They buy jets, arms, equipment. It is not possible to change the power balance with a few secondhand jets.”

Akar was making statements on security and defense issues and touched upon Greece’s increasing arms spending.

Delivery of the 18 Rafale jets – 12 currently in service in France and six new planes to be built by Dassault Aviation – is scheduled to begin midyear and to be completed over two years. The jets and the purchase of compatible air-to-air Meteor missiles are expected to cost 2.3 billion euros ($3.4 billion).

“We always tell our Greek neighbors that we defend finding political solutions to problems through peace and dialogue within the framework of agreements,” Akar reiterated, criticizing Athens’ violation of agreements that obligate a demilitarized status of the Aegean islands.

He stated that Greece is militarizing these islands under the pretext of threats. “There are no threats. Turkey is not in an aggressive position toward Greece.”

Akar reminded that both sides have been holding talks to decrease tensions and find solutions to common problems.

Akar also reiterated that Turkey, which has the longest continental coastline in the Eastern Mediterranean, rejects the maritime boundary claims of Greece and the Greek Cypriot administration, stressing that these excessive claims violate the sovereign rights of both Turkey and the Turkish Cypriots.

He vowed to protect the rights of Turkey and those of the Turkish Cypriots.

“Everyone should know that we will not allow any fait accomplis.”

The defense minister also spoke on the Cyprus issue, saying that a solution is not possible through the ways that have been tried for the past 50 years.

“There is no meaning in losing time once again at the point we are now.”

“Turkey and the Turkish Republic of Northern Cyprus gave their decision. Sovereign, independent, two equal states. Everyone has to digest this,” he added.

He also pointed to the importance of equal sharing of hydrocarbon sources in the Eastern Mediterranean.

The island of Cyprus has been mired in a decadeslong struggle between Turkish Cypriots and Greek Cypriots, despite a series of diplomatic efforts by the United Nations to achieve a comprehensive settlement.

The island has been divided since 1964 when ethnic attacks forced Turkish Cypriots to withdraw into enclaves for their safety. In 1974, a Greek Cypriot coup aiming at Greece's annexation of the island led to Turkey's military intervention as a guarantor power. The TRNC was founded in 1983.