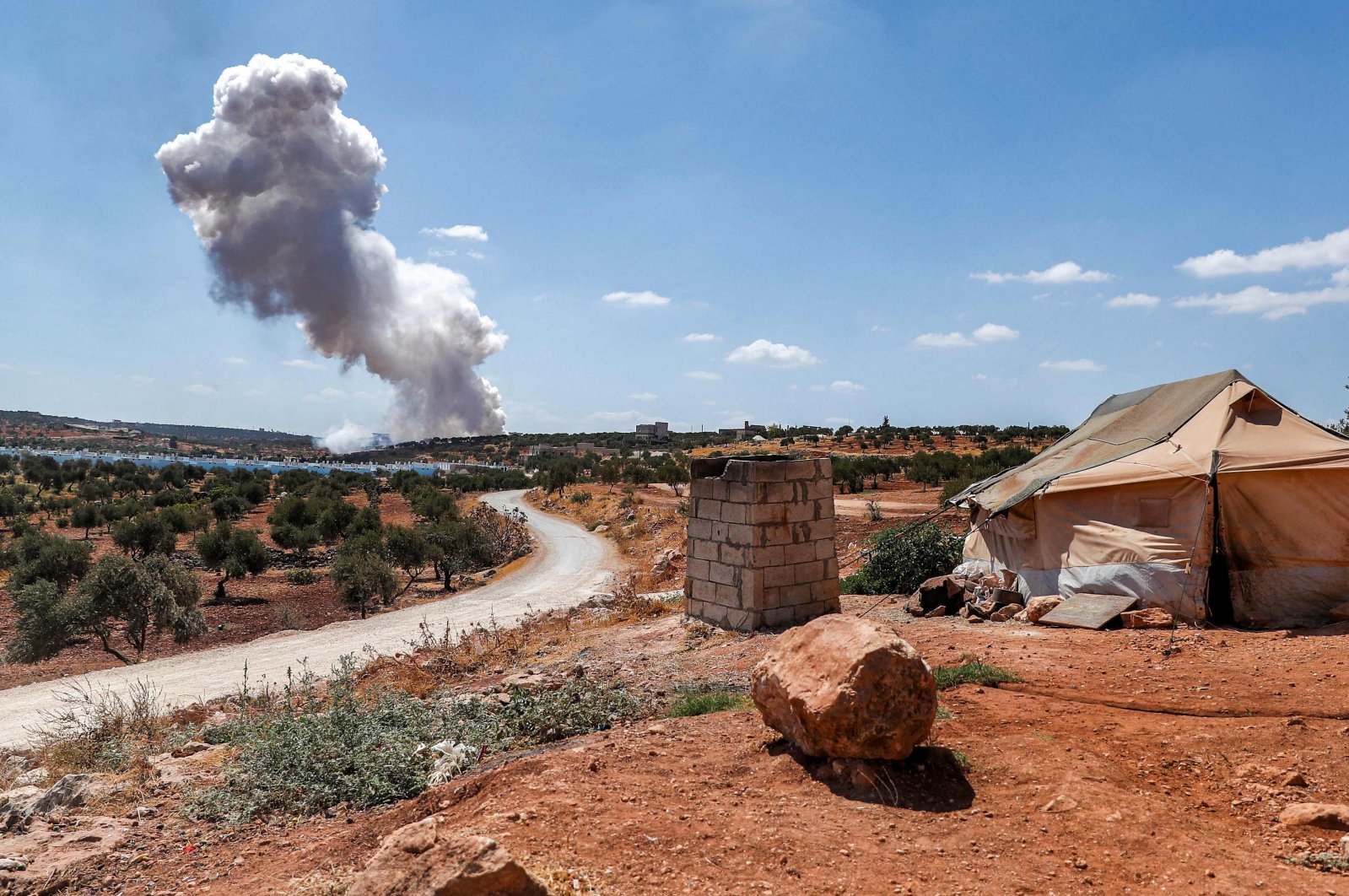 A plume of smoke rises after an aerial bombardment near a make-shift camp for displaced Syrians near the town of Kafraya in the north of Syria's rebel-held Idlib province, Sept. 7, 2021. (Photo by OMAR HAJ KADOUR / AFP)
by DAILY SABAH WITH AA Sep 19, 2021 11:37 am
RECOMMENDED

Coalition for Syrian Revolutionary and Opposition Forces (SMDK) head Salim al-Muslat on Saturday criticized the international community for focusing solely on humanitarian issues and not showing the necessary interest in the political solution process in Syria, which has not progressed.

Al-Muslat, who was elected as the chairperson of the SMDK in the ordinary general assembly held in Istanbul on July 12, spoke to Anadolu Agency (AA) about the issues surrounding the work the Constitutional Committee is attempting to get done, the SMDK's efforts for the political process, the latest situation in Idlib, Bashar Assad's visit to Russia and the return of Syrians to their country.

Regarding the work of the Syrian Constitutional Committee, which has convened five times since Oct. 30, 2019, in Geneva, Switzerland, within the scope of the political solution process, al-Muslat said that the talks ended in failure due to the intransigent attitude and frivolity of the Assad regime.

Highlighting that they met with the United Nations envoy for Syria, Geir Pedersen, in Istanbul on Sept. 14, al-Muslat said: "Pedersen has not yet announced a date for the new round of talks of the Constitutional Committee and we will wait and see what it will do."

Al-Muslat drew attention to the fact that the drafting of the constitution has yet to begin, although it has been almost two years since the start of constitutional studies. "No progress can be made due to the delays of the regime. International delegations and Pedersen need to act more seriously on this issue," he said. "The international community has focused on humanitarian issues rather than the political solution needed by the Syrian people."

He stressed that the international community should stand by the Syrian people, adding that the SMDK's activities contribute to the political solution process.

"In this process, we had meetings with many international organizations. As SMDK, we visited many circles related to the Syrian issue. As a matter of fact, we met with Turkish Foreign Minister Mevlüt Çavuşoğlu a few days ago (on Sept. 9). In addition, we had meetings with officials from other countries," he said.

Underlining that they attach great importance to a political solution to the civil war that has continued since March 2011, al-Muslat said: "We will have a visit to New York in the coming days before the sessions of the U.N. General Assembly. We will have meetings with U.N. Secretary-General Antonio Guterres and officials from other countries. Our pain is great and there is no room for compliments anymore. We need to move forward in the political process, which is a strategic choice for us. We see a recession in countries that need to act and take responsibility, we don't want to achieve something and go back."

Stating that they are still engaged in talks in Syrian territory, al-Muslat said: "Although our headquarters is abroad, we also have centers in Syria. We want to be partners in decision-making. This means that we are meeting with people intensively, listening to them and working to end their suffering."

Al-Muslat stated that SMDK institutions are going to great lengths to meet the needs of civilians in Syria – in areas under the control of the opposition.

Underlining that the Syrian Interim Government doing all it can to confront the COVID-19 pandemic, al-Muslat said: "Brother Turkey has never withheld its support from us. The burden has become heavy. Turkey has always stood by us in the field of education, health and security."

Touching on the Syrians in Turkey, al-Muslat said: "Since the beginning of the revolution, the words we heard from our Turkish brothers and their honorable stance ... have never changed."

Stressing that everybody is in favor of voluntarily returning to the country, al-Muslat said: "All Syrians want to return to their country if a safe environment is maintained in Syria. No one returns to die or be detained. We have to obey the laws in the countries we are in. We must respect the rules of settlement and not act against them, and no one will do any harm to those who abide by them."​​

'Russia has no respect for deals'

Referring to the situation in Idlib, al-Muslat noted that the Assad regime and its supporter Russia continue to violate the cease-fire agreement reached in March 2020.

"There is an agreement between Turkey and Russia in Idlib. However, we have been witnessing the violations of Russia and the regime by targeting civilians for months. Russia does not respect any agreement. This is a sensitive subject. There are some violations every day, but the National Army components are ready and on the alert," he said.

In the report published by the Syrian Network for Human Rights (SNHR) on Sept. 9, it reported that the regime and Russia have launched intense attacks on the south of Idlib since June 5. It was announced that a total of 61 civilians, including 33 children and 12 women, lost their lives in the bombardments by Russian and regime forces from June 5 to Sept. 1.

Regarding the visit of Bashar Assad, the leader of the regime in Syria, to Moscow on Sept. 14, al-Muslat said: "The troubles we went through are because of Russia, Iran and the regime. We don't know the content of the visit, but maybe there is something on the horizon because there are talks going on between the U.S. and Russia in Geneva. We can't predict anything, we have to see some things."