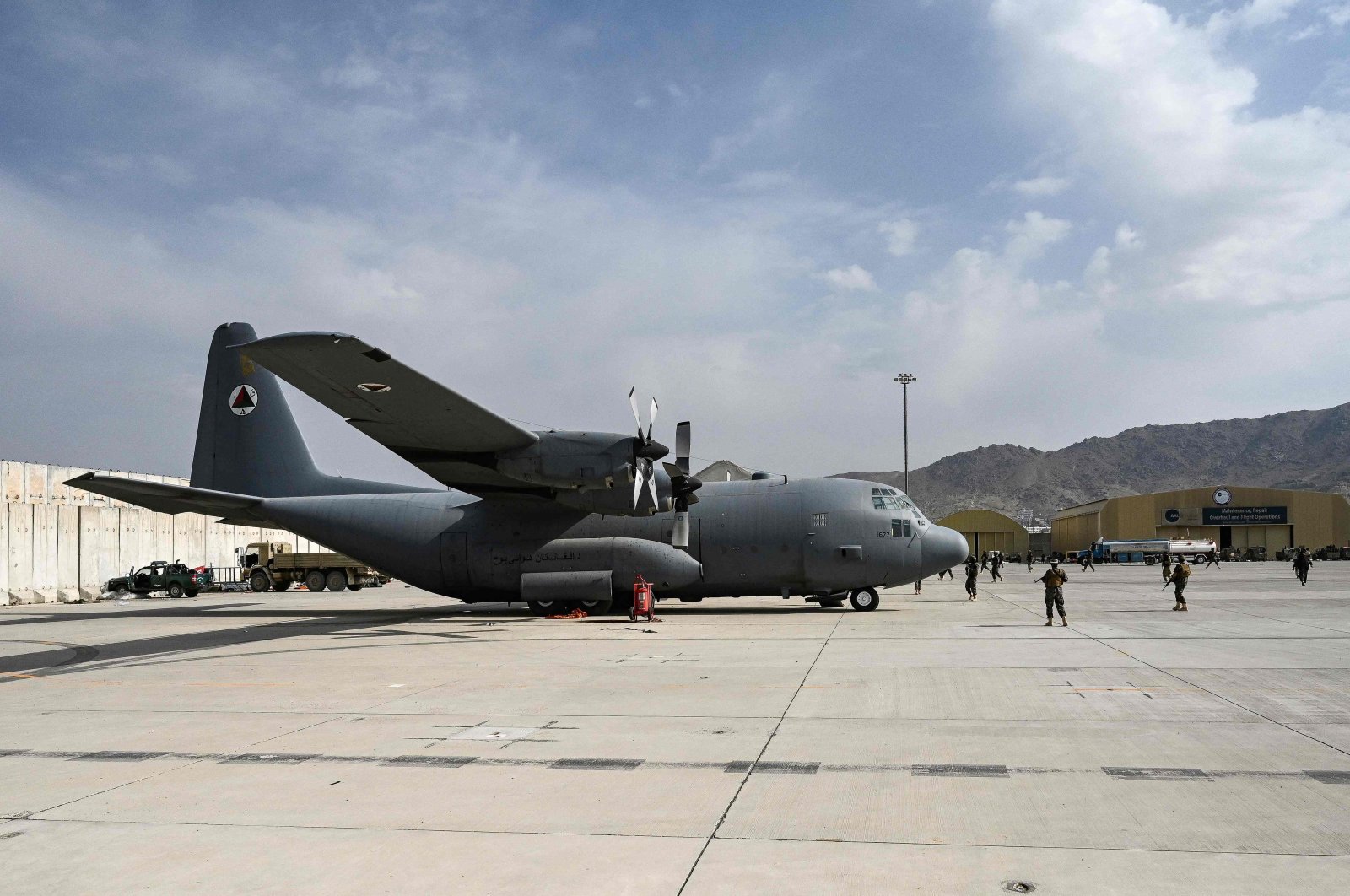 Taliban Badri special force fighters stand guard next to an Afghan Air Force aircraft at the airport in Kabul, Afghanistan, Aug. 31, 2021, after the U.S. pulled all its troops out of the country to end a brutal 20-year war. (AFP Photo)
by DAILY SABAH WITH AGENCIES
Aug 31, 2021 9:31 am

The Taliban are in talks with Qatar and Turkey about the management of Kabul Hamid Karzai International Airport, French Foreign Minister Jean-Yves Le Drian said Tuesday, adding that an agreement to secure the airport should be hammered out as soon as possible so that people who want to leave Afghanistan can do so using commercial flights.

"The Security Council resolution about securing the airport must be implemented. There are talks under way with the Qataris and Turks about management of the airport. We must demand that access to the airport is safe," Le Drian said on France 2 television.

Le Drian also said that France must continue to put pressure on the Taliban, but he then emphasized that his country is not negotiating with them.

With the Taliban in possession of Kabul's airport after the United States completed its withdrawal on Tuesday, the focus will now shift from the mammoth Western evacuation operation seen in the past two weeks to the group's plans for the transport hub.

The symbolism of the airport was underlined Tuesday when the Taliban's top spokesperson stood on its runway and declared victory over the United States. But what happens next remains unclear.

A suicide bombing – claimed by Daesh’s Afghanistan-Pakistan chapter – struck one of the main gates, killing more than 100 people, including 13 U.S. troops.

On Monday, rockets were fired towards the airport, which the Taliban said were intercepted by the airport's missile defense systems.

After the Taliban seized power, the United States took control of the airport to manage the evacuation of tens of thousands of people with the help of military contingents from other countries.

Within this scope, Turkey Friday completed the evacuation of all Turkish personnel and all Turkish citizens who wished to leave Afghanistan, in less than 48 hours. The evacuation was completed days before the Taliban’s Aug. 31 deadline for foreign forces to leave the country.

"Our fighters and special forces are capable of controlling the airport and we do not need anyone's help for the security and administrative control of the Kabul airport," Taliban spokesperson Bilal Karimi told Agence France-Presse (AFP) on Monday.

"Let's say you took over the security but how would we explain to the world if another bloodbath takes place there?" he asked.

With thousands of skilled workers believed to have fled the country – despite Taliban pleas for them to stay – questions remain over whether there will be enough trained workers left in the Afghan capital.

Foreign Minister Mevlüt Çavuşoğlu on Sunday said that ensuring the security of Kabul airport was an extremely important issue and that they were carefully considering options regarding the Taliban’s proposal.

Çavuşoğlu said, however, that inspection reports show that runways, towers and terminals, including those in the civilian side of the airport, were damaged and needed to be repaired.

As well as the passenger halls, critical infrastructure has been destroyed, including air traffic control terminals, which will need to be replaced for commercial flights to run again.

On the plus side, the two-week mass evacuation campaign has shown that the airport's runways are at least operational, if in poor condition.

The Taliban have insisted they want to keep the civilian airport open, but without guarantees over security, commercial airlines simply won't operate out of Kabul.

Qatar played an outsized role in U.S. efforts to evacuate tens of thousands of people from Afghanistan. Now the tiny Gulf Arab state is being asked to help shape what is next for Afghanistan because of its ties with both Washington and the Taliban, who are in charge in Kabul.

Qatar is also in talks about providing civilian technical assistance to the Taliban at Kabul's international airport. Qatar said its main priority is restoring regular operations while preserving safety and security at the airport facilities.

Qatar's role was somewhat unexpected. The nation, which shares a land border with Saudi Arabia and a vast underwater gas field in the Persian Gulf with Iran, was supposed to be a transit point for just a few thousand people airlifted from Afghanistan over a timeline of several months.

After the surprisingly swift Taliban takeover of Kabul on Aug. 15, the United States looked to Qatar to help shoulder the evacuations of tens of thousands in a chaotic and hurried airlift.

In the end, nearly 40% of all evacuees were moved out via Qatar, winning its leadership heaps of praise from Washington. International media outlets also leaned on Qatar for their own staff evacuations. The United States said Saturday that 113,500 people had been evacuated from Afghanistan since Aug. 14. Qatar says a little more than 43,000 had transited through the country.

Qatar’s role in the evacuations reflects its position as host of the Middle East’s largest U.S. military base, but also its decision years ago to host the Taliban’s political leadership in exile, giving it some sway with the militant group. Qatar also hosted U.S.-Taliban peace talks.

Assistant Qatari Foreign Minister Lolwa al-Khater acknowledged the political gains scored by Qatar in the past weeks but rebuffed any suggestion that Qatar's efforts were purely strategic.

“If anyone assumes that it’s only about political gains, believe me, there are ways to do PR that are way easier than risking our people there on the ground, way easier than us having sleepless nights literally for the past two weeks, way less complicated than spending our time looking after every kid and every pregnant woman," she told The Associated Press (AP).