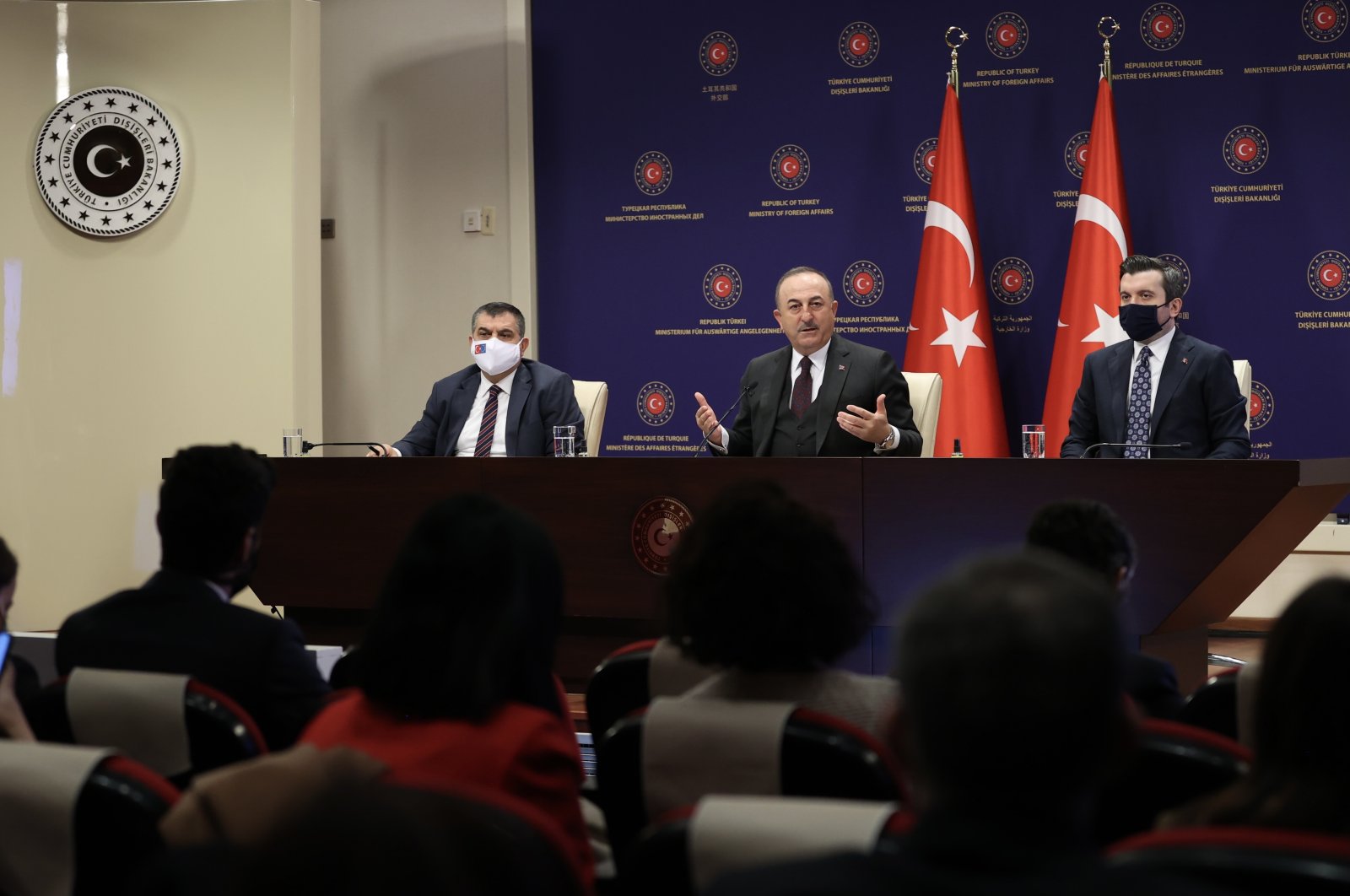 Within the scope of promoting regional stability and cooperation, Foreign Minister Mevlüt Çavuşoğlu highlighted that Turkey aims to normalize relations with Armenia if positive dialogue and steps continue to move forward

Turkey and Armenia will engage in their first talks in Moscow, Foreign Minister Mevlüt Çavuşoğlu told reporters at an annual evaluation meeting in the capital Ankara on Monday.

Noting that the two sides have appointed special representatives, the foreign minister said Ankara wants to have direct contact with Yerevan before the official meeting.

“A road map outlining which steps need to be taken to normalize relations needs to be determined by getting in direct contact, including bilateral visits,” Çavuşoğlu said.

Çavuşoğlu underlined that Turkey is coordinating with Azerbaijan regarding steps to be taken with Armenia and said: “I hope Armenia continues on this line. Armenia’s messages are positive, but we want to see actions. We can take trilateral steps.”

“Both Azerbaijan and Turkey may open their borders with Armenia if we reach the point we want,” he added, saying that such a decision would be made in cooperation with Baku.

Following years of frozen ties, the neighboring countries of Turkey and Armenia have announced they seek to normalize relations amid efforts for regional integration and cooperation in the South Caucasus.

Turkey appointed its former ambassador to the United States, Serdar Kılıç, as special envoy to lead normalization discussions with Armenia

Çavuşoğlu also touched upon the 3+3 regional platform aiming to increase cooperation in the South Caucasus. “Today a new process has started. Within the scope of this process, new steps have to be taken for normalization. This will be important for Caucasia’s stability, peace and welfare."

Participants voiced that the recent 2+3 meeting in Russia was beneficial, Çavuşoğlu said and underlined that transport corridors are highly important for Armenia as well as Azerbaijan, which would gain a direct connection to Nakhchivan.

The next meeting is planned to be held in Turkey.

Baku and Ankara have actively pressed for the reopening of a historic land link uniting Azerbaijan with its exclave of Nakhchivan and further on to Turkey via Armenia's Syunik province, as stipulated in last November's cease-fire agreement.

Speaking on the newly appointed ambassador to Turkey, Jeff Flake, and Turkey-U.S. relations, Çavuşoğlu said that a sole ambassador cannot affect relations to a large extent.

“We know that the new ambassador is not very anti-Turkey,” he said, adding, however, the envoy recently adopted a negative stance toward Ankara in the U.S. Congress to earn a vote of confidence.

Ankara and Washington disagree on a number of issues that have further strained bilateral ties in recent years, from Turkey’s purchase of Russian S-400 missile defense systems to the U.S. support of the PKK terrorist group's Syrian branch, the YPG, as well as the U.S. refusal to extradite Fetullah Gülen, the leader of the Gülenist Terror Group (FETÖ), among other legal matters.

“What we expect from ambassadors, especially after the 10 ambassadors’ recent absurd mistake, is that their definition of duty and their limits are clear – if they work to enhance our bilateral relations, we will give them all kinds of support.”

“We will not allow them to come and act as if they are Turkey’s governor.”

“We want to cooperate closely with the new ambassador to further U.S.-Turkey relations,” he highlighted, saying that he hoped the ambassador would have a similar understanding.

Kavala has been imprisoned for four years now over his alleged role in the 2013 Gezi Park protests and subsequent riots. However, Kavala denies the charges.

The Foreign Ministry summoned the ambassadors of the 10 countries, accusing them of meddling in the Turkish judiciary, while President Recep Tayyip Erdoğan announced he had instructed Foreign Minister Mevlüt Çavuşoğlu to declare the ambassadors as persona non grata. However, the embassies took a step back, preventing the crisis from escalating further.

The diplomatic spat was resolved after the U.S. and several of the other countries issued statements saying they respected the United Nations convention stipulating that diplomats avoid interfering in the host country's domestic affairs.

Turkey has carried out around 67-68 of the criteria for visa liberalization with the European Union, Turkey’s top diplomat stressed and added: “The EU, as with other issues, did not keep its promise.”

The disagreements are rooted in a few choices of words, he elaborated, saying that these matters were previously discussed but that the bloc is evading such meetings currently “since they know these are trivial matters.”

Visa liberalization was designed so Turkish citizens with biometric passports would be able to enter Europe's "Schengen area" for stays of up to 90 days within a 180-day period without requiring a visa.

According to the deal, Turkey was promised a total of 6 billion euros ($7.30 billion) in financial aid. It was initially designed to be given to the country in two stages and to be used by the Turkish government to finance projects for Syrian migrants. Visa freedom for Turkish citizens was also part of the agreement. In addition, the EU-Turkey Customs Union was to be updated.

In exchange for these promises, Turkey took responsibility for discouraging migration through the Aegean Sea by taking stricter measures against human traffickers and improving the conditions of Syrian migrants living in Turkey.

On another note, Çavuşoğlu urged Moscow and the Western defense alliance to air their differences in direct negotiations proposed by NATO chief Jens Stoltenberg.

Russia wants NATO to provide Moscow with a binding security guarantee and withdraw its forces to positions they held before a wave of eastward expansion that began after the Soviet Union's collapse.

"For any proposal to be accepted, it should be acceptable by both sides. Russia made some proposals. But maybe NATO seeks the same kind of guarantees from Russia. This is not a one-sided issue," Çavuşoğlu said.

"If the requests are maximalist – I'm not saying that Russia is maximalist in any case – both sides must be constructive," he said. "They should come to the table with proposals that both sides can accept."

A NATO spokesperson said the Brussels-based alliance had been "in touch" with Moscow about holding a meeting of the NATO-Russia Council on Jan. 12.

Russia has not yet formally accepted the offer.

"If Russia has any certain specific expectation or issue from Turkey regarding reducing tensions between Russia and NATO, Turkey will evaluate this positively because our objective is clear," said Çavuşoğlu.

"Everyone would be affected, God forbid, by conflict in the region."

NATO member Turkey has good ties with Moscow, though it opposes Russian policies in Syria and Libya. It has forged energy and defense cooperation with Russia while opposing Russia's 2014 annexation of Ukraine's Crimean Peninsula.