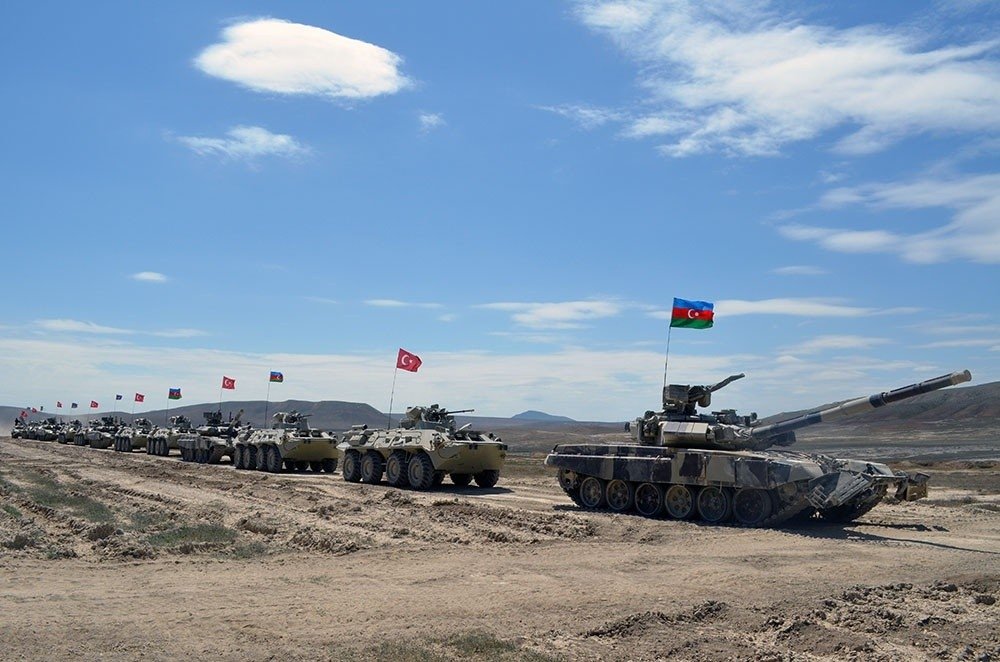 Turkish and Azerbaijani tanks participate in the joint military drill in Azerbaijan, June 28, 2021. (IHA Photo)
by DAILY SABAH WITH AGENCIES Jun 28, 2021 11:49 am
RECOMMENDED

The Turkish and Azerbaijani militaries have started joint drills in Baku, Azerbaijan's Defense Ministry said in a statement on Monday.

The two countries deployed tanks, helicopters and drones in the drills in an effort to improve the two countries' combat interoperability, the ministry said.

The drill aims to enhance the interaction of the two militaries during combat operations and develop the decision-making and managing skills of commanders.

Some 600 soldiers, 40 tanks and armored vehicles, 20 cannons, seven war helicopters, unmanned aerial vehicles and 50 other vehicles are taking part in the drills.

The drills are expected to continue until June 30.

Photographs released by the Azerbaijani Defense Ministry showed a column of armored personnel carriers and tanks from the two countries advancing on flat arid terrain.

"The main purpose of the exercises...is to improve the interaction between the two countries' army units during combat operations, to develop the commanders' military decision-making skills and their ability to manage military units," the ministry said.

During his presidency, President Recep Tayyip Erdoğan has visited Azerbaijan more than 20 times, while the delegation visits have reached more than 100.

The Kremlin said earlier this month it was closely monitoring developments around a potential Turkish military base in Azerbaijan, a move it said could require Russia to take steps to ensure its own security and interests.

Kremlin spokesperson Dmitry Peskov said Russia was in close contact with Turkey, a NATO member, on stabilizing the situation in the southern Caucasus, where fighting last year saw the Azerbaijani army liberate its territories from three decades of Armenian occupation.

The southern Caucasus, part of the former Soviet Union, is of special interest to Russia, which has traditionally regarded it as its own sphere of influence. Russian peacekeeping troops are garrisoned in Nagorno-Karabakh after last year's conflict, and Moscow has a military base in neighboring Armenia.

Erdoğan and Russian President Vladimir Putin last week exchanged views on the situation concerning the Nagorno-Karabakh region that Azerbaijan liberated last year from decades of Armenian occupation. They made a positive assessment of the efforts of a joint Russian-Turkish center monitoring the resulting cease-fire in the region, the Kremlin statement said.