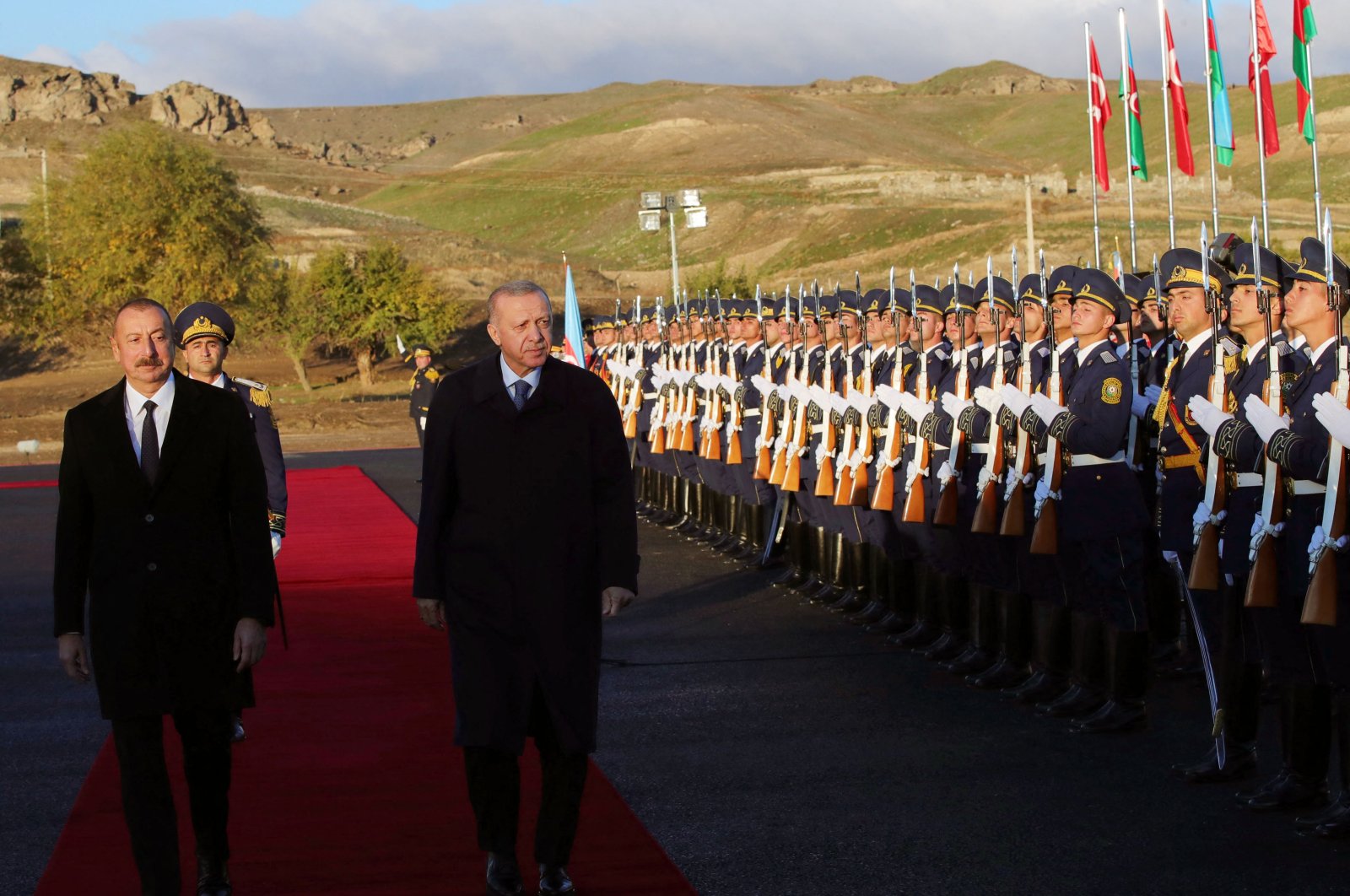 Azerbaijan's ambassador to Turkey on Thursday stated that the two countries always support one another as he pointed to their current cooperation in all fields.

Speaking to Anadolu Agency (AA), Rashad Mammadov highlighted the fact that the Turkish people celebrated Azerbaijan's independence as much as the Azerbaijani people.

"Azerbaijan and Turkey have always provided mutual support to each other, the two peoples saw each other's cause as their own," he said.

"When our lands were under the occupation of Armenia, Turkey considered our rights cause as its own and supported Azerbaijan without hesitation in all platforms to end the occupation."

The relationship is based on a stable foundation that allows it to progress towards the goals set by the presidents of the two states, he said. "In the last 30 years, Azerbaijan-Turkey relations have always developed with the rising dynamics, have been above the classical understanding of interstate cooperation and have been a unique example in the world. Today, Azerbaijan-Turkey relations are carried out jointly in all fields."

Mammadov said that the mutual visits by the two leaders have become a tradition, emphasizing that "every visit of President (Recep Tayyip) Erdoğan to Azerbaijan in the last year has been of a historical nature."

Explaining that Erdoğan's visits to Baku in December 2020 and to Shusha in June this year were met with great enthusiasm in Azerbaijan, Mammadov said the Turkish president attending the opening of Fuzuli International Airport on Oct. 26 sent a strong message. "It showed the whole world how fast the founding works went and what kind of results the Azerbaijan-Turkey cooperation had in our lands that were occupied by Armenia for nearly 30 years, were completely dispersed, mined and liberated last year. The opening of Fuzuli International Airport, which is the first air gate of the liberated regions, demonstrated what the two states were capable of in an eight-month period."

Calling Fuzuli International Airport the "first air gate" in the regions liberated from occupation, and one of the first projects for peace and regional development, Mammadov said the airport is already an important point between the east and west, but it will become even more important with the opening of the Zangezur corridor.

Stating that they expect the airport to "contribute to the tourism potential of the regions devastated by Armenia," Mammadov said: "This airport will also play an important role for foreign tourists to visit Shusha, the cultural capital of Azerbaijan."

On the opening of the Zangezur corridor, which will unite the western provinces of Azerbaijan and the Nakhchivan enclave, Mammadov pointed to the three-sided declaration signed on Nov. 10, 2020, that ended the war and underlined that Armenia has made a commitment to open the corridor. He said that developments have been made in this direction in the last year and assured that the passage through Zangilan in the Eastern Zangezur region will open and thus "unite the whole Turkish world."

"The Zangezur corridor will also provide new alternatives to international transportation from Europe to Asia and back, and will contribute to the development of the states in the region, namely Armenia. This project will be a complement to other similar projects in the region, not a competitor."

The Nagorno-Karabakh region, which is internationally recognized as Azerbaijani territory, was liberated last year through a deal following a 44-day war with Armenia and has since entered a period of economic revival thanks to new transportation lines. According to the deal, all transportation lines that were closed due to the Karabakh issue are to reopen. During this period, the Zangezur corridor, which was mentioned by Azerbaijani President Ilham Aliyev several times, came to the forefront.

Zangezur was part of Azerbaijan, but in the 1920s, the Soviets gave the region to Armenia. After this move, Azerbaijan lost its link with Nakhchivan and some parts of the railway between the two countries were destroyed. Azerbaijan has focused on projects in the Zangezur corridor, which will include highways and rail lines stretching across territories in Armenia's Syunik region. Once those parts are repaired, Azerbaijan will be able to reach Iran, Armenia and Nakhchivan uninterruptedly by train. The railway will also link Turkey with Russia through Azerbaijan.

Mammadov stated that the cooperation between Turkey and Azerbaijan makes a significant contribution to regional and global security, peace, development and stability, underlining that the two countries are at the forefront of the fight against global terrorism.

Stating that the energy projects implemented with the cooperation of Turkey and Azerbaijan help bolster Europe's energy security and supply, Mammadov said: "The Baku-Tbilisi-Ceyhan oil pipeline and Southern Gas Corridor projects that we have realized together in this regard will bring the hydrocarbons of the Caspian Sea to the world and Europe has created an opportunity for the export of their reserves."

Mammadov also drew attention to the steps taken by the two countries in the field of global transportation, noting that thanks to the Baku-Tbilisi-Kars railway, cargo sent from China can be transported to Europe and beyond in a short span of time, passing through Azerbaijan and Turkey.

Expressing that the tripartite mechanisms developed under the leadership of Turkey and Azerbaijan have made a significant contribution to the economic development in the region through peaceful cooperation, Mammadov said: "After the homeland war, Azerbaijan and Turkey took their experience of successful tripartite platforms further and presented the 3+3 platform to Armenia, which has been conducting an invading policy against Azerbaijan for nearly 30 years."

Regarding the Shusha Declaration, Mammadov said that Azerbaijan and Turkey have officially become allies.

On June 15, Turkey and Azerbaijan signed the Shusha Declaration, a pact that focuses on defense cooperation and establishing new transportation routes. Erdoğan and Aliyev met in the historic city of Shusha, which was liberated last fall from nearly 30 years of Armenian occupation. The declaration affirms joint efforts by the two armies in the face of foreign threats and the restructuring and modernization of their armed forces.

Relations between the former Soviet republics of Armenia and Azerbaijan have been tense since 1991, when the Armenian military occupied Nagorno-Karabakh, a territory internationally recognized as part of Azerbaijan, and seven adjacent regions. The latest large-scale clashes erupted in the Karabakh region on Sept. 27, 2020, when the Armenian Army launched attacks on civilians and Azerbaijani forces, violating several humanitarian cease-fire agreements. Azerbaijan then launched a counteroffensive operation, later dubbed "Iron Fist," which led to the 44-day conflict ending with the liberation of Azerbaijani lands. During the conflict, Azerbaijan liberated several cities and 300 settlements and villages that were occupied by Armenia for almost 30 years. Prior to that, about 20% of Azerbaijan's territory was under illegal occupation.

On Nov. 8, Azerbaijan celebrated Victory Day on the first anniversary of the liberation of Shusha, the pearl of Karabakh, which played a crucial role in the fate of the Patriotic War. Shusha, Azerbaijan's cultural and historical capital, was liberated after 28 years thanks to the army, mostly special forces teams, as heavy weapons and ammunition could not enter the city due to its geographic and natural features. Azerbaijani forces entered Shusha, which is surrounded by mountainous terrain and located on the top of a rock, and destroyed the Armenian Army in a close-up battle using just light weapons. The Armenian leadership had no choice but to accept Azerbaijan's terms and withdraw from the occupied lands in the following days.

On Nov. 10, 2020, the two countries signed a Russian-brokered agreement to end the fighting and start working toward a comprehensive resolution of the dispute. Two months later, the leaders of Russia, Azerbaijan and Armenia signed a pact to develop economic ties and infrastructure to benefit the entire region. It also included the establishment of a trilateral working group on Karabakh. A joint Turkish-Russian center was also established to monitor the postwar truce.