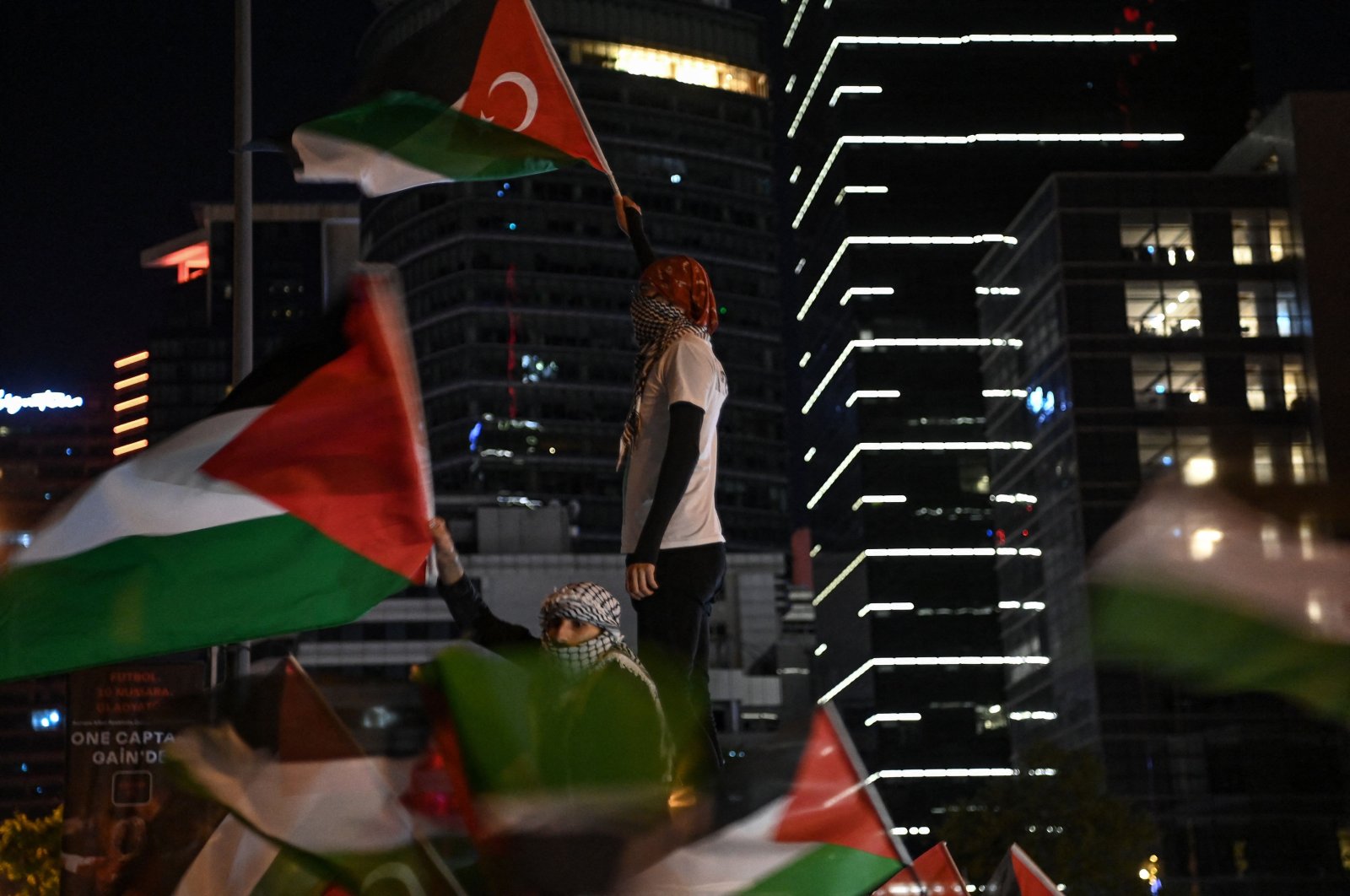 Protesters hold Palestinian and Turkish national flags and chant slogans during a protest against Israel in front of the Israeli Consulate in Istanbul on May 9, 2021. (AFP Photo)
by Daily Sabah with Agencies May 10, 2021 11:32 pm
RECOMMENDED

Turkish authorities have intensified diplomatic efforts to put an end to Israeli aggression against the Palestinians as President Recep Tayyip Erdoğan held phone calls with the leaders of Jordan and Kuwait.

A statement from the Presidency said Erdoğan told Abdullah and Al Sabah that Turkey, Jordan and Kuwait should work together to defuse tensions.

According to the statement, Erdoğan underlined that all Muslims around the globe are targeted by Israel's "inhumane" attacks against the Al-Aqsa Mosque.

According to a statement from the Ministry of Foreign Affairs, Çavuşoğlu discussed steps to mobilize the international community, including the United Nations, and to set up a committee on Jerusalem within the OIC.

Earlier on the same day, diplomatic sources also confirmed to Daily Sabah that Turkey will intensify diplomacy for Palestine with members of the OIC, will bring Israeli attacks to the table in the United Nations Security Council meeting, and hold meetings with world leaders and members of the UNSC.

An Israeli airstrike killed 20 people in northern Gaza, the Strip's Health Ministry said in a statement earlier on the same day. The Ministry added that nine children were among the victims in the Gaza Strip.

While the official did not give details about how the people were killed or injured, there were reports circulating of Israeli attacks on Palestinians in the Gaza Strip.

Hundreds of Palestinian protesters were injured in renewed attacks by the Israeli police in the occupied East Jerusalem holy site, the Al-Aqsa Mosque Monday after days of raids and attacks against peaceful worshippers during the month of Ramadan.

Fifty of the injured were taken to hospitals, a medical source told Anadolu Agency Monday.

The continuation of Israeli security forces attacks follow high tensions since last week in the Sheikh Jarrah area as Israeli settlers swarmed in after an Israeli court ordered the eviction of Palestinian families.

Earlier in the day, Palestinian groups shot rockets at Israeli locations in response to the continued Israeli aggression at the Al-Aqsa Mosque and the eviction of Palestinian families from the Sheikh Jarrah neighborhood in occupied East Jerusalem. The Israeli army reported that seven rockets were fired from Gaza toward western Jerusalem.