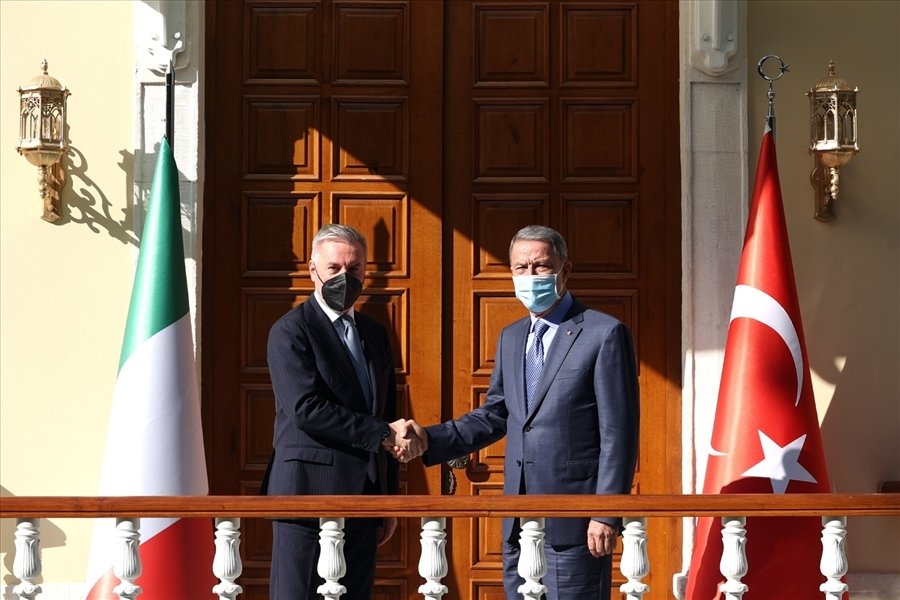 Defense Minister Hulusi Akar and his Italian counterpart Lorenzo Guerini on Tuesday discussed bilateral and regional security issues and the latest developments in Afghanistan, Libya and the Eastern Mediterranean.

The meeting between Akar and Guerini in Istanbul was constructive and positive, a statement by the Turkish defense ministry said, adding that Akar emphasized the common values and cooperation between Turkey and Italy, the southern wing of NATO and the two allied Mediterranean countries.

Turkey is in favor of solving problems in the Aegean and Eastern Mediterranean through international law, good neighborly relations and dialogue, it said, adding that it is determined to continue the struggle against all kinds of risks, threats and dangers, especially Daesh, the Gülenist Terror Group and PKK/YPG terrorist groups.

Highlighting the importance of developing cooperation in the defense industry between the two countries, Akar said Turkey continues to contribute to NATO without interruption despite the coronavirus pandemic.

Guerini, for his part, stated: “It was a pleasure to meet with my colleague Hulusi Akar again in Istanbul. We had an interesting dialogue about our shared determination under the missions of the United States, as well as on the stability and security of the enlarged Mediterranean and Libya.

“We had a positive exchange of views on the development of our relations and industrial cooperation,” he wrote on Twitter Tuesday.

Most recently, Foreign Minister Mevlüt Çavuşoğlu made a similar statement during his visit to Rome to participate in the anti-Daesh coalition meeting, stressing that cooperation between Turkey and Italy is vital for the region including the Eastern Mediterranean and Libya.

"Italy is our strategic partner and ally. Turkey has been on the side of Italy in its darkest days during the COVID-19 pandemic. Due to the recent developments and challenges in the Eastern Mediterranean, the cooperation between Turkey and Italy has become highly important for the region’s security and stability," Çavuşoğlu said, speaking to the Italian Il Messaggero newspaper.