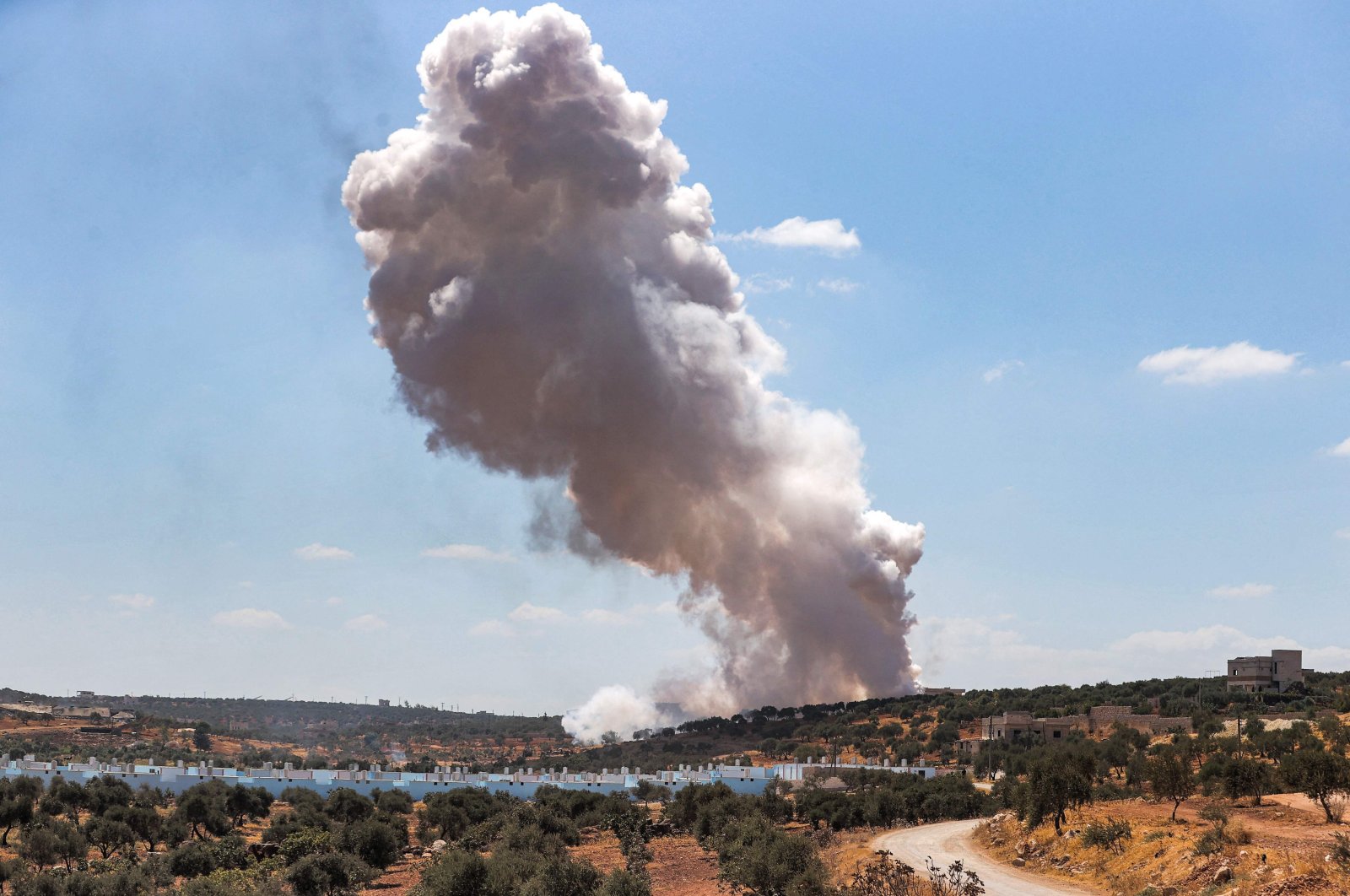 A smoke plume rising from aerial bombardment near a make-shift camp for displaced Syrians near the town of Kafraya in the north of Idlib province, northwestern Syria, Sept. 7, 2021. (AFP Photo)
by DAILY SABAH
Oct 03, 2021 1:39 pm

Turkey continues to fulfill its responsibilities in order to maintain the cease-fire and stability in northwestern Syria's Idlib region, the Defense Ministry said Sunday.

In a ministry briefing to reporters, questions about the latest situation in Idlib and the observation points of the Turkish Armed Forces (TSK) in the region following the recent Sochi meeting between President Recep Tayyip Erdoğan and his Russian counterpart Vladimir Putin were answered.

The ministry sources stated that Turkey is abiding by its obligations set forth in the previous deals to preserve the cease-fire and to provide peace and security in the region.

"There is no change in our observation points or our activities in the region," the sources stressed.

Ministry sources also drew attention to the fact that the number of Syrians returning to Idlib – where peace and security has been ensured after activities carried out following the agreement on March 2020 – is more than 400,000.

Asked whether the joint patrols between the Turkish Armed Forces and the Russian armed forces will resume, the ministry said, "Our coordinated work with the Russian Federation continues."

Putin and Erdoğan last week hailed their three-hour meeting in Sochi to discuss the Syrian conflict, describing the exchange as "useful" and "productive."

It was the two leaders' first face-to-face talks in 18 months. The Russian leader hosted Erdoğan at his Black Sea residence in the resort of Sochi after two weeks in self-isolation following a coronavirus outbreak among his aides.

The two men, who did not address reporters after the talks, had been expected to discuss northwestern Syria, where Assad regime troops and Moscow have ratcheted up airstrikes in recent weeks.

Earlier in the day, Erdoğan told Putin he believes there are great benefits in "Turkey and Russia nurturing stronger relations each passing day."

"Negotiations are sometimes difficult – but with a final positive result," Putin told Erdoğan.

He added that they "have learned to find compromises favorable to both parties."

In recent years, the two powers have clashed in particular over Syria, where Moscow and Ankara support opposing camps in the civil war.

The ministry also emphasized that the Turkish Armed Forces will continue to protect the rights and interests of both Turkey and the Turkish Republic of Northern Cyprus (TRNC) in the Aegean and Eastern Mediterranean, and will continue to be the guarantor of peace and security on the Island of Cyprus in line with international guarantees and alliance agreements.

"Despite all our calls within the framework of good neighborly relations, Greece continues its actions that violate the status of the demilitarized eastern Aegean islands in violation of international agreements. Since the beginning of 2021, it has committed 1,989 violations against the demilitarized status islands with its military sea and air vehicles," it added.

Greece has often been embroiled in tensions with neighboring Turkey over a range of issues, from competing claims over hydrocarbon resources in the Aegean to the demilitarization of islands. Its burgeoning arms program is designed to counter Turkey in the Eastern Mediterranean, against which France is among the few EU states to have offered public support in past months.