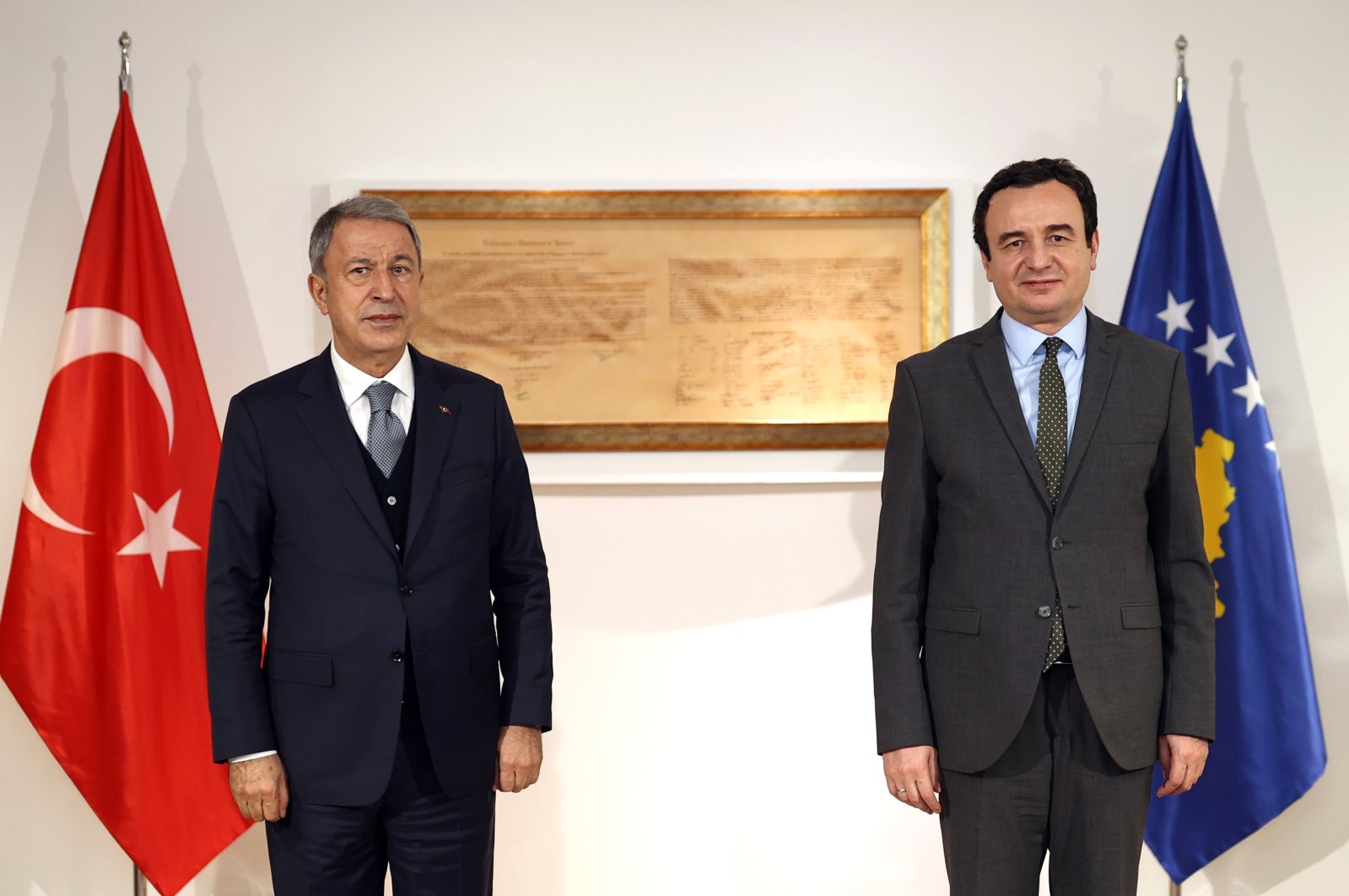 Cooperation between Turkey and Kosovo in defense, security and the defense industry is growing every day, Defense Minister Hulusi Akar said Tuesday.

During his visit to Kosovo, Akar was welcomed with a military ceremony by his counterpart Armend Mehaj in the capital Pristina.

After a face-to-face meeting, Akar and Mehaj held a joint press conference.

"We had an extremely comprehensive, constructive and positive meeting," Akar told reporters.

Akar said Turkey and Kosovo continue to cooperate in many areas, including economic and military-related issues.

Stressing the importance of the fight against the Gülenist Terror Group (FETÖ), the group behind the 2016 defeated coup in Turkey, Akar said: "This (group) may turn into a threat not only to our country but also to Kosovo."

Turkey has often stressed the international nature of the FETÖ terrorist threat.

FETÖ and its United States-based leader Fetullah Gülen orchestrated the defeated coup of July 15, 2016, which left 251 people dead and 2,734 injured.

In March 2018, in cooperation with Kosovo intelligence, Turkey's National Intelligence Organization (MIT) apprehended six men said to be in charge of moving FETÖ members out of Turkey to Europe and the U.S., alongside other illegal activities in the Balkans.

The Turkish defense minister also expressed "dissatisfaction" with Kosovo's move in March to open its embassy to Israel in Jerusalem.

Before his visit to Kosovo, Turkey's defense minister was awarded honorary Bosnia-Herzegovina citizenship during an official visit to Zenica on Tuesday.

Akar paid a visit to the EUFOR Task Force TAF Liaison and Monitoring Team House in Zenica to receive a briefing on the mission's activities.

After the visit, Akar met with families he had known in the city, where he served as a member of the Turkish Armed Forces (TSK) 25 years ago.

At the end of the meeting, Akar was presented with an honorary citizenship certificate by the speaker of the Zenica Doboj Canton Parliament.

On the occasion, Akar expressed gratitude to the city and stated that Zenica is very important to them since "we spent very important and meaningful days here."

Turkey is very supportive of Bosnia-Herzegovina, he said.

"We worked together willingly and intensively to improve social life and make daily life easier as soon as the cease-fire was signed in 1995," he said, referring to the Dayton Accords, which ended the Bosnian War.

"We put a lot of time and work into it," he remarked, adding that Bosnians' well-being is equally important to the Turkish people.

"Your happiness and security really concern us. We hope Bosnia-Herzegovina continues its development for stability and integrity. The people of Bosnia-Herzegovina as a whole deserve to live happily. You have the right to live in comfort and peace after the serious hardships experienced in the past. We will continue to work together," he vowed.

Later, Akar visited Zenica Turkish Park. He also had a souvenir photo taken in front of the Turkish Fountain, built by the Bosnia-Herzegovina Turkish Brigade Command in 1999, and a tree he had planted during his visit to the city in 2014.

Earlier in the day, Akar had said that Turkey is ready to act as a mediator on the political crisis in Bosnia-Herzegovina and will do what it can to ensure stability amid concerns over separatist moves by Bosnian Serb leader Milorad Dodik.

Bosnia-Herzegovina has seen a separatist push since Milorad Dodik, the Serb member of the country’s tripartite presidency, blasted legal changes banning the denial of genocide and glorifying war criminals. In a nonbinding motion paving the way for secession from Bosnia, Serb lawmakers earlier this month voted to start pulling their autonomous Serb Republic out of Bosnia's armed forces, tax system and judiciary.

Bosnia was split into two autonomous regions – the Serb Republic and the Federation, which is dominated by Bosniaks and Croats – after its 1992-1995 war. The three institutions represent the key pillars of joint security, the rule of law and the economic system.

Turkey has said the Serb lawmakers' vote was "wrong, dangerous" and could threaten regional stability. Germany has called on the European Union to sanction Dodik.

Dodik wants to roll back all reforms made after the war and return to the 1995 Constitution, under which the state was represented by basic institutions only while all powers belonged to the regions.

Bosnia's opposition leaders warned the moves may lead the Serb Republic into a new war, while some Bosnian Serbs voiced disquiet over Dodik's moves, fearing a relapse into chaos and even conflict as they struggle just to make ends meet. The steps have been internationally criticized for violating the 1995 Dayton Accords and undermining the country's Constitution.

Turkey has been taking diplomatic initiatives to de-escalate tensions in Bosnia-Herzegovina. In November, Erdoğan met with representatives from Bosnian nongovernmental organizations (NGOs) in Istanbul. "We have provided support without any discrimination for the preservation and stabilization of Bosnia-Herzegovina's multicultural and ethnic identity," he said.