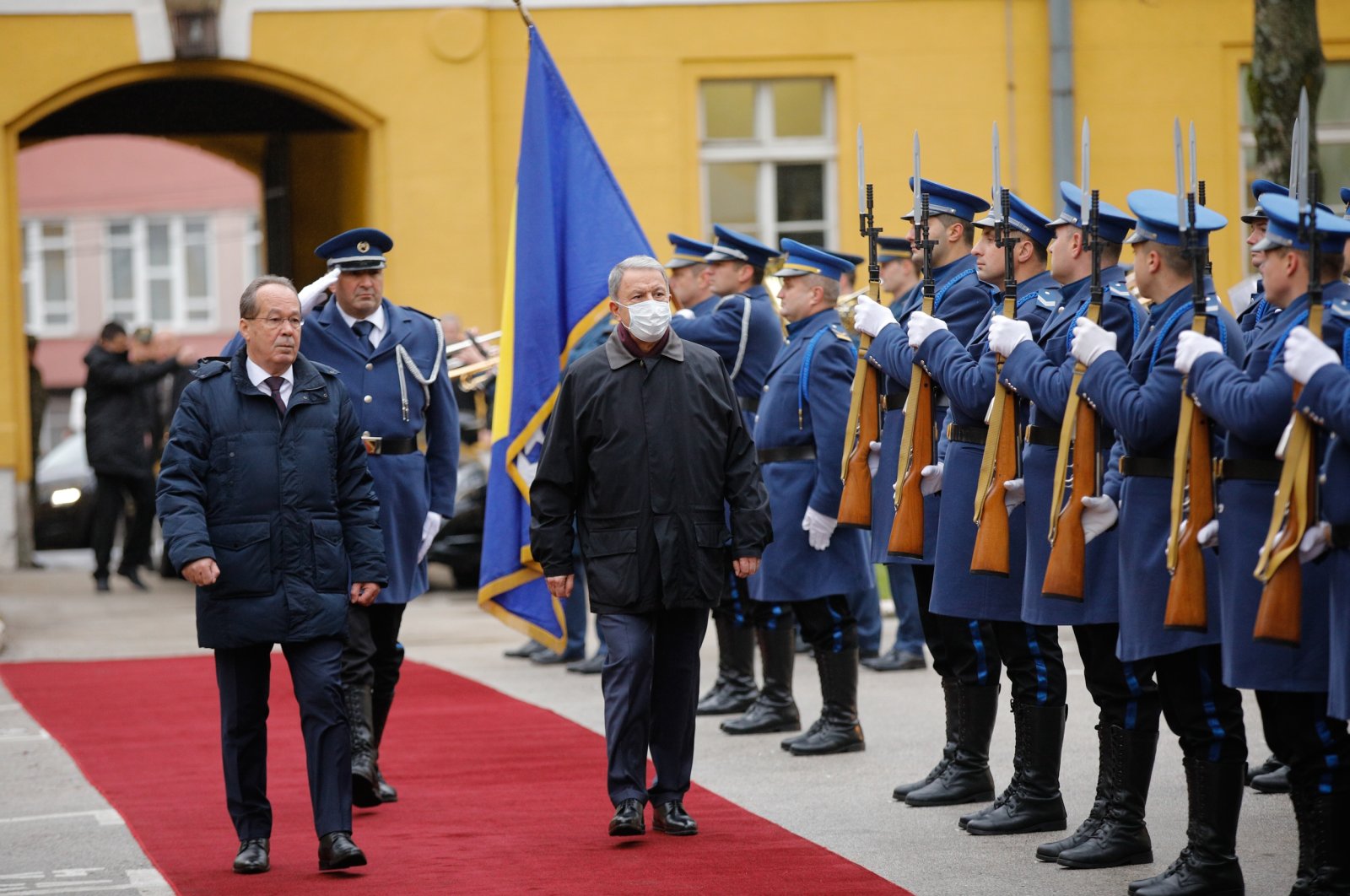 Turkey is ready to act as a mediator on the political crisis in Bosnia-Herzegovina and will do what it can to ensure stability, Defense Minister Hulusi Akar said on Tuesday, amid concerns over separatist moves by Bosnian Serb leader Milorad Dodik.

As part of a visit to Sarajevo this week, Akar met with his Bosnian counterpart, the Bosnian presidency and other officials, according to the Defense Ministry.

"We view Bosnia-Herzegovina as a whole. We have done all we can for its unity and stability, and we will continue to do so," Akar told reporters after his talks, referring to its Bosniak, Croat and Serb peoples making up one nation.

"If requested, Turkey can work as a mediator in Bosnia-Herzegovina," Akar said, without elaborating further.

The surge in separatist rhetoric in Bosnia-Herzegovina does not serve any party, Akar also said Monday during his visit to the country.

"We believe the separatist rhetoric in Bosnia-Herzegovina benefits no one,” he told a joint news conference with his Bosnian counterpart Sifet Podzic in the capital Sarajevo.

“We’re following the situation closely. We invite the relevant parties to think reasonably, sensibly and act prudently. Existing and potential problems can also be resolved through negotiations and peaceful means,” he said.

Stressing that Turkey is standing by to help, Akar further said, “I want you to know that we’re ready to do our part on every issue, including mediation, when requested.”

Podzic, for his part, said 89 members of the Armed Forces of Bosnia-Herzegovina are currently being trained in Turkey and that relations with Turkey are getting stronger and better each year.

"In addition to being a NATO member, the Republic of Turkey is a friendly country for Bosnia-Herzegovina," said Podzic.

Beginning his visit, Akar was welcomed with a military ceremony by Podzic at a parade guard. Akar later met with Lt. Gen. Senad Masovic, the chief of General Staff of Bosnia-Herzegovina.

Bosnia-Herzegovina has seen a separatist push since Milorad Dodik, the Serb member of the country’s tripartite presidency, blasted legal changes banning the denial of genocide and the glorification of war criminals. Dodik pushed for Republika Srpska's regional parliament to take separatist steps in the army, judiciary and tax systems if the changes are not reversed.

In a nonbinding motion paving the way for secession from Bosnia, Serb lawmakers earlier this month voted to start pulling their autonomous Serb Republic out of Bosnia's armed forces, tax system and judiciary.

Bosnia was split into two autonomous regions – the Serb Republic and the Federation, which is dominated by Bosniaks and Croats – after its 1992-1995 war. The three institutions represent the key pillars of joint security, rule of law and the economic system.

Turkey has said the Serb lawmakers' vote was "wrong, dangerous" and could threaten regional stability. Germany has called on the European Union to sanction Dodik.

Dodik wants to roll back all reforms made after the war and return to the 1995 constitution, under which the state was represented by basic institutions only while all powers belonged to the regions.

Bosnia's opposition leaders warned the moves may lead the Serb Republic into a new war, while some Bosnian Serbs voiced disquiet over Dodik's moves, fearing a relapse into chaos and even conflict as they struggle just to make ends meet.

The steps have been internationally criticized for violating the 1995 Dayton Accords and undermining the country's Constitution.

Turkey has been taking diplomatic initiatives to de-escalate tensions in Bosnia-Herzegovina. In November, President Erdoğan met with representatives from Bosnian nongovernmental organizations (NGOs) in Istanbul. "We have provided support without any discrimination for the preservation and stabilization of Bosnia-Herzegovina's multicultural and ethnic identity," he said.