Turkey marks 69 years in NATO with expectations from allies 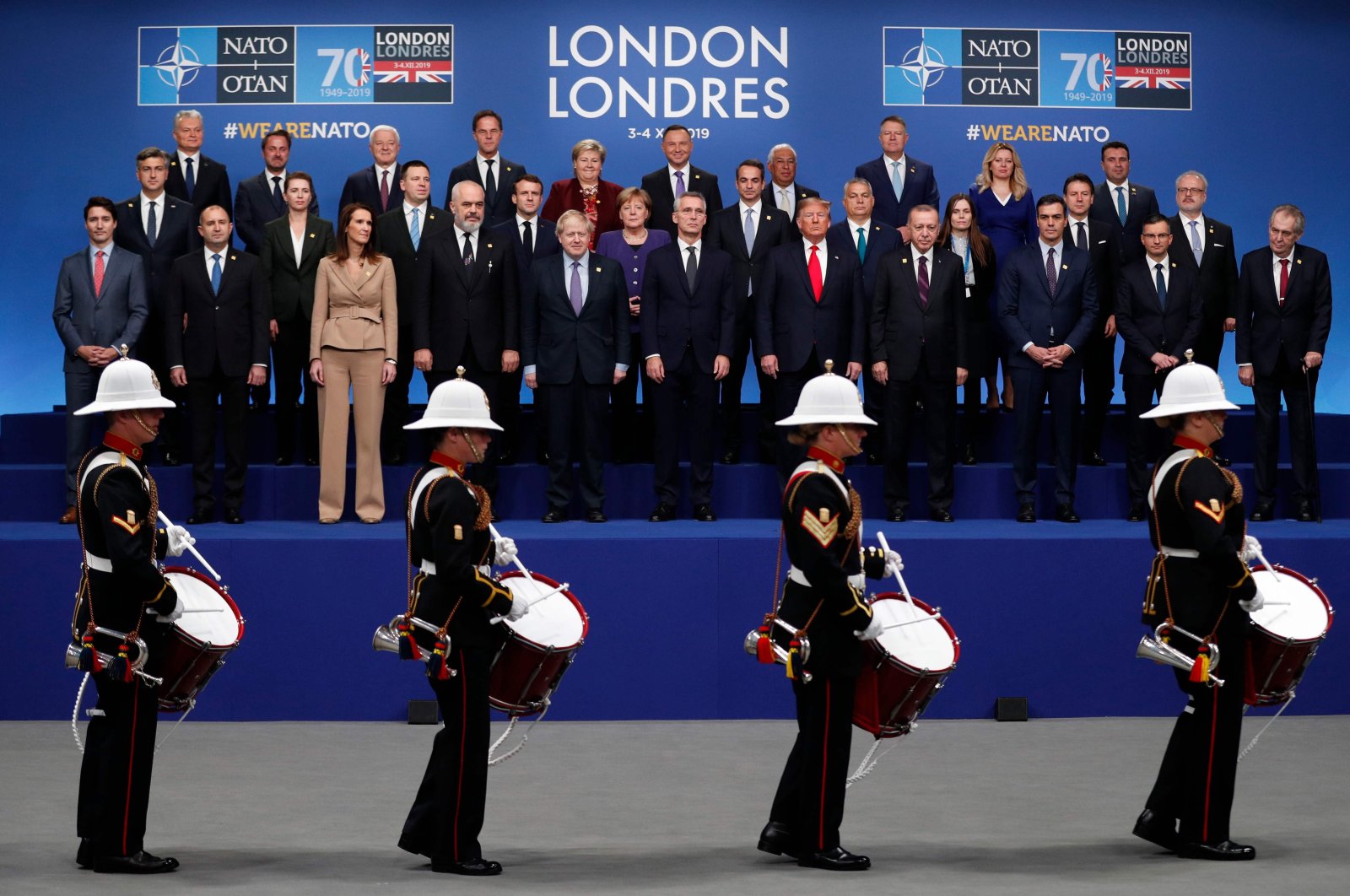 NATO heads of government watch a marching band perform as they pose for the family photo at the NATO summit at the Grove hotel in Watford, northeast of London on Dec. 4, 2019. (AFP)
by DAILY SABAH Feb 18, 2021 12:46 pm

As Turkey marks 69 years of membership in NATO, Turkish officials say they expect the alliance to show solidarity and support for Ankara's dedicated fight against terrorism

Turkey expects its NATO allies to pledge full solidarity and support regarding Ankara’s counterterrorism efforts, as the country celebrates the 69th anniversary of its membership in the organization.

Presidential Communications Director Fahrettin Altun told a panel evaluating the “NATO 2023: United for a New Era” report on Thursday that statements made by U.S. officials regarding the PKK’s execution of Turkish citizens in northern Iraq were offensive and hurtful, as he urged NATO to express solidarity in the country's counterterrorism fight.

The top communications director argued that Turkey has been betrayed by its allies regarding its struggle in Syria, which was conducted to prevent civilian casualties, ensure its national security and prevent a mass migration wave to Europe, as he said the U.S. preferred to provide assistance to the YPG, the PKK terrorist group’s Syrian offshoot, “like an army.”

“It is diplomatically inappropriate for the U.S., which we consider our ally, to consistently take an anti-Turkey stance in our fight against the PKK/PYD/YPG and the Gülenist Terror Group (FETÖ),” Altun said, adding that Turkey strongly opposes arming and supporting terrorist groups in Iraq and Syria under the name of the counterterrorism fight.

Altun continued by saying that Turkey also opposes steps that weaken the southern wing of NATO in Libya and the Eastern Mediterranean.

He highlighted the importance of Turkey’s membership in NATO, saying that the country greatly contributed to the alliance’s success in the Cold War.

Turkey has become one of the leading countries that make the most contribution to NATO in terms of its mission, operations and joint budgets.

Noting that updating the strategic concept was one of the most important suggestions in the report, Altun said comments made by some member states belittling the function of NATO only damage the alliance.

“We cannot evaluate the security threats we are facing today with the perception of the Cold War,” Altun said, adding that NATO has been forced to take a more determined, effective and proactive stance in the face of asymmetrical threats posed by terrorist organizations.

“We are obliged to make sure that a transformation that ensures a principled and determined stance against terrorist groups takes place with the participation of all member states,” Altun said, adding that the spirit of solidarity and unity are the bases that keep the NATO alliance alive.

Touching on the threat of populist statements, Altun said they damage the strength of the alliance, diminish its deterrence power and overshadow Turkey’s confidence in NATO.

“The same way Turkey has worked with its allies to establish peace and stability in Korea, Afghanistan, Mali and Kosovo, we expect the same sensitivity when Turkey’s security is at stake,” Altun said. He continued by saying that Turkey has not received well-deserved support and has even faced unlawful sanctions on arms and equipment due to its legitimate actions to ensure security.

'Allies should respect each other'

Noting that Turkey also has differences of opinion with some member states, Öztürk told Anadolu Agency (AA) that NATO serves as a consultation forum to address these differences.

Touching on NATO Secretary-General Jens Stoltenberg’s aim to strengthen the alliance’s consultation role as part of the 2030 vision, Öztürk said some allies emphasize EU membership and discuss security issues in the EU instead of NATO.

“Some of our allies have exploited bilateral issues by imposing pressure on Turkey through the EU,” Öztürk said, adding that Turkey believes bilateral issues should always be addressed in bilateral mechanisms.

Öztürk also noted that Turkey was ready to contribute to enhancing solidarity and confidence between NATO members.

“Each ally needs to respect others’ security concerns and interests in order to do this,” Öztürk said, adding that this means expressing solidarity in the face of PKK terrorism and not just Daesh and al-Qaida.

The first disappointment came in 1964 when Turkey decided to take action in Cyprus where Turkish Cypriots were suffering under Greek Cypriots. The U.S. president at that time, Lyndon B. Johnson, sent a letter to Turkish President Ismet Inönü, saying that in case of an invasion on the island, NATO would not side with the country.

In the late 1990s, when the fight against the PKK was at its height in Turkey, particularly in the eastern regions of the country, Germany claimed that Turkey was using weapons against civilians and issued an embargo on the country instead of supporting its fight.

Over time, siding with terrorists rather than Turkey became a pattern for many NATO member countries, particularly the U.S. The U.S. has supported the PKK’s Syrian offshoot, the YPG, in Syria for years now, despite Turkey’s warnings that the group is a security threat for them.

Turkey says the weapons are ultimately transferred to the PKK, which is designated as a terrorist group by the U.S., Turkey and the EU, and used against Turkey.

Regarding the Gülenist Terror Group (FETÖ), NATO has shown some support to Turkey. On the first anniversary of the failed coup attempt in Turkey, NATO Secretary-General Jens Stoltenberg said, “I reiterate my strong message that any attempt to undermine democracy in any of our allied countries is unacceptable.”

FETÖ, led by U.S.-based Fetullah Gülen, sought to topple the Turkish government and seize power on July 15, 2016. The coup attempt was prevented by loyal military troops, police and millions of Turkish citizens. Some 250 people, mainly civilians, were killed by putschist soldiers. Still, the U.S., despite receiving evidence regarding FETÖ’s role in the coup attempt, has not extradited Gülen to Turkey.

NATO also failed Turkey in supporting the country from the destructive nature of the civil war in Syria. In 2012, Turkey asked that NATO patriot missiles be placed on its borders to secure them. However, although the missiles were in Turkey for some time, before long, NATO countries took them back, leaving Turkey alone to defend itself.

In 2017, in what was a humiliating incident for Turkey during a joint NATO military exercise in Norway, a picture of Mustafa Kemal Atatürk, the founder of Turkey, was placed among the pictures of “enemy states.” During that time, a fake Facebook account was also issued under the name of President Recep Tayyip Erdoğan with posts favoring “enemy states.”

After Turkish military officials took notice of the incidents, the necessary measures were taken by NATO and a promise was issued to Turkey that similar issues would not occur again.

The series of incidents has significantly damaged NATO's image in the eyes of the Turkish public.

Despite this fluctuating relationship, NATO continues to express Turkey’s worth in the organization, saying that it is a strategic ally. “Turkey is important for NATO, but NATO is also important for Turkey. The alliance is based on the core principle of ‘one for all and all for one,’” Stoltenberg told Anadolu Agency (AA) at the NATO headquarters in Brussels ahead of his official visit to Turkey.