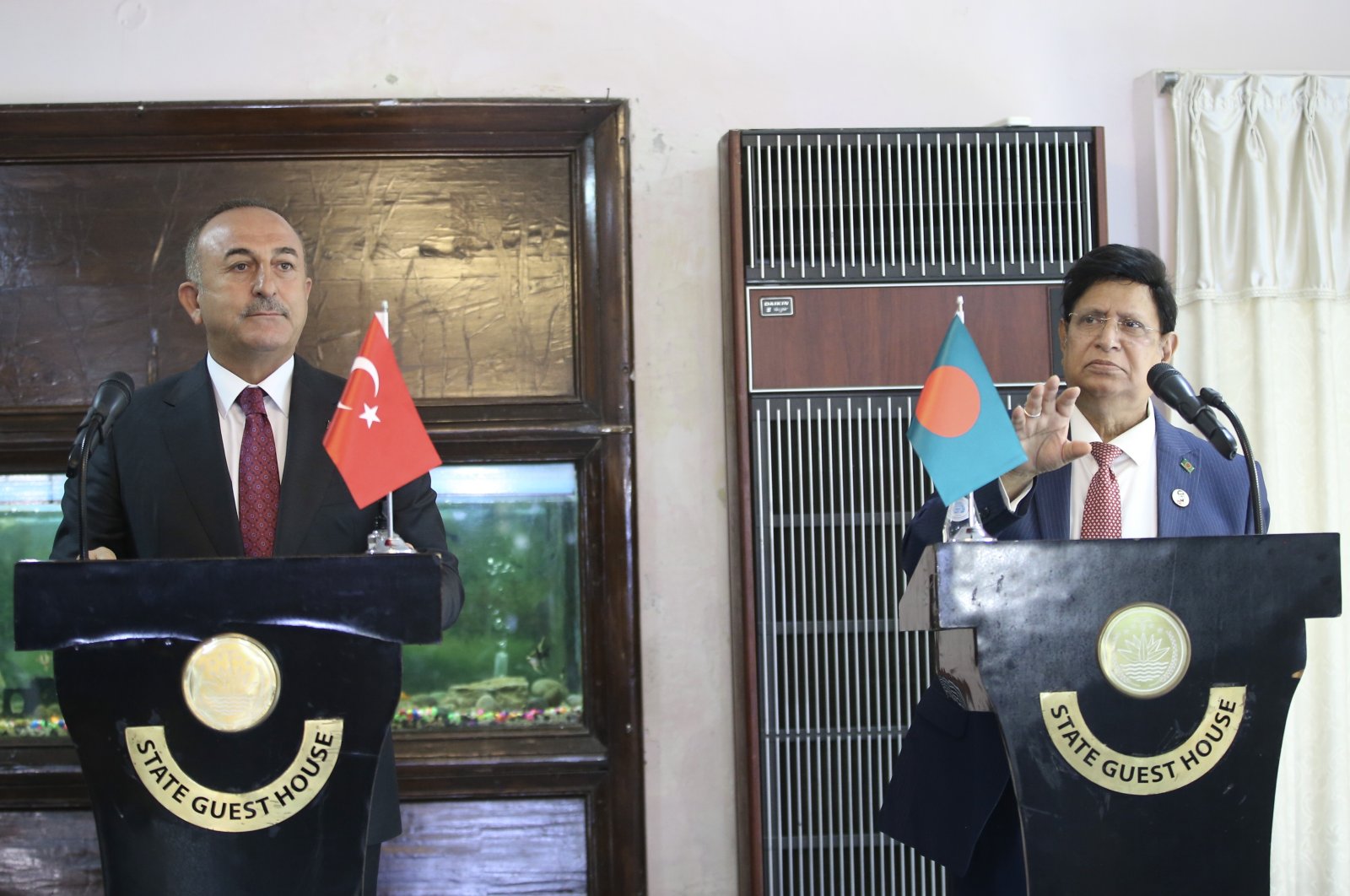 Ankara and Dhaka voiced their will to extend cooperation and increase bilateral trade volume, and Foreign Minister Çavuşoğlu also reiterated support for Rohingya refugees in the country

Foreign Minister Mevlüt Çavuşoğlu on Wednesday attended the inauguration ceremony of the new Turkish embassy compound in Bangladesh’s capital Dhaka and pledged increased cooperation between the two countries during his visit.

Turkey’s top diplomat together with his counterpart A.K. Abdul Momen inaugurated the embassy compound, while President Recep Tayyip Erdoğan sent a video message to the event.

“This compound is a reflection of the importance Turkey attaches to relations with Bangladesh. We wanted this structure to be worthy not only of Turkey but also of Bangladesh. Turkey-Bangladesh relations are flourishing every day,” Erdoğan said.

“This year is the 100th anniversary of the birth of Bangladesh's founding leader, Sheikh Mujibur Rahman, and a few months later we will celebrate the 50th anniversary of brotherly Bangladesh’s independence – in this regard, it carries a significance that the opening of our building takes place this year,” he added.

Çavuşoğlu for his part similarly touched upon friendly bilateral relations and stated that he and Bangladeshi authorities held several important meetings during his visit. He also mentioned that Erdoğan plans to visit Bangladesh in 2021.

Speaking at a joint news conference with Çavuşoğlu prior to the inauguration, Momen highlighted that Bangladesh is one of the 140 countries that has received aid and medical assistance from Turkey for the fight against the coronavirus pandemic.

Çavuşoğlu commended Bangladesh's efforts to stem the spread of the coronavirus. "I would like to congratulate Prime minister Sheikh Hasina and the government here for this successful fight against COVID-19," he said.

Momen noted, "The government and people of Turkey will work to extend cooperation to our common goals and prosperities."

He expressed hope that at a convenient time in the future, a monument of Sheikh Mujibur Rahman will be erected in Turkey and another of the Republic of Turkey's founder Mustafa Kemal Atatürk will be built in Bangladesh.

Çavuşoğlu also announced Turkey's plan to build a hospital of international standards in Bangladesh in the near future.

"We are working on different models and hopefully, in the future, we will be able to build the hospital," he said.

Regarding the bilateral trade volume, Çavuşoğlu said that the trade volume between Turkey and Bangladesh was around $1 billion (TL 8 billion) in 2019, while it reached $754 million in the first 10 months of this year despite the ongoing pandemic.

Çavuşoğlu also highlighted that Bangladesh is an essential partner of Turkey’s Asia Anew Initiative as an example for the whole world of a sustainable development model in South Asia.

Turkey, adopting a multidimensional foreign policy, is taking firm steps toward new regions, one of which is Asia. The Asia Anew Initiative was officially announced in August 2019 by the Foreign Ministry when the 11th ambassadors' meeting took place in Ankara. Its goal is to improve ties with nations in different regions of the continent regarding education, the defense industry, investments, trade, technology, culture and political dialogue.

"As Turkey, we have been supporting these vulnerable people and Bangladesh from the beginning. In the future we will continue to offer support," he said.

According to Amnesty International, more than 750,000 Rohingya refugees, mostly women and children, fled Myanmar and crossed into Bangladesh after Myanmar forces launched a crackdown on the minority Muslim community in August 2017, pushing the number of persecuted people taking shelter in Bangladesh above 1.2 million

Underscoring that it is necessary for the Rohingya people to return to their homes, Çavuşoğlu said, "We will continue making efforts at every level, and we need to also continue working with Myanmar for safe, voluntary and dignified return (of Rohingya)."

Regarding the relocation of Rohingya to the remote island of Bhasan Char, the top Turkish diplomat said the Bangladeshi government should work with the international community, especially with the U.N., U.N. High Commissioner for Refugees (UNHCR) and other agencies, on the matter.

Naming Turkey as one of the leading countries that have provided humanitarian aid for the persecuted Rohingya people, Momen requested more cooperation with Ankara.