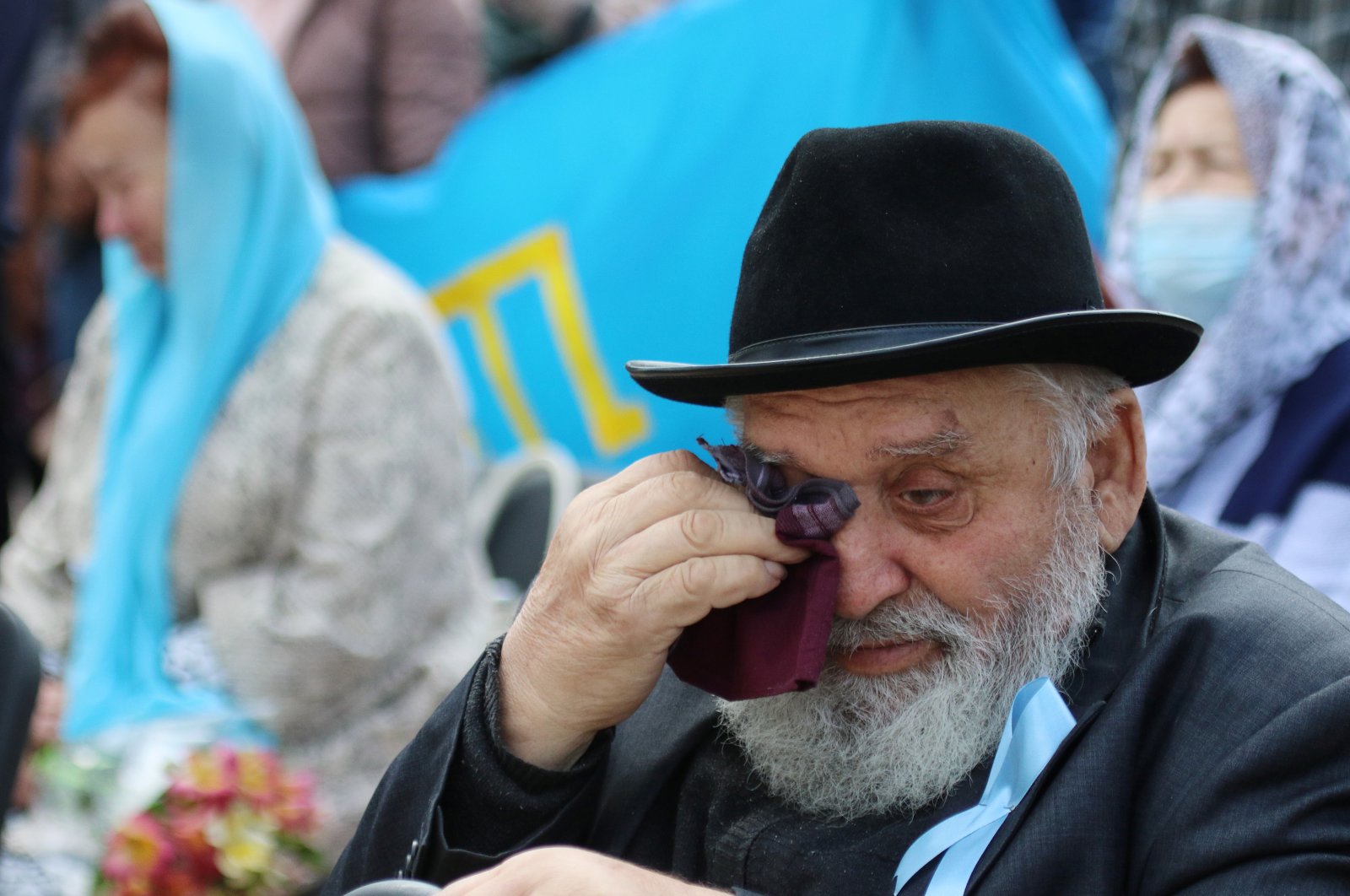 A man reacts during a rally marking the anniversary of the mass deportation of Crimean Tatars from the region in 1944, in Yevpatoriya, Crimea, May 18, 2021. (Reuters Photo)
by DAILY SABAH WITH AA May 18, 2021 12:56 pm
RECOMMENDED

Turkey's Foreign Ministry on Tuesday reiterated the country's determination to stand by the Crimean Tatar Turks, marking the 77th anniversary of the forceful mass deportation of the community by the Soviet Union.

In a statement, Tanju Bilgiç, the ministry spokesperson, recalled that on the night of May 18, 1944, some 250,000 "Crimean Tatar Turkish kinsmen were torn from their ancestral homeland and exiled under inhumane conditions."

Bilgiç underlined that a large number of Crimean Tatars lost their lives during this "tragic event" and those who survived were "forced to live yearning for their homeland."

"77 years after the exile, Crimean Tatar Turks are challenged by the hardships created by the illegal annexation of Crimea. Turkey will continue to stand by its kinsmen in their struggle to overcome their aggrievement, attain peace and prosperity, and to protect their identities," he said.

Turkey and the United States, as well as the United Nations General Assembly, view the annexation as illegal, as does the European Union, which imposed sanctions on Russia for the seizure.

The Crimean Tatar National Assembly last month expressed gratitude to Turkey as Ankara had recently signed an agreement with Ukraine to sponsor a housing project in the country for displaced Crimean Tatars.

The assembly praised Turkey's efforts to raise the living standards of Crimean Tatar Turks forced to migrate from Crimea since Russia illegally annexed the peninsula in 2014.

Crimean Tatars are a Muslim community indigenous to the Black Sea peninsula. On May 18, 1944, hundreds of thousands of Crimean Tatars were deported to Central Asia by Joseph Stalin's Soviet regime, who accused them of collaborating with occupying Nazi forces. Crimean Tatars were deported to various regions within Soviet territories, in particular to Siberia and Uzbekistan. Almost half of those exiled, who endured long months of dire living conditions, are thought to have died of starvation and disease.

Most Crimean Tatars opposed Moscow's annexation of the Crimean Peninsula in 2014. Russian authorities have since cracked down on the community, banning their assembly and television channel as well as detaining and jailing dozens of activists.

Bilgiç also marked the 157th anniversary of the "Circassian Exile," in which people of the Caucasus were forced to leave their homelands and seek shelter in Anatolia during the invasion of Tsarist Russia, suffering great losses in the process.

"The pain of this tragedy remains alive in our collective memories," the spokesperson said.

"We share the pain of the Crimean Tatar Turks, as well as the brotherly peoples of the Caucasus and wish mercy upon and respectfully honor the memory of those who lost their lives during these exiles," Bilgiç added.

In June 2020, the Ukrainian Parliament passed a bill calling on the U.N. and international organizations to recognize the deportation of the Crimean Tatars as genocide.