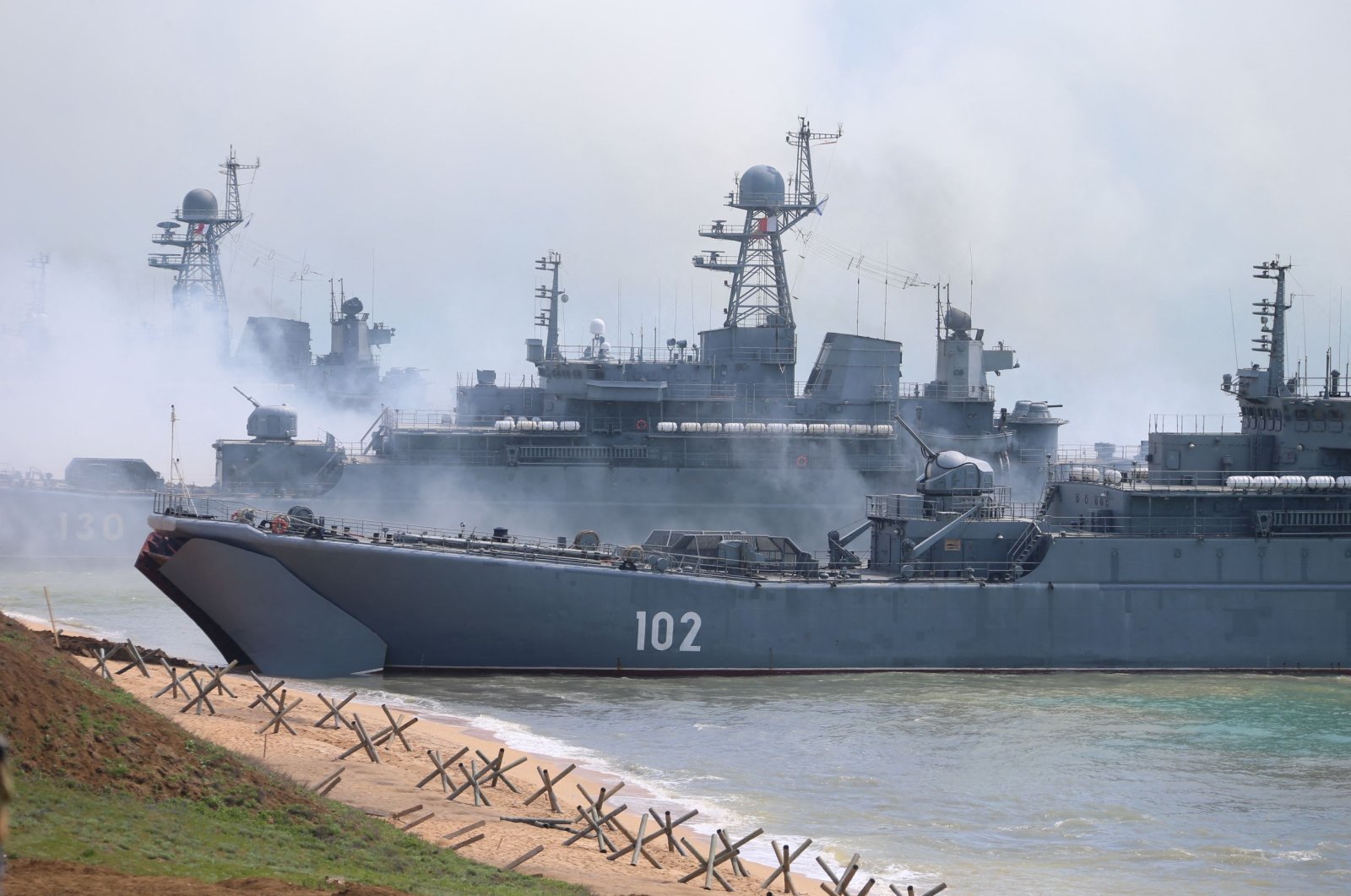 Russian forces landing ashore during a military drill along the Opuk training ground not far from the town of Kerch, on the Kerch Peninsula in the east of Crimea, in this handout picture released by the Russian Defense Ministry on April 22, 2021. (AFP Photo)
by Daily Sabah with AFP Apr 23, 2021 12:15 pm
RECOMMENDED

Russia began the withdrawal of troops that had been deployed for weeks near the Ukrainian border amid what Moscow called military exercises, the defense ministry said Friday, following tensions between Moscow and the West over the buildup.

"Military units and formations are currently marching to railway loading stations and airfields, and loading onto landing ships, railway platforms and military transport aircraft," the ministry said in a statement carried by Russian news agencies.

It is noted that the troops of the Southern Military District and the Airborne Forces left for the places of permanent deployment. Earlier, Defense Minister Sergei Shoigu ordered the transfer to be completed by May 1.

Shoigu had announced Thursday that tens of thousands of troops deployed to southern and western Russia for exercises over the past few weeks would be returning to their bases.

The buildup, which came amid an increase in fighting between Kyiv's forces and pro-Russia eastern separatists since the start of the year, raised deep concerns in Ukraine and drew warnings from its Western allies. Both NATO and Kyiv welcomed Russia's announcement of the drawdown, with Ukrainian President Volodymyr Zelenskiy saying "the reduction of troops on our border proportionally reduces tension."

“Ukraine is always on the alert, but welcomes any steps to reduce the military presence and de-escalate the situation in Donbass,” he wrote on Twitter, thanking international partners for their support and said that Ukraine "wants peace."

A NATO official said any "de-escalation by Russia" would be important, adding, "NATO remains vigilant and we will continue to closely monitor Russia's unjustified military buildup in and around Ukraine." The United States had said it was "looking for action" on the troop withdrawal.

Hours after the end of the exercises was announced, Russian President Vladimir Putin said Zelenskiy was welcome in Moscow anytime to discuss bilateral relations.

"If we are talking about bilateral relations, then by all means, we are ready to welcome the president of Ukraine at any time that is convenient for him," the Russian leader said during a meeting with Belarusian leader Alexander Lukashenko in Moscow.

Putin's invitation to Zelenskiy came in response to this week's offer from the Ukrainian president for the two leaders to meet in eastern Ukraine, where an uptick in fighting between Kyiv's army and pro-Moscow separatists has raised fears of a return to full-blown war.

"If President Zelenskiy wants to start repairing relations, then we of course welcome it," Putin told journalists at the beginning of negotiations with Lukashenko. But the Russian leader said that if Zelenskiy hoped to resolve problems stemming from fighting in eastern Ukraine, then he should first meet with leaders of the breakaway regions in Donetsk and Luhansk.

"And only then discuss these issues with representatives of third countries, which in this the case is Russia," Putin said.

Russia said it had sent tens of thousands of troops to the country's south and west and to Crimea, which Moscow annexed from Ukraine in 2014, for a series of military drills. It also ramped up military exercises in the Black Sea earlier this week, with more than 20 Russian warships participating in joint drills with air force fighter jets. Western officials said around 100,000 Russian soldiers had been deployed for the exercises, which Shoigu had said were in response to "threatening" NATO actions.

Kyiv has been battling pro-Russian separatists in the eastern Donetsk and Lugansk regions since 2014, following Moscow's annexation of the Crimean peninsula, with the conflict claiming 13,000 lives. Fighting subsided as a new cease-fire agreement took hold last July, but clashes, mainly involving artillery, mortar and sniper fire, picked up again since the start of 2021, with both sides blaming each other. At least 31 Ukrainian soldiers have been killed since the start of the year, compared to 50 in all of 2020, while the separatists say 22 of their fighters have died.