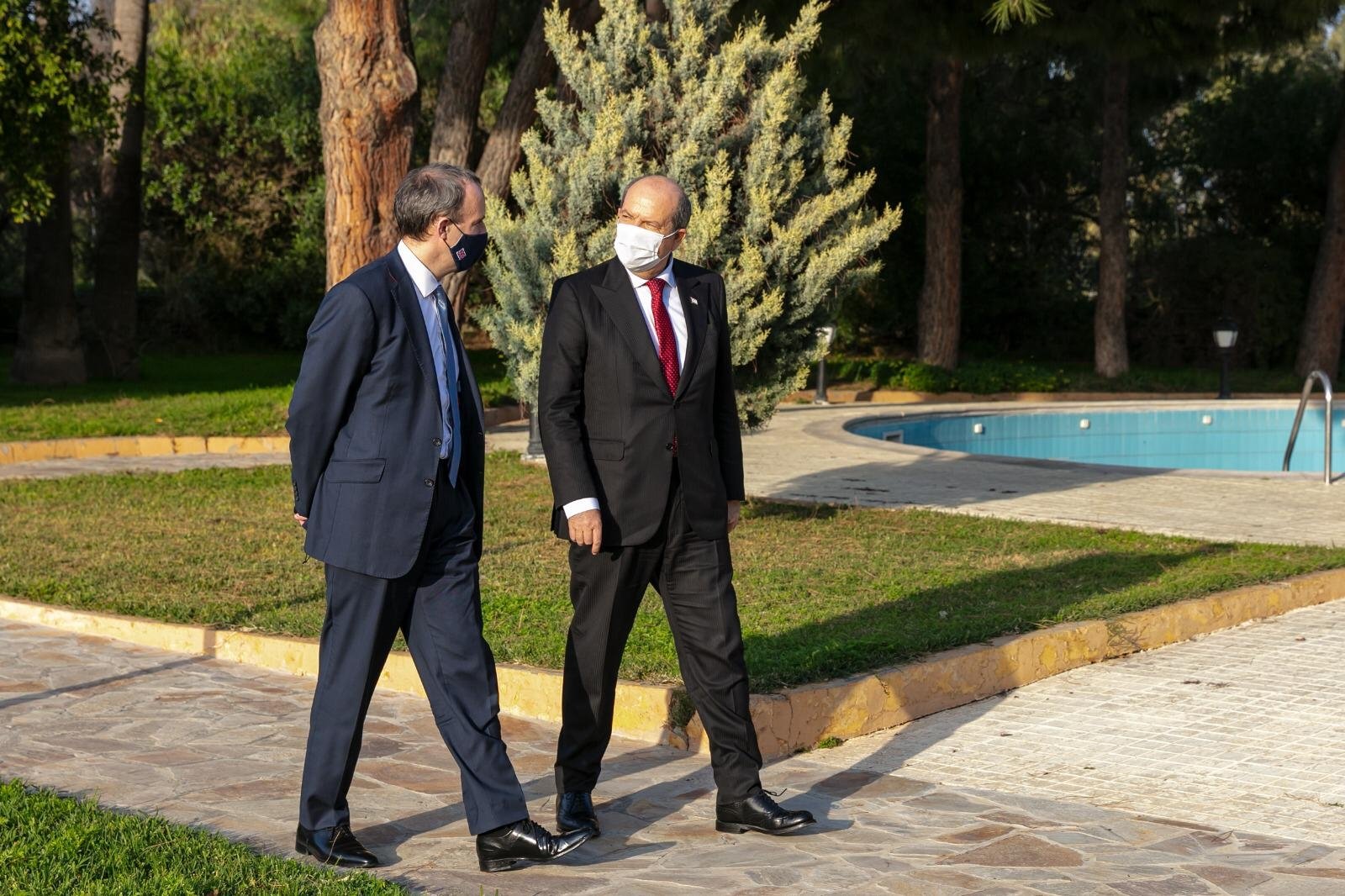 Tatar noted that Britain knows the island’s history well and can now establish important relations with the TRNC. He said the U.K.'s interest in the Cyprus issue is very important for the TRNC.

Tatar said the most important issue on the agenda during the meeting was the unofficial 5+1 meeting on Cyprus with the participation of the guarantor countries which is planned to be held under the leadership of the United Nations. He added that Britain is continuing its work on this issue.

“Our position is in full compliance with Turkey. We advocate the cooperation of the two states which live side by side based on sovereign equality,” he said.

“We conveyed to Raab that we are in favor of reaching a result through negotiations in Cyprus.”

Tatar emphasized that Raab's visit was an important development for them. The British foreign minister listened to their point of view and saw the justification of Turkish Cypriots in the work to be done by Britain, he added.

He underlined that there are at least 300,000 Turkish Cypriots living in the U.K. and 10,000 British citizens in the TRNC and the relations between the two countries will be for the benefit of these citizens.

Commenting on Britain’s stance on Cyprus, Tatar said that as a guarantor country and party to the Cyprus issue, Britain’s proximity to the Turkish Cypriots makes them happy. In addition to its guarantor status, the U.K., the former colonial ruler of Cyprus, still maintains two sovereign military bases (Akrotiri and Dhekelia) in the south of the island.

“The UK continues to engage ahead of proposed informal talks on #Cyprus Settlement led by @antonioguterres. Today I met with Turkish Cypriot leader @Ersinrtatar to urge flexibility ahead of the talks for the benefit of both Cypriot communities,” Raab said on Twitter.

The UK continues to engage ahead of proposed informal talks on #Cyprus Settlement led by @antonioguterres. Today I met with Turkish Cypriot leader @Ersinrtatar to urge flexibility ahead of the talks for the benefit of both Cypriot communities. pic.twitter.com/LMYVs5he5e

Tatar also drew attention to the importance of opportunities that can be developed with the U.K. in Turkish Cypriots’ struggle for existence, economic relations and direct flights.

“As Raab stated, Britain also wants to carry out some work and initiatives for Turkish Cypriots,” he added.

Tatar said he requested the U.K. to consider providing the coronavirus vaccine developed by Oxford University to the TRNC.

“We had already heard that some vaccines could be provided to the Greek Cypriot side. Raab said they would evaluate this positively,” he added.

Cyprus has been divided since 1974 when Turkey used its guarantor rights to intervene in the island after a far-right military coup sponsored by the military junta, then in power in Athens, sought to unite the island with Greece and toppled President Archbishop Makarios III. After decades of interethnic violence and terror, mainly targeting the island’s British colonial rulers until independence in 1960, Turkish Cypriots were forced to live in enclaves after Greek Cypriots unilaterally changed the constitution in 1963. The Turkish Cypriot community was stripped of their political rights in violation of the constitution and founding agreements signed in 1959 between Turkish Cypriot and Greek Cypriot community leaders and guarantor powers Great Britain, Greece and Turkey.

The decades since have seen several attempts to resolve the Cyprus dispute, all ending in failure. The latest, held with the participation of all guarantor countries – Turkey, Greece, and the U.K. – came to an end without any progress in 2017 in Switzerland.