‘Turkey to take matters into own hands against terrorism’ 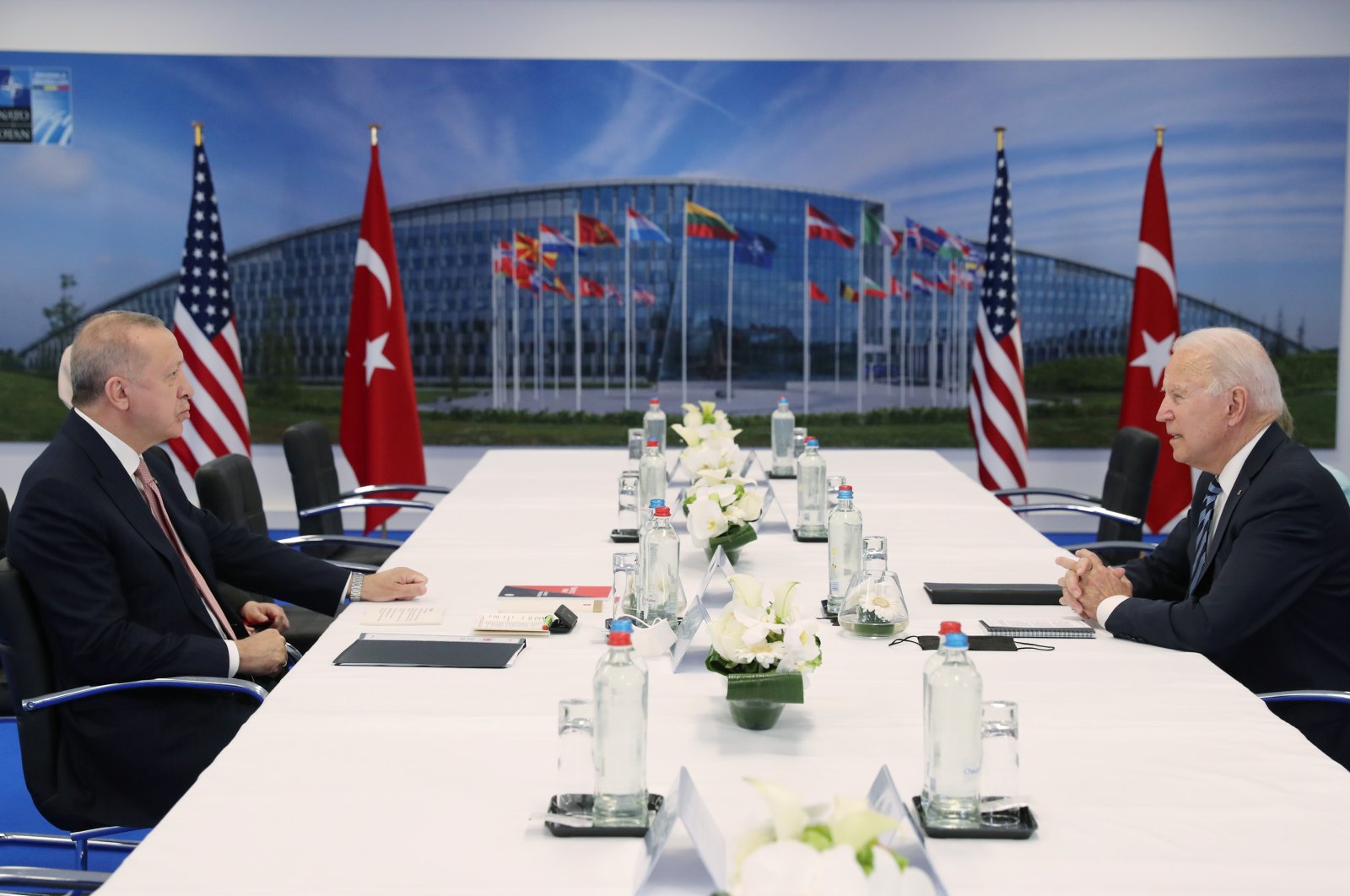 Turkey will take matters into its own hands if it cannot receive the support it expects from its allies in the fight against terrorism, President Recep Tayyip Erdoğan stated, saying that Washington will realize sooner or later its error in supporting a terrorist organization.

Speaking to members of the Turkish press in Azerbaijan’s capital Baku, Erdoğan touched on relations with the U.S. following his recent meeting with U.S. President Joe Biden on the sidelines of the NATO summit in Brussels.

Turkey conveyed its expectations on regional issues to its allies, Erdoğan said, evaluating the NATO summit.

"We have always emphasized that terrorism cannot be destroyed with the ambivalent attitude of “good terrorist, bad terrorist”. It is a historical mistake to, instead of standing next to an ally who is the target of terrorism, prefer the terrorist organizations that that ally is fighting. Those who support terrorist organizations and encourage them will sooner or later realize what a big mistake they made," Erdoğan said.

“We expect them to respect our country’s sovereign rights and security sensitivities. We want them to display solidarity, which is a necessity of the spirit of an alliance," he added.

Erdoğan, on the sidelines of the summit, also met with the presidents of Lithuania, Latvia and France and the prime ministers of the U.K., Germany, Greece, Hungary, the Netherlands and Spain.

“The U.S. is not able to say that the YPG/PKK bombed the hospital in Afrin,” he underlined, implying that the U.S.’ policy on Syria remains the same.

He reminded that he presented an exclusive book providing details on Turkey's counterterrorism efforts during his one-on-one meetings with country leaders at the NATO summit and said that the book was highly welcomed.

“We have once again conveyed our fight against Daesh, the PKK, YPG and FETÖ on the highest level to our interlocutors. We will continue our fight against terrorism. We do this for our country, our region, for global peace and justice. Terrorism is a universal challenge,” he stated.

“We have proven our power in Syria and Libya and will continue to do so.”

The U.S. has primarily partnered with the YPG in northeastern Syria in its fight against the Daesh terrorist group. On the other hand, Turkey strongly opposes the YPG's presence in northern Syria. Ankara has long objected to the U.S.' support for the YPG, a group that poses a threat to Turkey and that terrorizes local people, destroying their homes and forcing them to flee.

Ankara’s purchase of the Russian S-400 missile defense system, on the other hand, remains one of the main problems with Washington besides the fight against terrorism.

Erdoğan underlined that he told Biden that Turkey will not change its current stance. He reiterated that Turkey aimed to purchase the F-35s but that the U.S. denied it.

The U.S. should not expect Turkey to take another step forward concerning either the F-35 or S-400s because "we did our part," Erdoğan said. “We will continue to discuss all steps and issues that we can take together in the field of the defense industry.”

He also underlined that the Turkish defense industry attracts great interest from the world. “We saw interest in this issue, especially at the NATO summit," said Erdoğan.

Erdoğan also highlighted that Biden plans a visit to Turkey.

Saying that Turkey aims to pursue its relations with the U.S. in accordance with the alliance and a strategic partnership, Erdoğan said: “We have significant cooperation potential on a wide scale ranging from Syria, Libya, the fight against terrorism, energy and trade.”

“We aim to realize this potential by operating all current mechanisms between our countries.”

On potential cooperation in Afganistan, Erdoğan said that the U.S. is positive on Turkey’s role.

“Turkey is one of the leading countries that is putting up efforts for peace and stability in Afghanistan,” Erdoğan said, adding that Turkey will continue its support toward the country.

Turkey has offered to guard and run Kabul's airport after NATO forces withdraw from Afghanistan. The airport plan may offer a rare opportunity to build goodwill and trust and could help improve ties between Ankara and the West.

Turkey sent a large delegation – including its foreign, defense and interior ministers plus its intelligence chief, presidential spokesperson and communications director – to Libya ahead of the NATO summit.

Erdoğan underlined the importance of their meetings, saying that Ankara aimed to further enhance relations with the North African country.

“We had the chance to strengthen our relations and review our agreements.”

In 2019, Ankara signed a maritime delimitation agreement with the Government of National Accord (GNA) over the Eastern Mediterranean that provided a legal framework to prevent any fait accompli by regional states. The two countries also signed a military cooperation accord.

Erdoğan also touched on his visit to Azerbaijan and its recently liberated regions in Nagorno-Karabakh, pledging further cooperation with Baku on several fields.

Answering whether Russia was impeding the process of opening the Zangezur corridor, Erdoğan said that this was not the case. “On the contrary, Russia is being helpful in this regard.

“We will soon meet with Russian President Putin.”

Azerbaijani projects in the Zangezur corridor will include highways and rail lines that would stretch across territories of Armenia's Syunik region.

Following the completion of the railway, Azerbaijan will be able to reach Iran, Armenia and Nakhchivan uninterruptedly by train.

He added that Russia leans toward a platform of six countries in the region for peace in the Caucasus. “We expect similarly positive answers from Georgia and Armenia.”

The President has frequently called for a six-nation platform comprising Turkey, Russia, Iran, Azerbaijan, Georgia and Armenia for permanent peace, stability and cooperation in the region.

“This corridor will bring great advantages to Armenia. Similarly, it will also open opportunities for Azerbaijan. I believe that it will contribute to agriculture in the region,” he stated.

Furthermore, speaking on the recently signed Shusha declaration, the president said that it could be expanded.

On June 15, Ankara and Baku signed a declaration “on allied relations” aimed at deepening ties in several areas of cooperation, including security during a visit to Shusha, a city that Azerbaijan recaptured from Armenian occupational forces in last autumn’s conflict.

Erdoğan, the first foreign leader to visit Shusha after it was retaken by Azerbaijan, also promised to open a Turkish consulate in the city.

Both countries also pledged "to support each other in case of threat or attack by a third country on their independence or territorial integrity."

He stated that cooperation will also continue in the field of energy. “We have cooperation with Azerbaijan, especially in the Trans Anatolian Natural Gas Pipeline (TANAP) and the Trans Adriatic Pipeline (TAP),” Erdoğan said, indicating that besides these projects, both countries “could take steps in a new process.”

Turkey and Azerbaijan might cooperate in third countries including Libya, the president pointed out.