Turkey urges action against racism on anniversary of Hanau attack 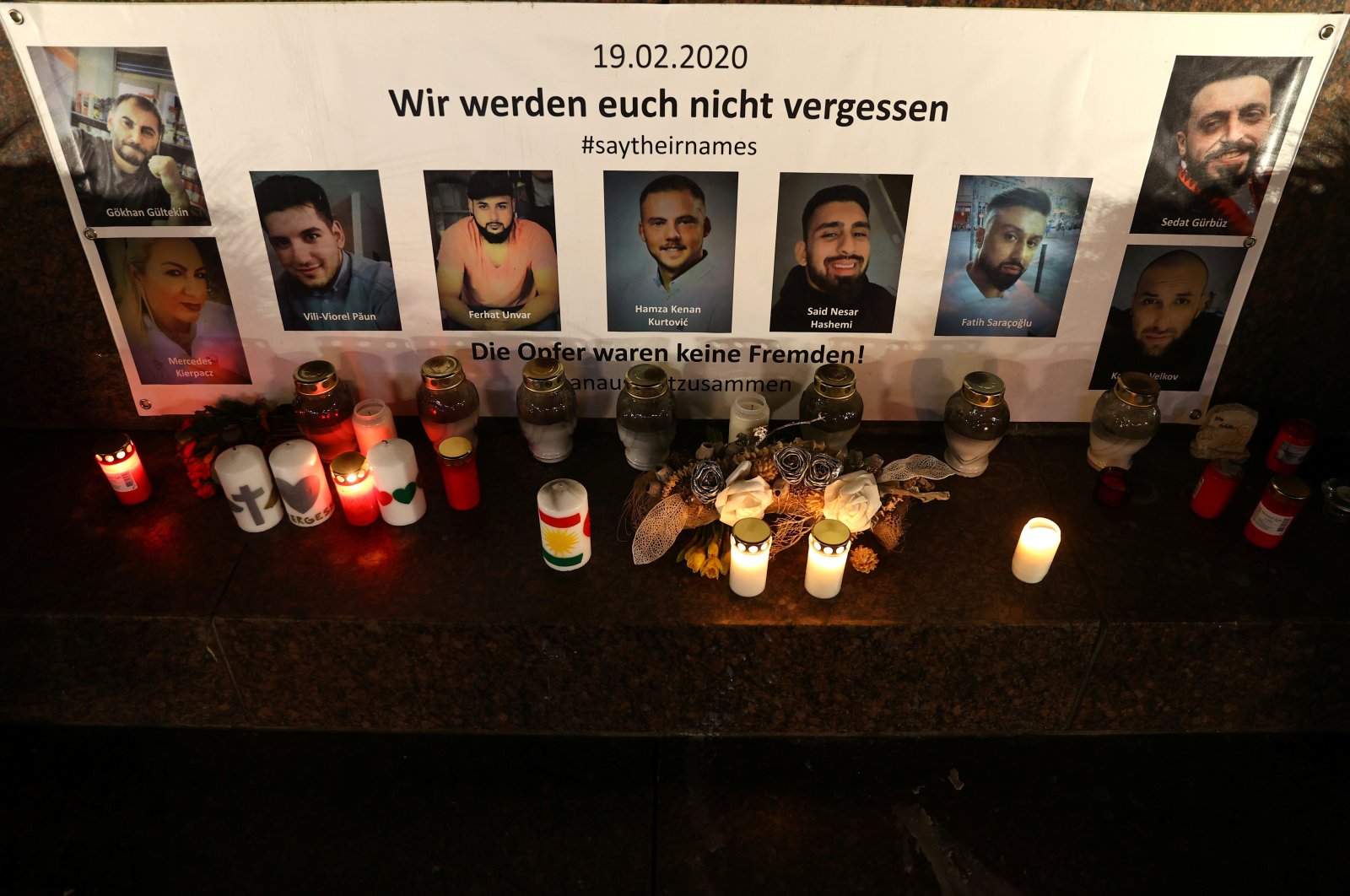 Pictures of the victims and candles are seen at the statue of German writers brothers Grimm one night ahead of the first anniversary of an attack where a man, who had posted a racist manifesto online, shot dead nine people in Hanau, Germany, Feb. 18, 2021. (Reuters Photo)
by DAILY SABAH Feb 19, 2021 10:28 am
RECOMMENDED

Turkey will expose anti-Muslim, xenophobic and racist attacks and rhetoric, Foreign Minister Mevlüt Çavuşoğlu said Friday, as the country will join an event that commemorates the victims who lost their lives in a xenophobic terrorist attack in Germany’s Hanau last year.

“We say this loud and clear: These attacks need to end now,” Çavuşoğlu said in a statement, adding that Germany needs to finalize the investigation on the Hanau attack in a fair and speedy manner.

“Otherwise, this sick mentality will not only pose a threat to foreigners and Muslims but everyone,” he said, adding that politicians have a tremendous responsibility to make sure that populist, racist and anti-migrant rhetoric does not take European politics hostage.

“We can only solve this issue through cooperation and by taking determined steps,” Çavuşoğlu said, as he added that Turkey will continue to stand by its citizens living abroad.

Turkish Deputy Foreign Minister Yavuz Selim Kıran will attend a ceremony in Hanau to express solidarity with victims of xenophobic attacks. German President Frank-Walter Steinmeier will also attend the ceremony, which will be limited to 50 participants due to the ongoing COVID-19 pandemic, German Deutsche Welle reported. Over 80 cities in the country will participate in the commemoration and will hold demonstrations against racism and far-right violence, while prayers for victims and their loved ones will be made during Friday prayers at all Turkish-Islamic Union for Religious Affairs (DITIB)-linked mosques.

“The ruthless attack in Hanau has shown that racism, xenophobia and Islamophobia need to be addressed in a much more effective and serious manner and it is about time to enhance international cooperation in this regard,” the ministry said, adding that Turkey expects Germany to finalize the investigation in a speedy and fair manner.

The ministry also reiterated that authorities need to refrain from the far-right and populist political rhetoric that ramps up xenophobia, Islamophobia and racism in Europe.

“We call on all European countries to embrace peace and coexistence principles and not remain silent in the face of this threat,” the ministry said, adding that Turkey is ready to display international and bilateral cooperation against all types of racism and xenophobia.

Criticizing Germany for mishandling the incident, Aiman Mazyek, chairman of the Central Council of Muslims in Germany, said it was necessary for the German interior ministry to recognize far-right violence as concrete rather than a symbolic threat. He argued that the issue needs to be approached in a different manner and that they need to highlight the idea that the victims who were killed in the attack were Germans.

The Turkish community in Germany also criticized German authorities, saying that the country has not learned its lesson from such incidents, as they said it was necessary for Germany to shed light on the incident.

Hamburg Islamic Communities Council also said the issue of racism persists in Germany and blamed far-right and racist leniency in police and public authorities for paving way for the attack.

Highlighting the fact that at least 900 anti-Muslim crimes have been committed in Germany last year, the Muslim Coordination Council (KRM) urged the state to carry out an effective investigation against terrorists.

The Jewish community in Germany also issued a statement, as Josef Schuster, the President of the Central Council of Jews in Germany said the perpetrator of the attack was not radicalized in an isolated manner and that it was necessary for the state to unearth far-right networks in the country.

Speaking on the eve of the anniversary, German Foreign Minister Heiko Maas said that no one could argue that they didn't see the Hanau attack coming considering the statistics gathered by domestic intelligence in the years prior.

He noted that more than 33,000 right-wing extremists live in Germany, 13,000 of whom are willing to use violence, and the trend is rising.

"Why aren't we all hearing alarm bells?" the foreign minister asked. "And how can it be that the bereaved are still complaining about the disrespect and bureaucratic coldness they face from the authorities?"

Maas also spoke of "everyday racism in governmental and municipal offices, in shops, in schools, buses and trains" that must be stopped.

Nine people were killed and five others were wounded in a shooting spree targeting two shisha bars frequented by Turks in Hanau, near the city of Frankfurt in Hesse, Germany. After carrying out the racially motivated attacks, 43-year-old Tobias Rathjen returned home and killed his 72-year-old mother and himself. Prior to the violence, he had shared unclear thoughts, abstruse conspiracy theories and racist views online.

Germany’s government paid a total of 1.09 million euros ($1.13 million) – 105,000 euros to each victims' relatives – in compensation for those who lost their lives during the racist attack, the German press reported based on information obtained from the Interior Ministry.

According to a legal regulation adopted in 2010, victims of racist or terrorist attacks in Germany are paid compensation.

Even as a year has passed since the attack rocked Germany, the Turkish community still lives in fear, particularly the victims’ families who received death threats from the attacker’s father, Hans-Gerd Rathjen. The families claim that Rathjen penned multiple letters to prosecutors in which he threatened their lives. They, therefore, sought restraining orders against him, but their demands went unanswered by authorities.

The events of Feb. 19, 2020, were a confirmation of the rising racist, Islamophobic sentiment sweeping Europe, resulting in the popularity of more far-right figures in many states. Germany has a Turkish population of over 3 million, who were brought to the country in small groups as “guest workers” to rebuild Germany in the wake of World War II.