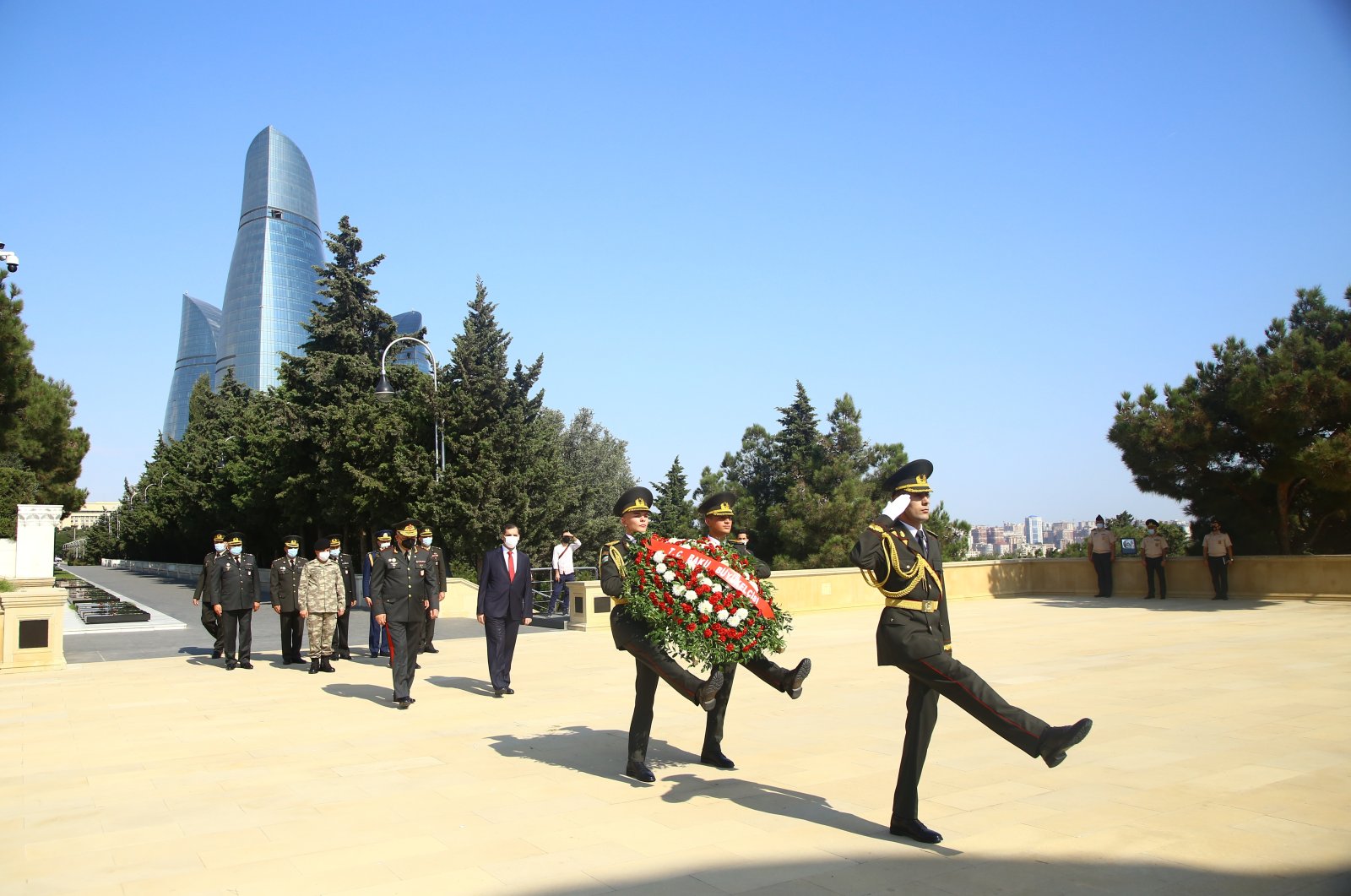 A commemoration ceremony for the 102nd anniversary of the liberation of the Azerbaijani capital Baku from an invasion of Armenian and Bolshevik gangs is held at the Turkish Martyrs’ Cemetery in Baku, Azerbaijan, Sept. 22, 2020 (AA Photo)
by DAILY SABAH WITH AA Sep 22, 2020 12:55 pm

While Yerevan continues its offensives, Ankara and Baku stand united as Turkey’s top diplomat extends condolences to the brotherly nation and urges Armenia to 'come to its senses'

Turkey's Foreign Minister Mevlüt Çavuşoğlu urged Yerevan on Tuesday to stop its aggression and to “come to its senses” after an Azerbaijani soldier was killed the previous day during an Armenian armed forces attack.

“We are always standing side by side with Azerbaijan,” the top diplomat said.

Earlier, Turkey's National Defense Ministry also warned Armenia against “playing with fire” after Mammadov was killed in a cross-border offensive.

"Armenia, which unlawfully occupies Nagorno-Karabakh, violated the cease-fire in the Tovuz region and killed a heroic Azerbaijani soldier," the ministry said on Twitter.

The Defense Ministry wished Allah's mercy upon the fallen soldier and conveyed condolences to the brotherly country of Azerbaijan.

Referencing this fact, there are four United Nations Security Council and two U.N. General Assembly resolutions as well as calls by many international organizations that demand the withdrawal of the occupational Armenian forces from Nagorno-Karabakh and seven other occupied regions of Azerbaijan.

In the aftermath of the Armenian attack that killed Mammadov, the Office of the Chief Public Prosecutor of Azerbaijan opened an investigation into the incident according to the article “National, racial, religious hatred and willful murder with hostility” of Azerbaijani penal law.

According to a statement from the Office, Azerbaijani authorities are taking every necessary measure to bring the responsible Armenian soldiers to justice in line with international law.

In addition, Azerbaijan's Foreign Ministry said in a statement that Armenia is responsible for the “bloody incident” and its aggression is an indicator of its intention to continue attacks.

Saying that even though the Armenian government is releasing statements regarding a possible solution for the Nagorno-Karabakh problem, the ministry noted that responsibility for the hostilities on the Azerbaijan-Armenia border is caused by the same administration in Yerevan.

According to a statement by Azerbaijan’s Ministry of Defense, the UAV was carrying out an illegal reconnaissance flight over the nation's territory and was therefore pulled from the sky that evening.

Speaking to a local TV channel, Aliyev evaluated his country’s bilateral relations with Turkey. He expressed his gratitude for the supportive messages coming from Ankara following military clashes between the Armenian and Azerbaijani armies in July.

“First of all, I thank my dear brother Turkish President Recep Tayyip Erdoğan. He proved once again that Turkey has always sided with Azerbaijan. This is a manifestation of the Turkey-Azerbaijan brotherhood and unity. At the same time, other officials including the Parliament speaker, defense minister, foreign minister and our other brothers have several times showed their solidarity and support to Azerbaijan. This also proves that Turkey sides with justice and truth,” Aliyev said.

Aliyev also touched upon the joint military exercises conducted by the two countries’ armed forces. “We conduct military exercises every year. There is nothing unusual here. Yes, this time it coincided with the Tovuz incident. Armenia should think about whether it was coincidence or not. These drills once again demonstrate our unity. There are only 80 kilometers (49 miles) between the Azerbaijan-Armenia border in Nakhchivan and Yerevan. Armenia knows it, and this intimidates them. I think that they stress out because of this fear,” he said.

Stating that the military activities of Turkey and Azerbaijan are a necessity for regional stability, Aliyev said Armenia also has territorial claims against Turkey in their constitution.

Ankara and Baku, with the participation of the countries' air and ground forces, launched joint military drills in the wake of recent Armenian attacks on Azerbaijani border points. The war exercises began on July 29, with Aug. 5 being the last day of ground engagements – which included artillery, armored vehicles and mortars striking simulated targets – in the capital Baku and the exclave of Nakhchivan, Azerbaijan's autonomous region bordering Turkey. Air combat drills involving jets and helicopters continued in Baku, Nakhchivan, Ganja, Kurdamir and Yevlakh until Aug. 10.