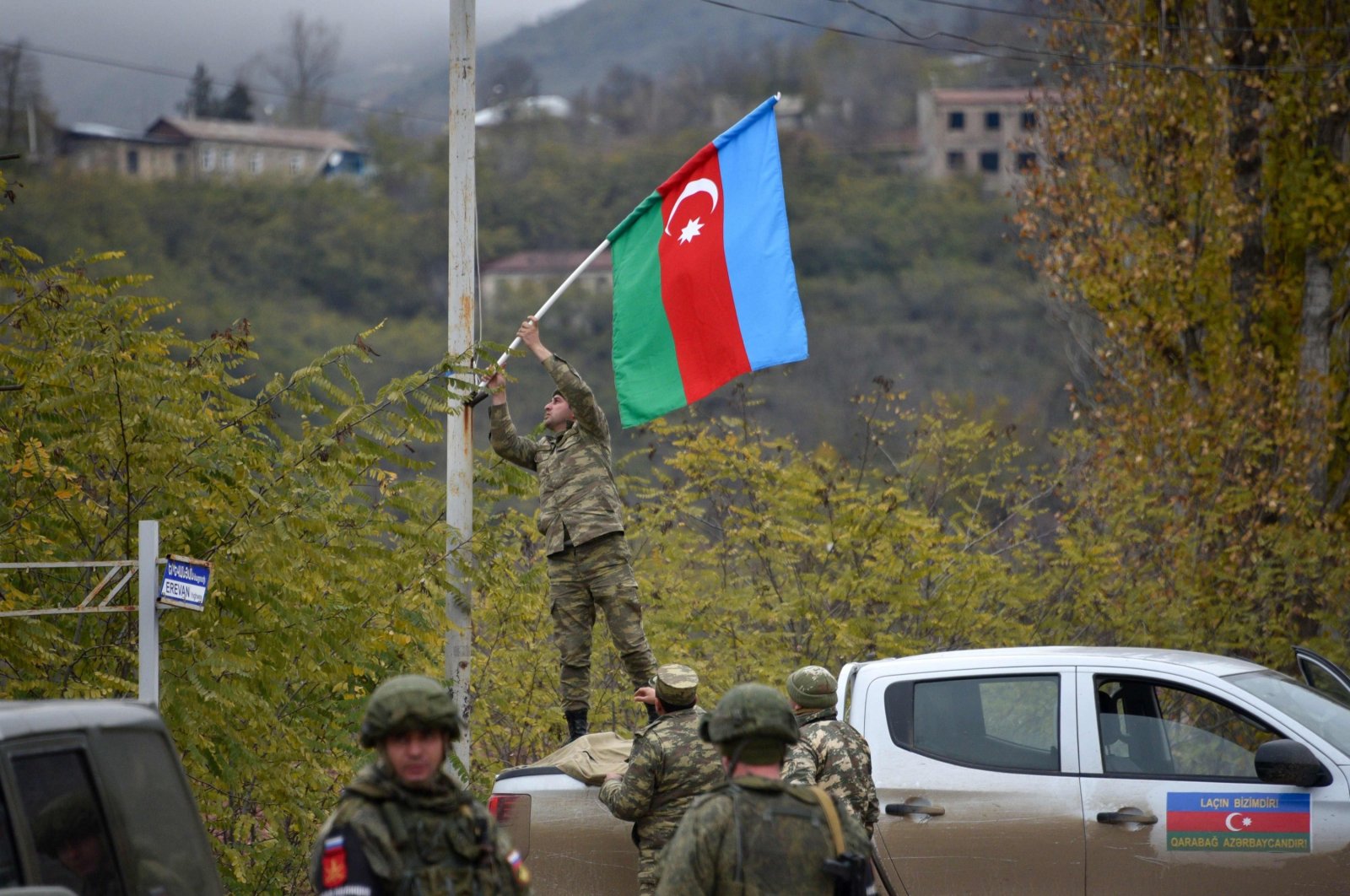 An Azerbaijani soldier fixes a national flag on a lamppost in the town of Lachin, the Nagorno-Karabakh region, Azerbaijan, Dec. 1, 2020. (AFP Photo)
by DAILY SABAH Aug 29, 2021 2:46 pm
RECOMMENDED

“There is a need for new and constructive approaches in our region,” Erdoğan told reporters on his return from official visits to Montenegro and Bosnia-Herzegovina.

“Even if there are differences in views and expectations, it will be a responsible move to show sincere efforts for developing good neighborly relations based on trust, including respecting the sovereignty and territorial integrity of one another,” Erdoğan highlighted.

He said that instead of unilateral accusations, realistic approaches are needed.

“We can work toward gradually normalizing our relations with an Armenian government that states it is ready for such progress,” he noted.

He urged the country to permanently establish peace and stability and to focus on economic development and regional cooperation.

Pointing out that Azerbaijan has suggested launching negotiations with Afghanistan for a comprehensive peace agreement, Erdoğan said that many new opportunities would emerge for the countries of the South Caucasus if the whole region was connected, as put forth in the trilateral declaration of Nov. 9, 2020.

Turkey is ready to work with all parties that want to take advantage of this historic opportunity, the president explained.

Erdoğan reiterated his call for a regional cooperation platform that also includes Armenia.

“If this platform is accepted, I believe that the whole region will be relieved due to the railways and roads that will have to be made,” he said, adding that Russian President Vladimir Putin and Azerbaijan’s President Ilham Aliyev also agreed on this.

Plans to revive the region can also be discussed with Iran, he added.

Aliyev has also frequently called on Armenia to take a constructive approach. He urged recently that "a working group should be formed on the determination of the border" and that "preparations should be made for a peace agreement” with Armenia.

If Armenia does not give up its "hostile policies," it will not be able to regain its military or economic powers, said the president during a speech to mark the 103rd anniversary of the Azerbaijan Armed Forces, where he met with the army command and senior officers.

Armenian Prime Minister Nikol Pashinian said Friday that it is receiving positive signals from Turkey and his country is ready to also respond in a positive manner.

Pashinian spoke on his evaluations of the agenda items at a government meeting in Armenia's capital Yerevan.