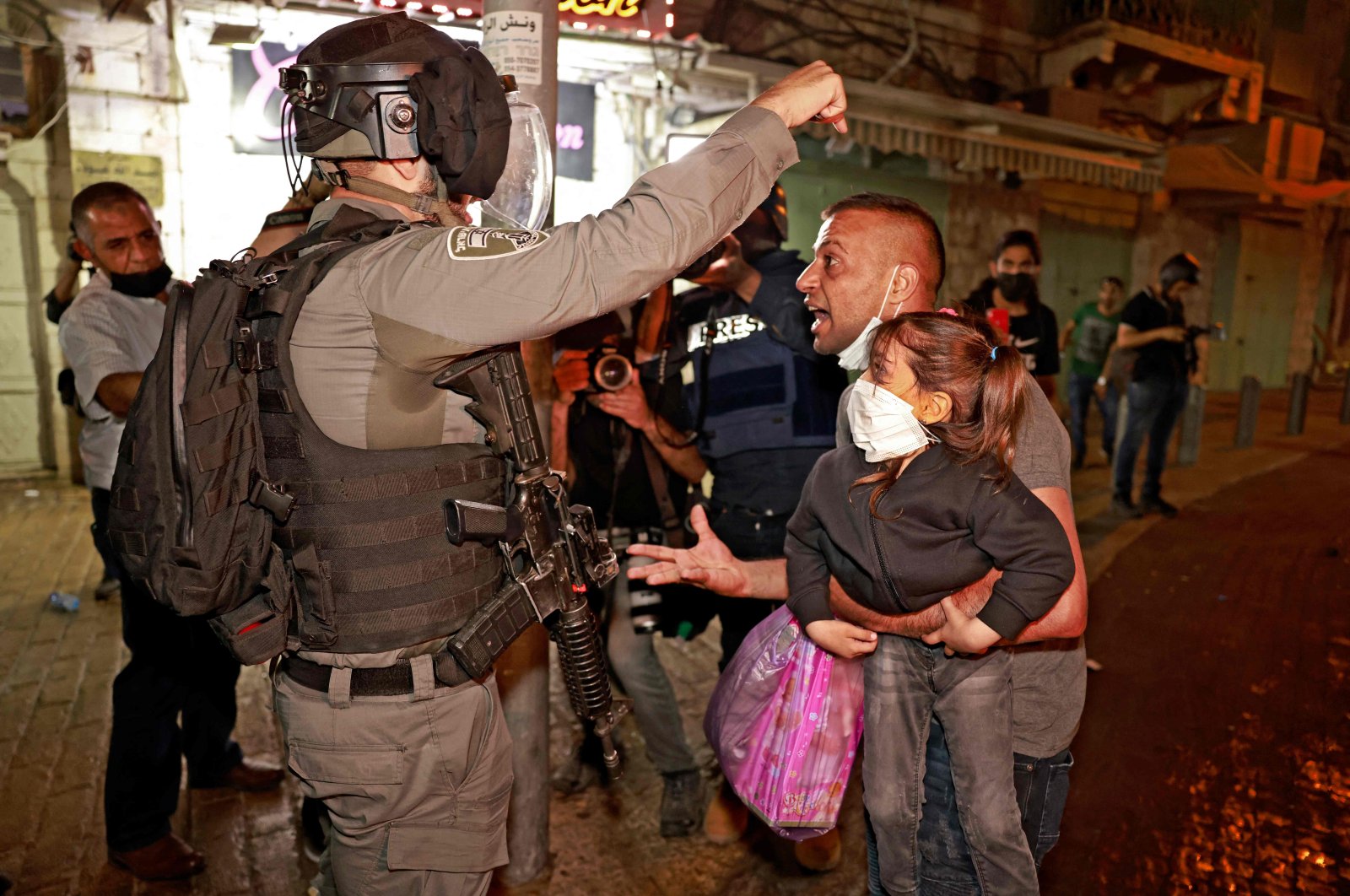 A member of Israeli security forces argues with a Palestinian protester holding a child outside the Damascus Gate in Jerusalem's Old City, East Jerusalem, occupied Palestine, May 9, 2021. (AFP Photo)
by DAILY SABAH May 10, 2021 10:26 am

Turkish officials Monday urged global powers to speak up and take action against Israeli violence targeting peaceful Palestinians in Jerusalem, underlining that Turkey will strive to take initiatives in this regard. Meanwhile, diplomatic sources told Daily Sabah that Turkey will intensify diplomacy for Palestine with members of Organisation of Islamic Cooperation (OIC), bring Israeli attacks to the table in the United Nations Security Council (UNSC) meeting and will also hold meetings with world leaders and members of the UNSC.

"We condemn Israel's continued intervention in #AlAqsaMosque with sound bombs and force, and we expect these attacks to end as soon as possible," Turkish Ministry of Foreign Affairs also said in statement.

"The only way to prevent this and similar events in the occupied territories is to hold #Israel responsible for these actions in the international area."

Foreign Minister Mevlüt Çavuşoğlu also pledged to defend the rights of the Palestinian people against Israeli violence in Jerusalem.

"Israel's violence in Al-Aqsa Mosque against innocent people does not end," Çavuşoğlu said on Twitter, adding that those who do not speak up against the violence should not discuss peace in the Middle East.

He expressed Turkey's solidarity with the Palestinian people, saying it "will continue to be the voice of our Palestinian brothers and sisters and defend their rights!"

Israel's violence in Al-Aqsa Mosque against innocent people does not end.

Those who do not speak out against this atrocity should not talk about Middle East Peace Process.

Will continue to be the voice of our Palestinian brothers and sisters and defend their rights!

Later on the same day, the Turkish Parliament also condemned Israeli attacks against the Al-Aqsa Mosque in a statement signed by all political parties in the assembly.

He continued by saying that Turkey will continue to fight the oppressive system even if it is left alone.

"Turkey has had a strong fight against this tyrannical order so far under the leadership of our President Recep Tayyip Erdoğan," he added.

Israel must stop attacking Palestinians in Jerusalem and prevent the occupiers/settlers from entering the Holy Mosque. Israel bears sole responsibility for any violence. The world must act to stop this never-ending Israeli aggression against unarmed civilians in their own land.

In a separate tweet, Kalın also said Turkey has been taking initiatives at all levels to stop Israeli aggression.

"Israeli authorities are responsible for all types of attacks, violence and incidents against Palestinians," Kalın said.

"The international community should say stop to the Israeli state's and extremist groups' reckless and irresponsible practices," Kıran said on Twitter.

The ruling Justice and Development Party (AK Party) Spokesperson Ömer Çelik noted that Israeli aggression against Palestinians has been increasing as he warned “fanatics” are preparing for an occupation outside the Al-Aqsa Mosque.

“This is oppression and reckless lawlessness. The world must say stop,” Çelik said.

He continued by saying that “fanatics” who speak of occupying Al-Aqsa and taking over Jerusalem have been carrying out all sorts of inhumane acts and calls for restraint will only encourage them to pursue their goals. He also said such calls cover up the truth that the other side is the victim.

Calling Israel a "terror state," AK Party Group Deputy Chairperson Numan Kurtulmuş said it does not only occupy Al-Aqsa Mosque but also "slaughters humanity." He continued by criticizing the global community's silence, saying that international institutions should mobilize and take action to stop the violence.

The opposition in Turkey also joined the calls against Israel's oppression. The main opposition Republican People's Party (CHP) Deputy Chairperson Seyit Torun criticized Israeli aggression, saying that this is unfortunately not the first time Palestinians are subject to such violence.

He highlighted the necessity of taking necessary initiatives to immediately solve the problem.

President Recep Tayyip Erdoğan had criticized Israel on Saturday, saying that Israel carries out such attacks each year during Ramadan.

"We strongly condemn Israel's heinous attacks against our first qibla Al-Aqsa Mosque, that are unfortunately being carried out every Ramadan," Erdoğan said on Twitter.

"As Turkey, we will continue to stand by our Palestinian brothers and sisters in all circumstances," he added.

"Cruel Israel, terror state of Israel, has been violently and immorally attacking the Muslims in Jerusalem, who dream of nothing but protecting all the things they deem sacred, the homes they have inherited [from their families] for thousands of years, their lands," he also said.

Hundreds of people demonstrated in support of Palestinians on Sunday evening outside Israel's consulate in Istanbul.

Prayers will be performed in all mosques across Turkey for the salvation of Al-Aqsa Mosque in occupied East Jerusalem after the noon prayer, the head of Turkey's top religious body also said Monday.

Speaking to reporters in northwestern Sakarya province, Ali Erbaş said sala prayers will be recited across the country as well.

Condemning the attacks in the Old City of Jerusalem, Erbaş said, "The occupying terrorist state Israel is up to the ugliest attempt against Al-Aqsa Mosque."

He added: "There is a genocide being conducted against innocent Palestinian people in front of the all the world's eyes." He also said prayers will be made against the oppression of the cruel.

Some nongovernmental organizations in the capital Ankara also released a joint statement on Monday and accused Israel of being a terror state run by an apartheid regime under the leadership of Zionist gangs.

They said that Israel's attitude targeting those who oppose this terrorism and Zionist ideology has not changed since its foundation.

Turkish officials' remarks matched those of the Al-Aqsa Mosque's director, who called for help from the Islamic world through Haram al-Sharif's speakers amid Israeli police incursion.

"Extremist Jews will not enter Haram al-Sharif (the main building of Al-Aqsa) before trampling on our bodies," he stressed.

Stating that the Israeli police violated the sanctity of Haram al-Sharif, he addressed the Islamic world, "Where is your honor?"

The attack on Islam's third holiest site and around East Jerusalem, which injured over 200 Palestinians and 17 police officers over the weekend, came amid mounting anger over the planned evictions.

Israel occupied East Jerusalem during the 1967 Arab-Israeli war. It annexed the entire city in 1980, in a move that has never been recognized by the international community.