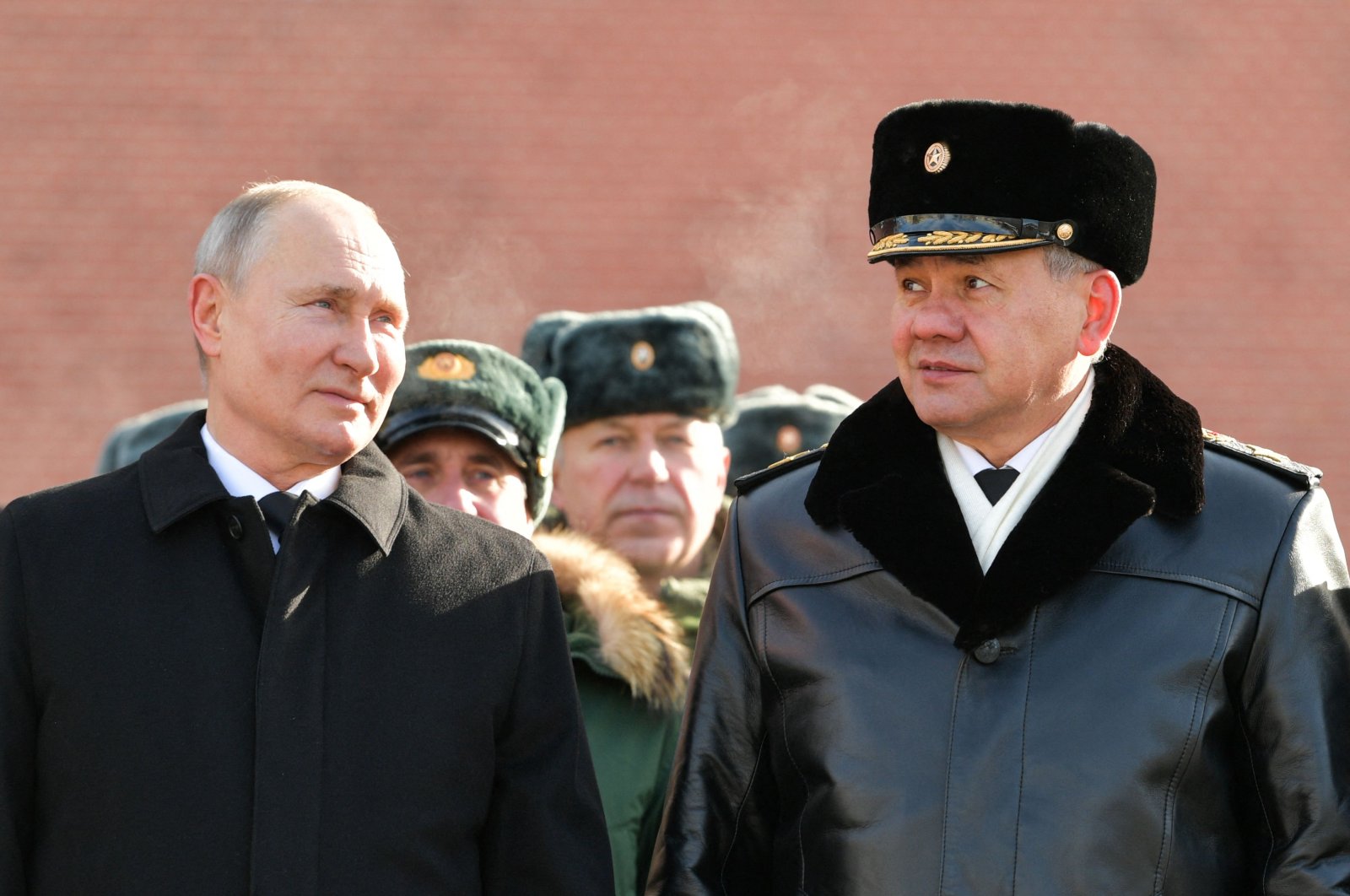 Russian President Vladimir Putin (L) and Defense Minister Sergey Shoygu (R), attend a tribute ceremony at the Tomb of the Unknown Soldier by the Kremlin Wall to mark Defender of the Fatherland Day, in Moscow, Russia, Feb. 23, 2021. (AFP Photo)
by DAILY SABAH Mar 18, 2021 11:39 am
RECOMMENDED

"Of course, this (membership) is an impediment. But in itself it is, I would say, a unique experience when one country is in NATO, another country is not a member of NATO. They find a common ground. They conduct joint work and joint operations. They find compromises where it seems impossible. But we are finding solutions," Shoygu said in an interview with the Kazakh Tengrinews website.

Shoygu also praised the establishment of de-escalation zones in Syria as "a new page and a new mechanism for resolving such conflicts."

Turkey and Russia patrol the northeast of Syria, fight against terrorism, work in the airspace, control passages and deal with refugees, Shoygu added.

"This is a difficult, complex job. I will not talk about that some are trying to impose sanctions (against Turkey), and in some parts, they have already been imposed against Turkey by its own NATO partners," he noted.

Turkey and Russia reached a deal on Idlib in 2018, in which acts of aggression are prohibited in the de-escalation zone.

Turkey and Russia, which back opposing sides in Syria's war, once again agreed on March 5 last year to halt military activity in the northwestern Idlib region after an escalation of violence brought the two sides close to confrontation. As part of the agreement, Turkish and Russian forces have been carrying out joint patrols along the M4 highway linking Syria's east and west, establishing a security corridor on either side.

Shoygu also recalled that peace in Nagorno-Karabakh was reached thanks to Russian-Turkish efforts.

"The latest work is, of course, Nagorno-Karabakh. This is a very difficult operation. That's what I'd like to call it and nothing else. Because it involved a huge number of arguments, elements and motives," he stressed.

Turkey and Russia signed an agreement to establish a joint observation center in Nagorno-Karabakh after Armenian forces departed Azerbaijani territories as part of a peace deal signed in late 2020.

Nagorno-Karabakh lies within Azerbaijan but had been under the occupation of ethnic Armenian forces backed by Armenia since a separatist war there ended in 1994. That war left not only Nagorno-Karabakh itself but large chunks of surrounding lands in Armenian hands.

In 44 days of heavy fighting that began on Sept. 27, the Azerbaijani military routed Armenian forces and wedged deep into Nagorno-Karabakh, forcing Armenia to accept a Russia-brokered peace deal that took effect Nov. 10.

The agreement saw the return of a significant part of Nagorno-Karabakh under Azerbaijan's control and also requested Armenia to hand over all of the regions it held outside the region.

Turkey has frequently voiced its determination to work on the preservation of the November cease-fire in the Nagorno-Karabakh region while boosting efforts for the restoration of the area.

As a result, people stopped killing each other, and conditions were created for Armenia and Azerbaijan to start bilateral contacts, Shoygu also said.

"And here, of course, much depends on the relations that have developed between Russia and Turkey. New players also appear, old neighbors appear, but they appear with their own proposals. I mean Iran. This is the development of infrastructure, this is the railway, this is hydroelectric power and transport links. Lots of questions," he added.