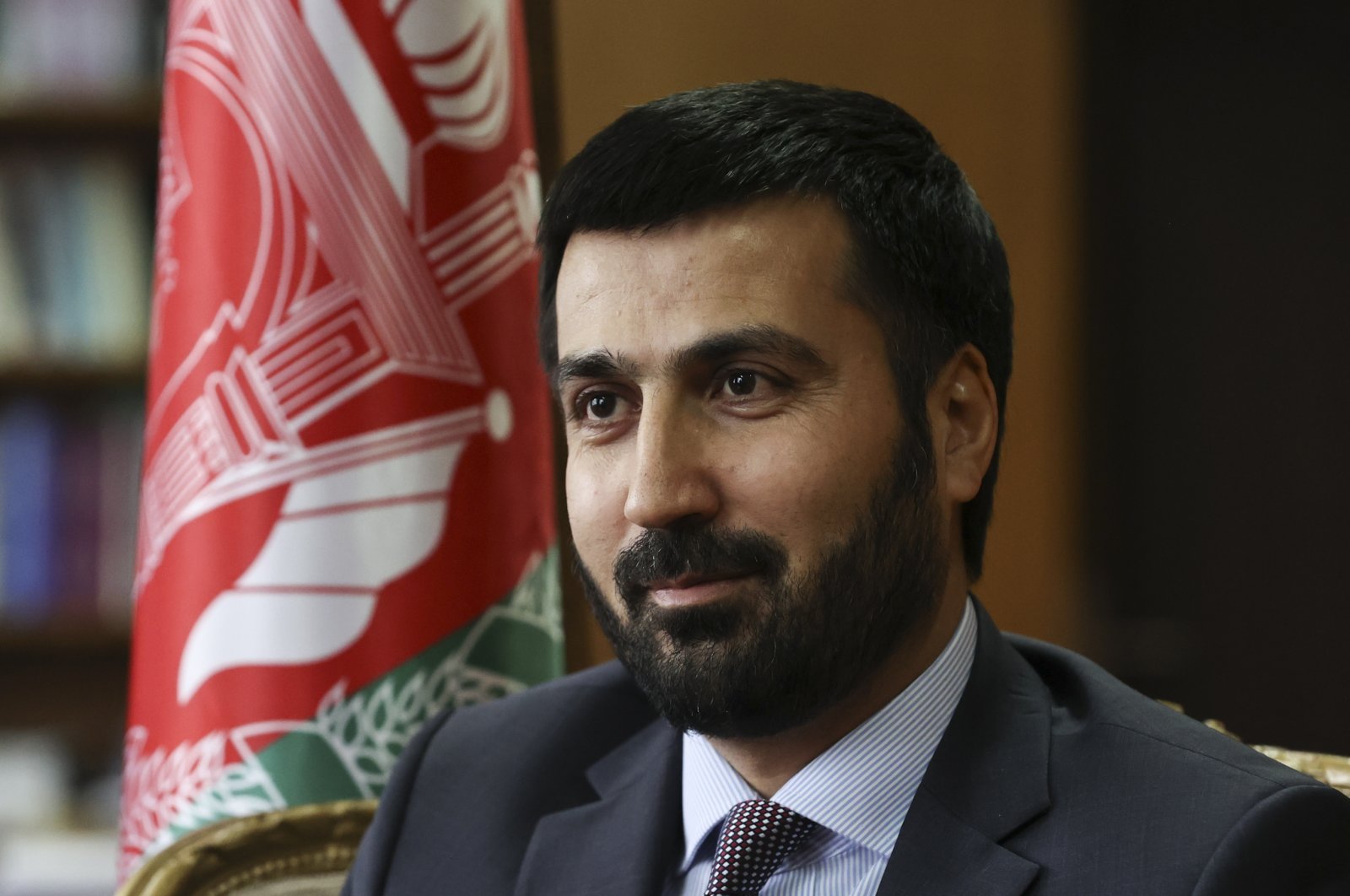 Underlining the importance of Turkey's strong ties with the country, the Afghan ambassador expressed hope for the success of the upcoming peace talks in Istanbul

Turkey has great potential to step up the peace process in Afghanistan and the upcoming peace talks in Istanbul slated for April will hopefully pave the way for a cease-fire first, then an agreement on fair and sustainable peace, the Afghan ambassador to Turkey said Friday.

Ramin went on to say that the first of these initiatives took place in February 2018 when President Ashraf Ghani offered unconditional peace talks with the Taliban through a conference and added: "Since then, we have continually called for dialogue as the best way to end the violence ongoing in Afghanistan."

One of the peace initiatives was the talks in Doha, Qatar, and the Afghan government fully supported the peace process and actively participated. However, according to the Afghan diplomat, the initiative later turned into a stalemate and no progress was made.

Thanks to Turkey's strong historical and cultural ties and mutual trust with Afghanistan, the Afghan ambassador believes Ankara has "great potential" to help facilitate progress in the peace process.

"We considered Turkey the most relevant, the new and most relevant actor given, given the mutual trust, to host this important event that we all hope to be able to lead to cessation of violence, and ultimately, (to) sustainable and just peace of Afghanistan," he said.

"We haven't had progress in Doha. And I think having the Istanbul meeting, we expect, would help overcome and address this stalemate. And I believe that Turkey will facilitate the environment for the intra-Afghan talks to continue," he added.

It was reported earlier this month that Turkey would be asked to host a senior-level intra-Afghan peace meeting in the coming weeks to finalize a peace agreement, U.S. Secretary of State Antony Blinken said in a letter to Afghanistan's Ghani. Following the news, Turkey expressed its readiness to take part in mediation efforts to establish peace in Afghanistan and the region.

Regarding the U.S.' recent offer to the Turkish government to host a senior-level meeting between Afghan government representatives and the Taliban in the coming weeks to finalize a peace agreement, Foreign Minister Mevlüt Çavuşoğlu had noted that Turkey had been involved in the process since the beginning, adding that he believes that Turkey will contribute significantly to the meeting, which is set to be held in Istanbul in April.

This week, the head of the United Nations' support mission also said that the upcoming intra-Afghan meeting in Turkey is a key opportunity for the Afghan government and Taliban to come to agreements on fundamental outstanding issues.

Emphasizing that Turkey had constructive and strong ties not only with Afghanistan but also with regional countries as well as with the U.N. Security Council member countries, Ramin further noted that such relations could help the peace process gain momentum. "The key expectation is that Istanbul will hopefully lead to a sustainable and just peace," he said.

"But we are, obviously, realistic. We know that there are challenges, there are difficulties. We know that our friends in Turkey will do their best to deliver upon these expectations of the Afghan people."

Although the peace initiatives, including those in Doha and Moscow, did not entirely eliminate the violence in Afghanistan, the Taliban did not target foreign forces in the country as part of its deal with the U.S., but it still continued to kill Afghan civilians, according to the ambassador.

He said: "So the Doha agreement did not deliver the key expectation of the Afghans, which was the cessation of violence. I think the first and important expectation is to see a cessation of violence, end the violence in Afghanistan. And the second important expectation is that this will preserve the gains that Afghanistan has achieved over the past 20 years. These are democratic gains. And the core of this democratic gain is the will of the people."

Asked about the U.S. motives to hold peace talks in Turkey's metropolis Istanbul and whether this would have any positive impact on the resolution of the conflict in Afghanistan, the ambassador said both the Afghan nation and the government sought to have the peace talks in Turkey, and Afghan officials requested Turkish counterparts to play a more active role in support of the peace process amid discussions in Ankara.

"Along with the request and expectation from the international community, Turkey is also delivering on the expectation of the Afghan government and the people of the country. And it's a very positive role and we welcome this very warmly," he said.

The details of the peace talks in Istanbul are yet to be finalized, but the Afghan president clearly demonstrated his will to take part in the meeting in Istanbul if the Taliban participates in the meeting at the leader level, according to the envoy, who said foreign ministers, as well as senior representatives of the U.N. and EU, will also be present at the meeting.

Also, he said the official date was still not set, but the related authorities are working to make sure the gathering is held around mid-April.

Underlining that peace in Afghanistan meant stability in the region that would benefit everybody, including Turkey, the Afghan envoy said the elimination of violence in the war-weary country would halt irregular migration and pave the way for economic cooperation in the region stretching from Turkey to the Caucasus, Central Asia and Pakistan.

Responding to a question on the prioritization of conflicting sides in Afghanistan, with the Afghan government focusing on stopping the violence and the Taliban pointing to a transitory government, Ramin said: "So one very key principle, not only in the government, but the people in Afghanistan want to see preserved and protected, is the will of the people. And that is best reflected through an electoral process or through elections. So elections are a must."

"Now, we have to have agreement firstly, and then discuss the details of how this agreement can be implemented. We cannot go to a scenario situation ... whatever you call it, transition or interim, without having the prospect and clarity on what is going to be (in) this agreement," the envoy added.

The ambassador also said his appointment to Turkey was a "conscious decision," and he was excited to serve his country in the Turkish capital Ankara because he believed there was "enormous potential" to expand cooperation between the two countries sharing brotherly ties.

"In Afghanistan, every Afghan considers themselves a Turk at heart," he said, adding that both ordinary Turkish citizens and officials had "very, very strong" feelings and sympathy for Afghanistan. "I consider myself blessed to be in Turkey."

According to the diplomat, both Mustafa Kemal Atatürk, the founder of Turkey, and former Afghan King Amanullah Khan significantly contributed to the development of solid and positive bilateral relations.

President Ghani’s security adviser, Mohammad Mohaqiq, also told AA that the people of Afghanistan expect that the upcoming talks in Istanbul will result in peace.

Appreciating Turkey's recent efforts for stability in the war-torn country, Mohaqiq said that Turkey can be effective for a quick solution in the Afghan peace process

Ankara recently stated that Turkey will continue to support Afghan security. Turkey has been contributing to the security of Afghanistan and will keep its presence in the country as long as its Afghan brothers demand it, Çavuşoğlu said earlier this month, marking the 100th anniversary of diplomatic relations between the two countries.

Turkey has played an active role in Afghanistan. The Turkish Parliament in late 2020 approved a motion to extend the deployment of Turkish troops in Afghanistan for 18 months as part of NATO's support mission in the war-torn country. Ankara sent troops to Afghanistan to support the NATO-led mission Resolute Support.

After ending the 17-year combat mission in Afghanistan in 2018, the mission has evolved and Turkish forces now train and advise the nascent Afghan security forces. Around 12,000 foreign troops from 28 NATO allies and 14 other partner nations agreed to support the NATO mission in Afghanistan. The legislation that was first passed in 2015 also grants the government the authority to permit foreign army personnel to be transported to and from Afghanistan through Turkey.