Turkic states stand by Kazakhstan with all their means: FM Çavuşoğlu 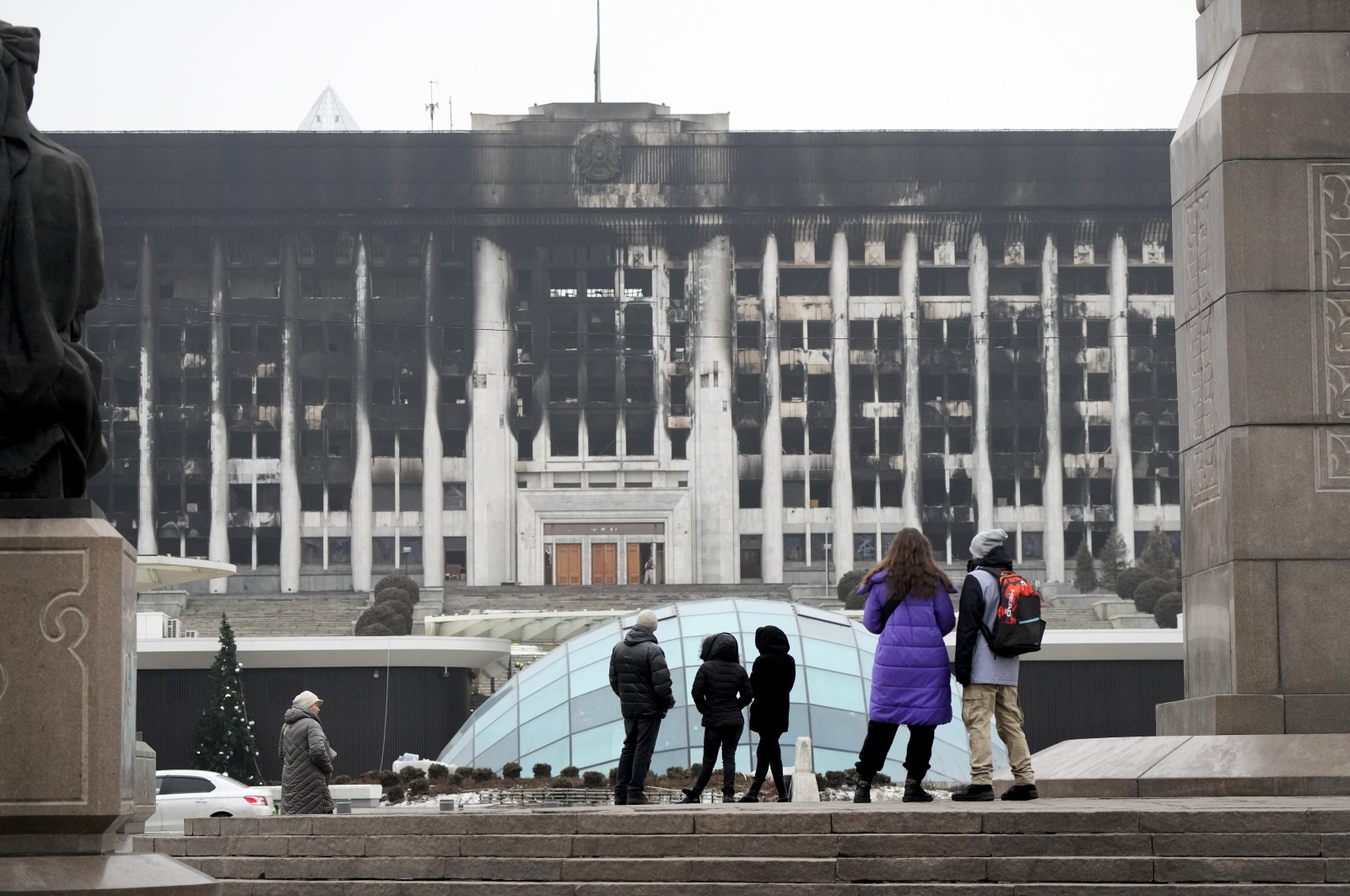 People look at the burnt city hall building in the central square blocked by Kazakh troops and police in Almaty, Kazakhstan, Jan. 11, 2022. (AP Photo)
by daily sabah Jan 11, 2022 11:37 am
RECOMMENDED

Turkic nations stand behind Kazakhstan with all their resources and full support, Foreign Minister Mevlüt Çavuşoğlu told a meeting of Turkic states on Tuesday.

Speaking at an extraordinary virtual meeting of the Organization of Turkic States, Çavuşoğlu also said that Turkey welcomes the appointment of a new prime minister and the easing of tensions in Kazakhstan after countrywide violence last week.

The virtual meeting of the foreign ministers was chaired by Çavuşoğlu, with Kazakhstan's Mukhtar Tileuberdi, Kyrgyzstan's Ruslan Kazakbaev, Abdulaziz Kamilov of Uzbekistan, and Peter Szijjarto of Hungary in attendance.

A joint statement following the meeting conveyed the member state's condolences for those who lost their lives during the unrest and wished recovery for the injured.

The organization condemned the acts of violence which it said "undermines public order".

It also stressed the "importance of upholding the basic norms and principles of international law and supported the counter-terrorist operations of the Government of Kazakhstan against terrorists, radicals, extremists and criminals, who aim to destroy Constitutional order."

The member states "reiterated their readiness to support the people and Government of Kazakhstan, as needed, to overcome the current crisis."

They also agreed to "remain in close cooperation and consultation" with Kazakhstan, and expressed support for the reform agenda of Kazakh President Kassym-Jomart Tokayev "to further increase the well-being and prosperity of the brotherly people of Kazakhstan."

The Organization of Turkic States includes Turkey, Kazakhstan, Azerbaijan, Uzbekistan, Kyrgyzstan, as well as Turkmenistan and Hungary as partners.

On Sunday, Çavuşoğlu had said Turkey will help Kazakhstan establish peace and stability as soon as possible.

He said Turkey hoped Kazakhstan will soon restore peace in the country.

"For this, we will provide all kinds of support as Turkey and the Organization of Turkic States,” he added.

Kazakh President Tokayev named Alikhan Smailov as the new prime minister on Tuesday, after having dismissed the government during the protests last week. The Kazakh Interior Ministry said 9,900 people have been detained over the violence.

Long seen as one the most stable of the ex-Soviet republics of Central Asia, energy-rich Kazakhstan is facing its biggest crisis in decades after days of protests over rising fuel prices escalated into widespread unrest.

The focus of the protests in the oil and gas-rich former Soviet republic had been on Almaty, located in the southeast of the country. Almaty is Kazakhstan's economic epicenter and biggest city.

After gas prices in Kazakhstan doubled on Jan. 2, triggering protests, President Tokayev declared a state of emergency in Almaty and Mangystau before expanding it nationwide.

Tokayev also approved the resignation of the government and requested support from the Collective Security Treaty Organization (CSTO), a Eurasian alliance of former Soviet states, which sent troops to quell the unrest.

It is not clear how many troops are being deployed under the force – which includes units from Russia, Belarus, Armenia, Tajikistan and Kyrgyzstan – but media in Moscow have said the Russian contingent is expected to number less than 5,000.

Most recently, Tokayev said Tuesday that a contingent of Russia-led forces would begin leaving the troubled Central Asian country in two days, with the pullout to take no more than 10 days.

Protesters stormed government buildings and engaged in battles with police and the military, with officials saying 748 security officers were wounded and 18 killed. However, Tokayev said Friday that constitutional order had been for the most part restored.

Turkey has sought closer ties with Turkic-speaking Central Asian states such as Kazakhstan since the Soviet Union's collapse in 1991.

Welcoming support from Turkey and the Organization of Turkic States, Kazakhstan is currently striving to achieve peace and order with new reforms on the way after days of protests across the country, the nation's ambassador also highlighted.

As the unrest in Kazakhstan starts to ease, the country will engage in busy reforms in the socioeconomic and political realms to address the concerns of the people while investigating the criminal acts and powers behind the recent incidents, the nation’s Ambassador to Turkey Abzal Saparbekuly said Friday.

“In general, the situation in all cities is calm. The people of Kazakhstan have seen that these protests, which started in a peaceful manner, have exceeded the limits in Almaty,” Saparbekuly told Daily Sabah in an exclusive interview, referring to the widespread looting, attacks and storming of administrative buildings during the unrest.